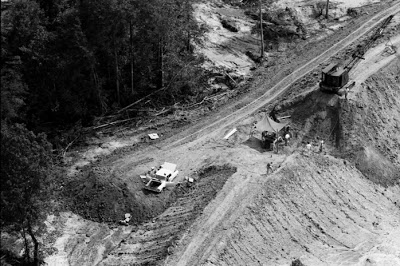 August 1964: An earthen dam where bodies of Chaney, Goodman , and Schwerner were found. Federal agents can be seen collecting evidence. Photographer Bill Eppridge was not allowed access to the site so he rented a helicopter and flew overhead to get this picture. Â© Bill Eppridge


On June 21, 1964, three young civil rights workersâ€”a 21-year-old black Mississippian, James Chaney, and two white New Yorkers, Andrew Goodman, 20, and Michael Schwerner, 24â€”were murdered near Philadelphia, in Nashoba County, Mississippi. They had been working to register black voters in Mississippi during Freedom Summer and had gone to investigate the burning of a black church. They were arrested by the police on trumped-up charges, imprisoned for several hours, and then released after dark into the hands of the Klu Klux Klan who beat and murdered them. It was later proven in court that a conspiracy existed between members of Neshoba County's law enforcement and the Ku Klux Klan to kill them.

LIFE magazine sent Bill Eppridge to Neshoba County, Mississippi immediately after the news broke. There are no pictures of the crime - just the brutal aftermath, and the devastating grief and sorrow brought upon one family. 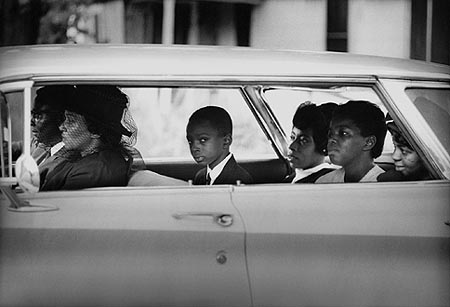 Bill Eppridge: The Chaney family as they depart for the burial of James Chaney, Meridian, Mississippi, August 7, 1964


The FBI arrested 18 men in October 1964, but state prosecutors refused to try the case, claiming lack of evidence. The federal government then stepped in, and the FBI arrested 18 in connection with the killings. In 1967, seven men were convicted on federal conspiracy charges and given sentences of three to ten years, but none served more than six. No one was tried on the charge or murder. The contemptible words of the presiding federal judge, William Cox, give an indication of Mississippi's version of justice at the time: "They killed one ni---r, one Jew, and a white man. I gave them all what I thought they deserved." Another eight defendants were acquitted by their all-white juries, and another three ended in mistrials. One of those mistrials freed Edgar Ray "Preacher" Killenâ€”believed to be the ringleaderâ€”after the jury in his case was deadlocked by one member who said she couldn't bear to convict a preacher.


Related: Neshoba: The Price of Freedom

The photographs will also be featured in the exhibition "The Long Road: From Selma to Ferguson", Monroe gallery, July 3 - September 28, 2015.