LA Times: Steve Schapiro's photos in 'Then and Now' offer a mix of emotions 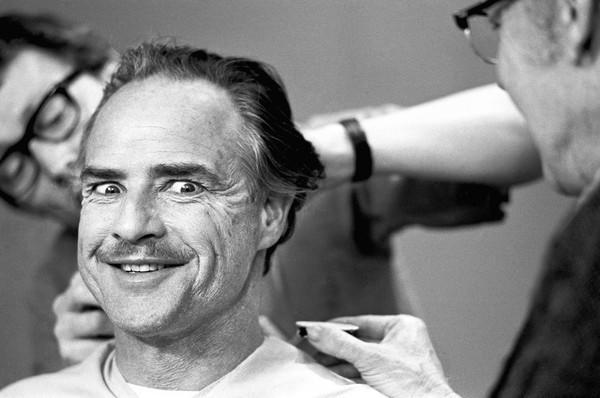 Via The Los Angeles Times
By Liesl Bradner
When photographer Steve Schapiro first arrived on the Lower East Side set of "The Godfather" in 1971, there were rumors floating around that Marlon Brando was not well. Moving closer to the action, he noticed an old man in an overcoat and hat talking to an assistant director with this gravelly, sick voice. The rumors must be true, he thought.

"Suddenly," Schapiro recalled, "Brando turns to the crowd with this enormous electricity shooting out of his eyes and in his best 'On the Waterfront' accent said, 'I think there's someone with a camera out there.'" That stunning transformation was just one of many Oscar-worthy moments Schapiro has witnessed in his 50-year career working on the sets of such groundbreaking films as "Taxi Driver," "Midnight Cowboy" and "Chinatown."

In "Steve Schapiro: Then and Now" (Hatje Cantz) the 78-year-old pairs candid photos and portraits of Hollywood celebrities alongside artists, musicians, civil rights activists and everyday people taken from the 1960s through 2011.

"I see a lot of celebrity books that don't excite me because they're just portraits," said Schapiro on a call from his Chicago studio. "We wanted to bring pictures together that work against each other or with each other by interjecting things which weren't necessarily film-related." For example, Jane Fonda clad in aerobics attire at the height of her fitness craze juxtaposed next to sumo wrestlers in Chicago in 2010 or Dustin Hoffman in a midair jump placed next to Roman Polanski in a flying-nun pose from 1968.

Of the nearly 150 photos, only 12 pictures have been published before, quite extraordinary for a photographer who has worked on more than 200 films and created 100 movie posters. The list of famous faces he's photographed reads like a history of the Academy Awards: Francis Ford Coppola, Jodie Foster, Sophia Loren, Martin Scorsese and nominee Robert De Niro, up for his third golden statuette at Sunday's ceremony.

Whether it's a candid between-scenes shot or an intimate picture in the comfort of home, Schapiro's aim is to capture the spirit and sense of his subject. "I try to be a fly on the wall as much as possible," he said. "For me emotion is the strongest quality in a picture."

One of the more interesting discoveries he made was an unearthed negative of a young Muhammad Ali (then known as Cassius Clay) meeting his future wife Lonnie for the first time in 1963. On assignment for Sports Illustrated, the black-and-white image Schapiro shot reveals a shy, ponytailed 6-year-old girl, just one of a gaggle of neighborhood kids hanging out on the stoop with Ali outside his parent's house in Kentucky.

Growing up in Brooklyn, Schapiro was influenced by Henri Cartier-Bresson and studied under W. Eugene Smith. He began as a photojournalist during the turbulent '60s. After photo-centric publications such as Life and Look folded in the early '70s he turned to film, working as a special photographer, an industry term for a contractor hired for publicity and marketing. His photograph of Mia Farrow from "The Great Gatsby" was on the first cover of People magazine