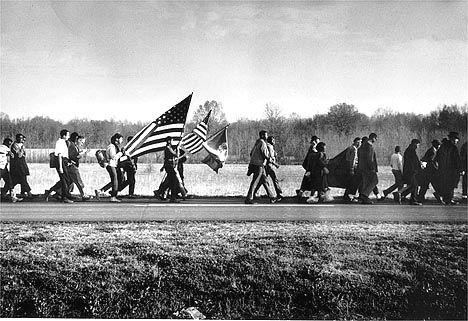 Steve Schapiro: On the road, the Selma March, 1965
Civil rights organizations launched a registration drive in Selma, Alabama, a small city about 50 miles west of Montgomery. There were about 15,000 blacks residing in Selma, but only 350 had successfully registered to vote. At a February 1965 voting rights rally in nearby Marion, police shot and killed a young black man named Jimmie Lee Jackson.
In response, activists called a March 7 march from Selma to the Alabama state capitol at Montgomery. Led by John Lewis of SNCC and Martin Luther King’s aide, the Reverend Hosea Williams, some 525 marchers were met on the Pettus Bridge over the Alabama River by Alabama state troopers and local lawmen. They had gas masks at hand and nightsticks at the ready. The trooper leader (Major John Cloud) ordered the marchers to return to their church. Reverend Williams answered: “May we have a word with the major?” “There is no word to be had,” came the reply.
The suppression of the march, the New York Times reported, “was swift and thorough.” The paper described a flying wedge of troopers and recounted how “the first 10 or 20 Negroes were swept to the ground screaming, arms and legs flying.” With the news media on hand and recording their actions for a horrified national audience, the troopers fired tear gas canisters. Local law enforcement pursued the retreating protesters with whips and nightsticks. “I was hit in the head by a state trooper with a nightstick ... I thought I saw death,” said Lewis, hospitalized with a concussion.
For millions of Americans, March 7, 1965, would be known simply as Bloody Sunday. Typical was the reaction of U.S. Representative James G. O’Hara of Michigan, who called the day’s events “a savage action, storm-trooper style, under direction of a reckless demagogue [a reference to Alabama’s governor, George Wallace].”
From Atlanta, Martin Luther King Jr. announced that he and Ralph Abernathy would lead a second Selma to-Montgomery march that Tuesday. He called on “religious leaders from all over the nation to join us on Tuesday in our peaceful, nonviolent march for freedom.” Before the march could occur, a federal judge, not unfriendly to the activists but determined to hold hearings before acting, issued a court order temporarily forbidding the march.
King was under intense political pressure from every corner. Federal officials urged him to delay the march. With the judge’s injunction now in place, King and his followers would be the lawbreakers should the march proceed. But younger activists, many affiliated with SNCC, wanted to move faster. King risked losing his place at the head of the movement were he unable to satisfy their demands.
On March 9, King and Abernathy led some 3,000 peaceful protesters — their black followers joined by hundreds of white religious leaders — on the second Selma-to-Montgomery march. Troopers again met them at the Pettus Bridge. The marchers stopped, then sang the movement’s anthem: “We Shall Overcome.” The group then prayed, and Abernathy thanked God for the marchers who “came to present their bodies as a living sacrifice.” King then directed his followers to turn back. “As a nonviolent, I couldn’t move people into a potentially violent situation,” he told the Washington Post.
King’s decision disappointed some of the more zealous activists. But King had been conferring quietly with federal officials. The events of Bloody Sunday also had exerted great pressure on an already sympathetic President Johnson. Too many Americans at long last had seen enough. From religious groups and state legislatures, youthful protesters and members of Congress, the demand for federal action was growing. The two leaders appear to have struck a tacit bargain: King would not violate the injunction, and the Johnson administration quietly suggested it would soon be lifted.
On March 15, Johnson introduced the legislation that would become the Voting Rights Act. Addressing the nation that night, President Johnson employed the plainest of language in the service of a basic American value — the right to vote:
"There is no Negro problem. There is no southern problem. There is no northern problem. There is only an American problem.
And we are met here tonight as Americans … to solve that problem.
The Constitution says that no person shall be kept from voting because of his race or his color. We have all sworn an oath before God to support and to defend that Constitution.
We must now act in obedience to that oath. …
There is no constitutional issue here. The command of the Constitution is plain. There is no moral issue. It is wrong — deadly wrong — to deny any of your fellow Americans the right to vote in this country. There is no issue of States rights or National rights. There is only the struggle for human rights. …
What happened in Selma is part of a far larger movement which reaches into every section and State of America. It is the effort of American Negroes to secure for themselves the full blessings of American life.
Their cause must be our cause too, because it is not just Negroes but really it is all of us who must overcome the crippling legacy of bigotry and injustice. And we shall overcome.
Two days later, the federal court lifted the injunction against the marchers. U.S. District Judge Frank M. Johnson Jr. further ordered that state and county authorities not interfere and indeed take affirmative measures to protect the activists. “The law is clear,” the judge wrote, “that the right to petition one’s government for the redress of grievances may be exercised in large groups … and these rights may be exercised by marching, even along public highways.”  --Via America.gov
In 1966 the Selma-to-Montgomery National Historic Trail was created by Congress under the National Trails System Act of 1968.

Marchers cross the Alabama river on the Edmund Pettus Bridge at Selma on March 21, 1965. The civil rights marchers, eight abreast, were led by Dr. Martin Luther King Jr.
The msnbc Photoblog has more then and now photographs.


Related: Imprisoned in a Luminous Glare: Photography and the African American Freedom Struggle