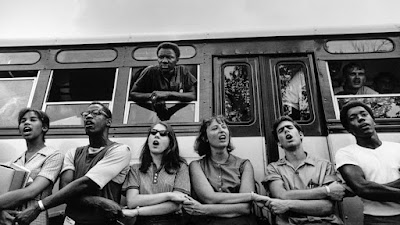 OXFORD â€” â€œA Lens For Freedom: Civil Rights Photographs by Steve Schapiroâ€ will be one of the three featured exhibitions on display this fall at Miami University Art Museum and Sculpture Park. The exhibitions will be on view through early December.

â€œâ€˜A Lens For Freedomâ€™ consists of 17 photos and three photo murals that are based on photographs of contact sheets that all pertain to civil rights photographs by Steve Schapiro with particular focus on developments leading up to and involving Freedom Summer,â€ said Jason Shaiman, curator of exhibitions at Miami University Art Museum.

Schapiro was there in the 1960s with his camera to capture some of the most iconic moments of the civil rights movement. Schapiro was also one of the leading photographers to document the historic 1964 Freedom Summer Campaign. His photographs are on view in the McKie Gallery.

â€œAt the Art Museum, we have been very involved in exhibitions and programs for a number of years that support civil rights and social justice, and weâ€™ve done other exhibitions pertaining to Freedom Summer,â€ Shaiman said.

This foundation for this exhibition really came about in 2019, when we worked with Steve Schapiro and his now widow, because unfortunately, Steve passed away in January of this year, of providing a partial gift as well as a museum purchase of 20 photographs. So, thatâ€™s where the 17 photos are from. We took the three contact sheets, and weâ€™ve blown them up as photo murals, he said.

â€œThis was a wonderful collaboration with Steve, because, as you might know, the grounds where the Art Museum stands is part of what used to be the Western College for Women. Now, itâ€™s considered the Western Campus for Miami University. In 1964, the Western College for Women hosted the two-week training for volunteers, who were going into the Deep South, particularly Mississippi, to support Black voter registration, and the setting up of Freedom Schools and Freedom Libraries,â€ Shaiman said.

Freedom Summer was hosted by Western College for Women.

The rest of the photos in the exhibition record what he was seeing and documenting in Mississippi, around the region of Neshoba County, which is where a lot of the trouble in Mississippi took place, Shaiman said.

â€œSteve had a diverse career. He really made a name for himself within civil rights photography. He took some of the most amazing photos of Dr. King, of people like John Lewis, Medgar Evers, Rosa Parks, and so many major figures in the civil rights movement, especially in the 1960â€²s. His involvement really started with James Baldwin, who was a very well noted writer, poet, speaker on the Black experience,â€ he said.

Baldwin introduced Schapiro to a lot of major civil rights figures, and that transformed his trajectory as a photojournalist, which continued through the 1960â€²s. In the 1970â€²s, he started working in Hollywood, and he was doing still photos on and off-set for a lot of major movies like â€œThe Godfather,â€ â€œTaxi Driver,â€ and a number of big-name films and he became very well known and respected for that work, which kept him busy for several decades.

â€œSchapiro has said in interviews, that as wonderful as those opportunities were, he still felt like his civil rights photos were his most important contributions to photography,â€ Shaiman said.

He said Schapiro was able to capture the individual personalities of the people that he recorded in his photos.

â€œHe had a unique approach,â€ Shaiman said, â€œThere was nothing that felt staged about his photos.â€

â€œHe was really capturing who these people were, and what they were fighting for, and I think his approach moved beyond photojournalism, and it really captured a sense of humanity of the people that he was photographing,â€ said Shaiman.

The exhibition and related programming are supported with a grant from FotoFocus as part of the FotoFocus Biennial 2022. The Art Museum also received support from Richard and Susan Momeyer. The exhibition is dedicated to the memory of Schapiro, who passed away on Jan. 15.

When: 10 a.m. to 5 p.m. Tuesday through Friday, noon to 5 p.m. Saturday and 10 a.m. to 8 p.m. the second Wednesday of each month. The exhibition will be on display through Dec. 10. Closed on Sundays, Mondays and university holidays.

Admission: Free and open to the public. Visitor parking passes are available at the museum.