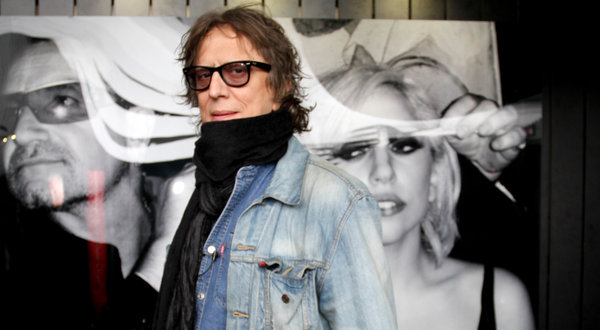 
COFFEE. Mick Rock, the rock ’n’ roll photographer as famous for his hedonistic lifestyle as for his iconic images of debauchery and excess, was drinking nothing more than coffee. It was 5 p.m. on a recent Tuesday, and while hotel guests drank cocktails at the lounge of the W New York Downtown, Mr. Rock, a slim and youthful man in his 60s in tinted glasses, got his fix.

“Sometimes when I really want to go wild, I’ll have two cups,” he said.

It was the night before “Rocked,” an exhibition of his photographs, was to open on Dec. 7 with a big party, featuring a performance by Phantogram and a D.J. set by Mark Ronson. On the walls in the lounge around him, Madonna, Mick Jagger and Dave Grohl of the Foo Fighters stuck out their tongues with confrontational glee. A young Iggy Pop (sweaty and shirtless, of course) worked some gold lamé pants. Lou Reed, Freddie Mercury and David Bowie leered under so much mascara they could have been raccoons.

Outside, beyond a balcony, the 9/11 memorial-in-progress gaped.

“It’s amazing, what’s going on down here,” Mr. Rock said of all the construction in a downtown he knew more for drug deals, illegal nightclubs and transsexuals, not patriotism and real estate speculators. “But I guess you just can’t keep New York down.”

You can pretty much say the same about him.

Born as Michael in West London, Mr. Rock was a typical good-looking bad boy of his day with a very nice mum named Joan, who sometimes still asks when he’s going to get a real job.

After rocketing out of Cambridge University in 1970, infatuated with Blake, Rimbaud, Verlaine, Mallarmé and poets who consumed as much opium and absinthe as sleep, he was drawn like a well-educated moth to the flaming scene of Syd Barrett, Roxy Music, David Bowie, the Sex Pistols and all types of punks and glam rockers in London. He then moved to New York in the mid-1970s to continue his career, photographing Blondie, the Velvet Underground, the New York Dolls, Joan Jett and other punk and big-hair bands.

“I was intuitive and lucky to be around,” he said. “I also looked like them, and that made it easier to accept me.”

As much the party instigator as chronicler, he would bounce up and down like a pogo-ing punk rocker while taking pictures, giddy as a child awaiting a gift. One time Andy Warhol pointed out that he was bouncing on a stack of Mr. Warhol’s finished canvases. “I guess you could just say I’m an enthusiast,” Mr. Rock said.

He was trustworthy, too, and did not sell photographs of drug abuse and other unseemly moments that could damage careers. But then, this was before the age of tear-down tabloids and blogs. “Newspapers and magazines didn’t want pictures of musicians behaving badly back then,” Mr. Rock said with a sunny working-class lilt. “Now, because of the Internet, that’s all the media wants.”

In his heyday, as he acquired his reputation as “the man who shot the ’70s,” he partied all night in New York with the stars he shot, dating the same women and sharing the same drugs. Many he knew fell to AIDS and heroin addiction. Others survived, and many thrived. “It’s a miracle that David Bowie, Lou Reed and Iggy Pop are actually still alive today, given how hard they lived,” he said.

After bouncing, drinking, drugging and staying up till dawn for 20 years, he hit bottom in 1996, at 48, when he had a heart attack requiring a quadruple bypass. He’d had several attacks right before that, one during a shoot. His lifestyle was catching up with him.

“It was a warning that it was time to stop,” he said.

He had no health insurance. But he had powerful friends who wanted to pay to save him.

He came out of the operation with a faltering career but a newfound determination to stay sober. He was not, to quote a Blondie lyric, going to “die young and stay pretty.”
Industry friends were supportive, as were musicians and galleries who drew from his archives to create books and exhibitions of his work. By the new millennium, he was starting to rebound, and soon was busy shooting Snoop Dogg, Alicia Keys and other young stars.

“I did not want to be somebody who lived off his reputation,” he said. “I wanted to continue to be part of the modern music scene.” It seems to have worked out very nicely.

Now he’s smart enough to let others stay up late and carry on, “although these days all they have to do to shock people is light up a cigarette,” he said. Despite his legacy, he isn’t one to live in the past. He adores the young musicians he shoots — Lady Gaga, Janelle Monáe, and Theophilus London among them — and gets only a little weary when asked about the bad old days.

“Back then, to pick up the hottest women you had to wear makeup,” he said.
Today, a denim jacket and a scarf or two make up his uniform. Mr. Rock said he doesn’t preen, drink, smoke or imbibe any drugs stronger than coffee with sugar and (gasp) half-and-half. He lives in a Colonial house with a picket fence on a leafy Staten Island street with his wife, Pati, and sometimes a daughter, Nathalie, 21, who he said is unimpressed with a father who has seen it all. He gets up early and does yoga every day.

“I’ll need to get a good night’s sleep tonight,” he said in the lounge at the W as he finished his coffee, took a quick tour of his exhibition and left to go up to his room. It was massage time.

“I know it’s disappointing,” he said. “But all I am is a retired degenerate.”
Fair enough. It won’t be that long before the man who shot the ’70s will be close to 70 himself.