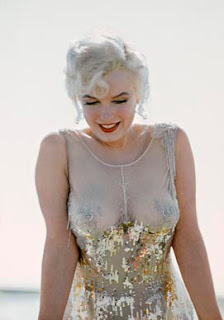 Richard Crump Miller was born on Aug 6, 1912. By 9 or 10, he had his own camera and started casting about for subjects. By 16, he'd built himself a darkroom off the garage at the family home in 1929, Dick was introduced to the Leica and Graflex cameras. He went on to study cinematography while attending, successively, Stanford University, Pomona College, and USC.

In 1939 Dick began his career as a photographer. Dick learned the tri-color carbro printing process out of a book. By using mirrors and filters, a one-shot camera creates three separate negatives in the camera with one shot. These separation negatives are then used to print the bromides for making a tri-color pigment print, or â€œcarbro.â€ Dick used the one-shot for a long time before switching to transparencies. Dick worked mainly in advertising and commercial photography. In 1941 the Saturday Evening Post purchased one of his photographs as a cover, one of only two photographic Post covers that year and the first that Dick had ever sold.


The photograph got Dick the attention of some NY agents and enabled him to sign up with the Freelance Photographer's Guild. Then came the war. At that point "you could either go into the service or get a war job," he remembers. So in 1941, looking for employment, Dick attended a group sales pitch presented by North American Aviation and Lockheed for the purpose of hiring wartime employees. Dick got a job in the photo department at North American and began at last to earn a steady income from his photography. At North American, he also met the photographer Brett Weston, with whom he formed a lifelong friendship. â€œIt was a great friendship,â€ Dick says now. â€œIt lasted the rest of my life.â€

Later,  Robert Coburn offered him an opportunity to join IATSE #659, the entertainment industry photographer's union, so that he could print color at Columbia. Dick declined, choosing to remain independent and to pursue his freelance work. "All during those years I worked weekends, selling to magazines. I sent them the Kodachromes."

In March and April 1946, Dick photographed a model provided through the Blue Book Models agency, run by Emmeline Snively from an office in the Ambassador Hotel. The model's name was Norma Jeane Dougherty. "She was a cutie, and they had sold some covers of her already," Dick says. He hesitated because the magazines did not like to use multiple covers using the same model. But he finally decided to hire her, and on March 2, Dick and Norma Jeane took a trip. He posed her leaning against a tree, then on the beach, and finally on a fence. They left the beach abruptly. "I remember the crowd was collecting very fast. A lot of men."

"I did not shoot her for very long. The market was already saturated," he recalls. But Dick did sell a cover of Norma Jeane to True Romance. "She was nice when she was Norma Jeane, very sweet. She came to dinner at the house. A nice, friendly girl." Then she went to work for the studios, eventually becoming Marilyn Monroe. Dick photographed her after she became a celebrity. "I met Marilyn Monroe again on Some Like It Hot. I was the still photographer." She smiled and said, "Hi, Dick

Dick continued to work for This Week, Liberty, Family Circle, Parents, American Weekly, Colliers, Life, and Time; as well as during the  '40s well into the late '50s documenting Hollywood. For seven decades, he made a living working for North American Aviation and later as stringer for Globe Photos, which kept him circulating in the universe of stars -- Elizabeth Taylor, James Stewart, Gary Cooper, Jayne Mansfield, Kirk Douglas, Tony Curtis, Jack Lemmon, Shirley MacLaine, Billy Wilder, Rock Hudson and Dennis Hopper among them. In time, he covered more than seventy films.

His first on-location assignment was for Giant (1955), where his job was to shadow James Dean. When Dean died, many pictures of him were sold, becoming iconic images since he and Dean had developed a close relationship based on a mutual interest in Porsches and photography.

In 2003 Dick was confined to a wheelchair due to degenerating bone in the cervical area of his spine. Although he retains the use of his hands to some degree, his ability to make prints and even operate his camera has been seriously curtailed.

Richard C. Miller's photographs were recently exhibited at The J. Paul Getty Museum; March 31, 2009 through 5 August 2009 in 2007. Watch our website for more of Dick's wonderful photography. 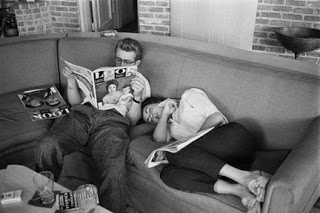 Richard C. Miller: James Dean and Elizabeth Taylor take a break during the filming of "Giant"
‹ PREVIOUS   |   NEXT ›