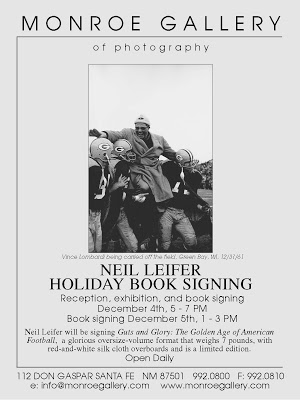 Santa Fe--Monroe Gallery of Photography, 112 Don Gaspar, is pleased to host a special exhibition and book signing celebrating Neil Leifer's most recent book, "Guts and Glory: The Golden Age of American Football”. The exhibition opens with a reception for the photographer on Friday, December 4, 5 - 7 PM, and Neil Leifer will sign books that evening and again on Saturday, December 5 from 1 to 3.

Leifer will also sign his earlier books, "The Best of Leifer"; "Portraits", and Baseball: Ballet in the Dirt". Supplies are limited.

Published by Taschen, "Guts and Glory" contains the best of sports photographer Neil Leifer's 10,000 rolls of football pictures, including hundreds of previously unpublished images. It is a glorious oversize-volume format that weighs 7 pounds, with red-and-white silk cloth overboards and is a limited edition of 1500 numbered and signed copies. Neil Leifer became a professional photographer while still in his teens. In 1958, he took the picture that remains one of his most famous to this day - Alan Ameche's game-winning "Sudden Death" in a game to this day called "The Greatest Ever Played," Beginning in 1960 as a freelancer, his pictures began regularly appearing in every major national magazine, including the Saturday Evening Post, Look, LIFE, Newsweek, Time and, most often, Sports Illustrated. By 1990, his photographs had appeared on more than 200 covers.

Neil Leifer is responsible for photographing many of the images we hold in our minds of the iconic figures of sports history. His unforgettable photograph of Muhammad Ali standing over a fallen Sonny Liston in 1965 has been called perhaps the greatest in sports history. 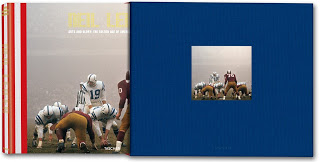