Never before exhibited photographs of Muhammed Ali on display in Austin

The Dolph Briscoe Center for American History at The University of Texas at Austin and the LBJ Presidential Library presents the exhibition “One Night in Miami”: From Photo to Film. 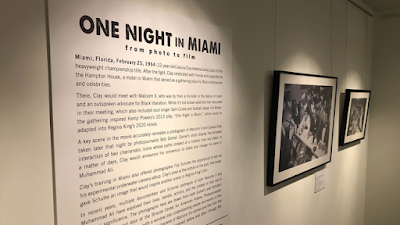 #TBT: Never before exhibited photographs of Muhammed Ali on display in Austin

Located in the LBJ Library’s Great Hall, the exhibit showcases iconic photos from the Briscoe Center’s collections that inspired key moments in the 2020 film.

It features a selection of images from Bob Gomel and Flip Schulke, famed photojournalists whose archives are housed at the Briscoe Center. The photos, many of which have never before been exhibited, depict a young Muhammed Ali (then known by his birth name, Cassius Clay) during the early years of his boxing career.

After his victory over Sonny Liston for the heavyweight championship in Feb. 1964, Ali celebrated with friends and supporters at the Hampton House, a motel in Miami that served as a gathering place for Black entertainers and celebrities.

There, Ali was joined by his friends Malcolm X, singer Sam Cooke, and football player Jim Brown, among others. The gathering inspired Kemp Powers’s 2013 play, “One Night in Miami,” which was adapted into Regina King’s award-winning 2020 movie. 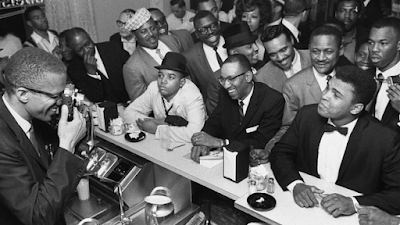 A key scene in the movie recreates Gomel’s photograph of Malcolm X and Ali in the Hampton House diner.

One of the opening scenes of the film was inspired by Flip Schulke’s famous photos of Ali taken in a Miami swimming pool in 1961. The shoot offered Schulke the opportunity to test out his experimental underwater camera setup.

In addition to a selection of rare photos from Gomel and Schulke, the exhibit features equipment from both photographers and related ephemera.

"One Night in Miami”: From Photo to Film runs until May 8, 2022. For more details on the exhibit, please go to: https://briscoecenter.org/exhibitions/one-night-in-miami/

The LBJ Library is open to the public. Admission tickets must be bought online in advance. For details, please go to: https://www.lbjlibrary.org/visit.