New local exhibition highlights the work of photojournalists on September 11 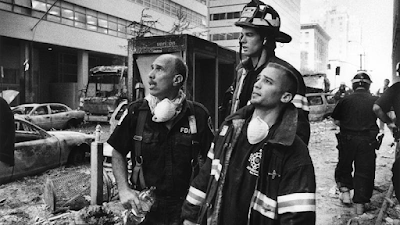 “This is the role they play”

New local exhibition highlights the work of photojournalists on September 11

Michelle and Sidney Monroe of Santa Fe’s Monroe Gallery of Photography were a mere nine blocks north of the World Trade Center on Sept. 11, 2001.

Back then, well before the Monroes moved to Santa Fe, their New York space was already highlighting the work of photojournalists around the world. Captivating images of joy, terror or all points in between is just part of the job, and you never know when they might flare into existence. Still, the aftermath of 9/11 stuck with the Monroes, and the gallery opens a new show this week about the history of the buildings themselves, as well as that most harrowing day in American history.

“I’m a New Yorker, and I remember [the towers] being built,” Sid tells SFR. “The exhibit traces that planning, construction, landscape and the aftermath of that day. It’s like a memory, a history of those buildings.”

The gallery is an extension of the Monroes’ long career in documenting photojournalism and the photographers who often risk their own lives to record history. 9/11: In Remembrance takes a look at that role but, beyond the national trauma, also attempts to capture how the World Trade Center represented American ingenuity in the 20th century.

“It’s definitive photojournalism,” Michelle explains. “We’ve been inspired to illustrate the calling of this career to understand history—and that’s our gallery mission.”

Photographers in the show include Tony Vaccaro, who catalogues a friendship with World Trade Center architect Minoru Yamasaki, and Eric O’Connell, who grabbed his cameras as the towers burned and caught crisp black and white images of the destruction.

“There are times when people become witnesses to history, and that changes you,” Sid explains. “We knew so many people that were lost, and people who lost others.”

As the 20th anniversary of 9/11 approaches, the images of that fateful day may be seared into our collective consciousness forever. But what about the photographers themselves?

“This is the role they play,” Michelle says. “This is history.”