Another highlight of our week in New York was meeting with Barbara Villet, widow of the late LIFE magazine photographer Grey Villet. 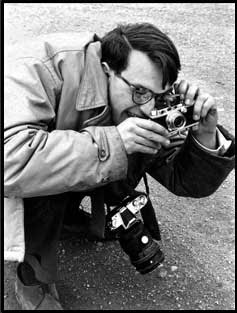 Grey Villet
In an era before any digital tinkering with his results was possible,Villet's was a technique that required intense concentration, patience and understanding of his subjects joined with a technical mastery that allowed rapid use of differing cameras and lenses to capture and compose the "right stuff" on film as it happened.

Grey Villet was born in a sheep herding center called Beaufort West in the Karoo desert of South Africa in 1927. While he was still a boy his doctor father moved the family to Cape Town where he grew up. His father expected him to follow him into medicine and Grey was duly enrolled in the pre-med program at Cape Town University. It didnt take; he spent most of his time at a cafe downtown where there was music and a lot of smoke...At about this time his sister's fiance gave him a camera and that did take...It was the excitment of seeing his own pictures emerge in a friend's dark room that set the course of his life.

By the late 1940's, his despairing father sent him to London to study photography---but after a few months Grey left school to earn a meager living doing wedding snaps outside the Registry while living in a trucker's stop hostel. At 20 he landed a job on the Bristol Evening News--and within 2 years had moved up to Reuters International in London on the strength of his newspaper work. At 24 he returned to South Africa and a job at the country's leading newspaper, the Johannesburg Star--but the pomposity of management's objection to his disheveled look after a night of chasing a rough news story decided his future. Already determined to become a "magazine photographer" he quit the Star on the spot and soon set off for New York hoping to land a chance at LIFE magazine. With no connections, little money, and a new wife who was expecting a child. he spent most of his time bending iron for a furniture wholesaler until he approached the personnel department at Time Inc. with his portfolio...They sent him to see John Bryson, then picture editor at Life who saw talent in his work and gave him the test assignment still titled in LIFE records as "Pigeon Man" 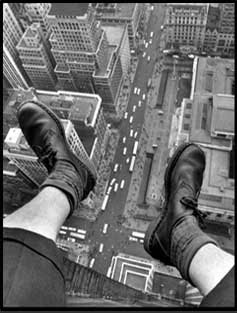 So it was that Grey's Villet’s career with LIFE magazine began in April of l954 on the outer ledge of a Manhattan skyscraper high above 42nd Street and 5th Avenue. He had come to this perilous perch when that trial assignment from Bryson to photograph a man said to feed thousands of pigeons at the New York Public Library had proven worthless. With hopes of working for the magazine in jeopardy, he had taken himself to a a nearby office building, ridden the elevator to a 55th floor and asked a group of office workers on lunch break to “take a picture out the window.” Folding his 6’4”frame out onto the narrow ledge,he leaned forward to shoot straight down over his dangling feet before horrified office workers could pull him to safety. Bryson found the resulting 3 images on the single contact sheet that the newcomer from South Africa turned in later that day. What he saw was not just a stunning image that LIFE week as its “Speaking of Pictures,” but precisely the sort of resourcefulness the editors looked for in photographers. In retrospect, Grey’s sensational edge of the ledge image could be viewed as a metaphor for what was to follow. Not only did it speak of the courage, ambition, and inventiveness that would carry him to the top of his chosen profession, but of the heightened perspective that working for LIFE would afford him for decades to come.

Within a year of being added to LIFE’s legendary roster of photographers in 1955, he won photojournalism’s most prestigious award when he was named Magazine Photographer of the Year. Other honors followed, including multiple firsts from NPPA and Gold from World Press Photo, but by the time Grey and I met on assignment in 1961 on the celebrated essay, Lash of Success, and began a working relationship that led to our subsequent marriage, he had largely abstained from competitions to focus entirely on the quality of the images he was producing rather than personal recognition. Unwilling to promote himself, he modestly rejected the idea of organizing his own retrospective only months before his sudden death in 2000. “The work will tell” he told me then, “the work will tell.” Self effacing, quiet, Grey was truly a quintessential photojournalist in the service of truth , and the work still "tells" powerfully. -- Barbara Villet

The New York Times Lens Blog published a wonderful feature on Grey Villet, edited by Stephen Crowley. Barbara Villet is hard at work on a book about her husband; she has become a determined advocate for her husband's tremendous legacy of photojournalism. We are extremely pleased to represent a select collection of vintage prints from her collection, and look forward to sharing more news about this very important photographer with our readers in the near future.

New York in Review - Part One: The Alfred Eisenstaedt Award 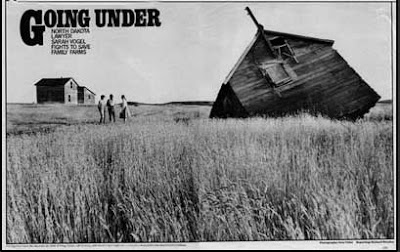 "Going Under," an examination of farm foreclosures in the 1980's, published in Life.