Not the Image I’m usually drawn to…

We would like to share what we found to be a very thoughtful post by Heidi Straube on an aresting image in the current Carl Mydans exhibition.

Not the Image I’m usually drawn to…


Yesterday I went to the Monroe Gallery in Santa Fe, New Mexico. They’re showing a collection of work by Carl Mydans, a photojournalist who worked for the Farm Security Administration in the 1930s, and for Life Magazine during World War II and beyond. The images are all striking….(see some of them here on the Monroe Gallery website.)


The image I was most drawn to is not found on the Monroe Gallery website…I wish it were, because it’s powerful and I’d love for you to see it. 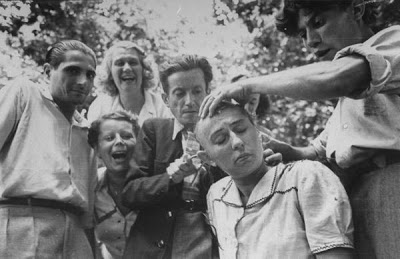 Carl Mydans: A French woman accused of sleeping with Germans during the occupation is shaved by vindictive neighbors in a village near Marseilles, August, 1944

It’s a picture from World War II time period. Taken in France, a woman is sitting in a chair having her hair shaved off by another woman, with other women and a man looking on, the women laughing meanly. Apparently they suspect the woman in the chair to be a German spy, and this is their way of handling it.

It’s not the kind of picture that I’m usually drawn to…but what caught my attention in this image was the man in the picture and his expression. He is looking over at the photographer, and the expression on his face is…guilty? embarrassed? He’s been caught between the enjoyment that can be felt when you’re part of a group, belonging…and knowing that this isn’t really a good thing to do. And you see the connection between him and the photographer as he sees himself in the middle of this.

This is the beauty of Carl Mydan’s work and that of other photographers that I admire. A picture that would be powerful because of its subject matter (although not necessarily unusual, as many events like this have been documented in images), has one more element in it that reflects the complexity of human emotions and actions, the reflection of all of us in life, elevating it to that aspect of fine art that I look for, connect with, and aspire to myself.

In this image, Carl Mydans reminds us that things are not always clean and simple. I see in it a reflection of the challenges we meet often in our lives, of having to makes choices that may be confusing to us and require us to dig deeply to make sure that we’re acting in alignment with our values.

Perhaps the man in the image was only feeling badly for that one instant in time when the picture was shot…and then went right back to the jeering. Even so, Carl Mydans captured an instant of emotional recognition, and it is masterful.

By the way, Carl Mydans died in 2004, and there are only two prints made by him of this image known to exist at this time. All prints in this collection were printed and signed by Mydans. My understanding is that his estate does not appear to be interested in actively continuing to print his work; the negatives are now in selected institutions.

The exhibition, Carl Mydans: The Early Years", continues through November 21.