He shot compelling portraits of the Beatles, Georgia O’Keeffe and many others. He also celebrated photography, and Life magazine, in several books.
Via The New York Times
By Richard Sandomir
May 31, 2020

The longtime Life magazine photographer and photo editor John Loengard, as captured by his Life colleague Alfred Eisenstaedt in an undated photo. In 2005, American Photo magazine ranked Mr. Loengard 80th among the 100 most important people in photography  .Credit...Alfred Eisenstaedt/The LIFE Picture Collection, via Getty Images
When Life magazine sent John Loengard to Miami to photograph the Beatles in February 1964, he had a quirky idea: Pose them in a swimming pool, as a Fab Four of bobbing heads. But on a very chilly day, he could find only an unheated pool.
The Beatles were reluctant to take the dip, but their manager, Brian Epstein, urged them in, citing Life’s importance. “It was very, very cold, and they were turning blue, so after a minute or two we let them get out,” Mr. Loengard told The Guardian in 2005.
The picture caught John, Paul, George and Ringo smiling and singing in the water during their introduction to the United States. To Mr. Loengard, it was his most American picture in 11 years as one of Life’s leading photographers. 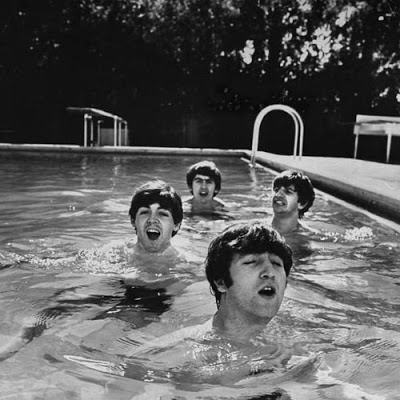 Mr. Loengard considered this 1964 shot of the Beatles (clockwise from back: George Harrison, Ringo Starr, John Lennon and Paul McCartney) his most American picture in 11 years as one of Life’s leading photographers.Credit...John Loengard
Mr. Loengard died on May 24 at his home in Manhattan. He was 85. His daughter Anna Loengard said the cause was heart failure.
From around age 11, when his father got him his first camera, a Kodak Brownie, Mr. Loengard (pronounced LOW-en-guard) understood that there was magic in photography, that images caught inside a box could endure forever.
At Life, where words were subservient to pictures, Mr. Loengard extended that magic and became one of the magazine’s most influential photographers, following in the path of Alfred Eisenstaedt, Margaret Bourke-White and W. Eugene Smith.
Working almost exclusively in black and white, Mr. Loengard photographed stars like Judy Garland and Jayne Mansfield, and heads of state like President John F. Kennedy, walking in Frankfurt with German officials in 1963, and Queen Elizabeth II on a trip to Ethiopia in 1965.
He captured Louis Armstrong spreading balm over his chapped lips. He created a portrait of grief in Myrlie Evers’s comforting of her 9-year-old son, Darrell, at the funeral in 1963 of her husband, the civil rights leader Medgar Evers, who had been murdered. He caught the poet Allen Ginsberg nearly hidden by a veil of cigarette smoke, its wisps seeming to extend from his hair.
In 1966 and 1967, Mr. Loengard went to New Mexico to photograph the modernist painter Georgia O’Keeffe. He did not want to depict her as other photographers had, among them her husband, Alfred Stieglitz, and Yousuf Karsh. He serendipitously found a new way to portray her when she told him about killing rattlesnakes on her property with a stick.

“As we were having lunch, she pulled out from the sideboard boxes of the rattles that she’d collected,” he recalled in “Life Photographers: What They Saw” (1998), a collection of 43 interviews he conducted (and one that someone else conducted of him). “I figured O’Keeffe would like to be known to the readers of Life magazine as a killer. I asked if I might take pictures at the table.

“‘Certainly,’ she said. “I photographed her hand moving the rattles around one of the little boxes, with a wooden match.”

The O’Keeffe photos, some of which appeared in Life, were included in a book, “Georgia O’Keeffe/John Loengard: Paintings and Photographs,” published in 2006.
Publishers Weekly said the side-by-side presentations of Ms. O’Keeffe’s paintings and Mr. Loengard’s photographs afforded “a rich viewing experience that elevates appreciation of both.”
After Life stopped publishing weekly in 1972, Mr. Loengard stayed at its parent company, Time Inc., with its magazine development group; he helped start People magazine in 1974 and served as picture editor for special editions of Life and of a monthly version of Life that began in 1978. He left in 1987 to freelance for various publications, including Life and People, and for corporate reports.
John Borg Loengard was born on Sept. 5, 1934, in Manhattan. His father, Richard, was an engineer and the president of United Chromium; his mother, Margery (Borg) Loengard, was a homemaker.
With his Brownie, young John took pictures of his family and friends and of local landmarks. With his father’s help, he developed his pictures in the bathroom.
“I’ve been hooked ever since,” he told Rfotofolio, a photography website, in 2016.
He took pictures for his high school newspaper. And while attending Harvard University, where he earned a bachelor’s degree in American history, he got his first assignment from Life, to photograph a tanker that had gone aground on Cape Cod.
The pictures never ran, but he got more assignments. He was hired by the magazine in 1961.
At Carnegie Hall that year, he took a dramatic photo of Judy Garland as she bent over to touch the hands of audience members. All eyes were riveted on her, including those of one man who seemed rapturous. It is an emotional picture, but Mr. Loengard said it was not a good one.
“I fudged details and relied only on strong form,” like her back and head and the open mouth of her ecstatic fan, he wrote in “As I See It” (2005), a retrospective of his work. “The camera’s veracity was not needed.” It might as well have been a painting, he added.
After leaving Life, Mr. Loengard became as renowned for his books as for his photography. He wrote about his own work in “Pictures Under Discussion” (1987) and “Moment by Moment” (2016); commented on evocative Life pictures of human expression in “Faces” (1991); paid homage to the photographic process in “Celebrating the Negative” (1994); and compiled his portraits of Annie Leibovitz, Richard Avedon, Henri Cartier-Bresson and other photographers in “Age of Silver: Encounters With Great Photographers” (2011).
When American Photo magazine ranked him 80th among the 100 most important people in photography in 2005, it described him as a “wonderful photographer” who had “turned his intimate knowledge and passion for Life into a remarkable career as a writer.”
In addition to his daughter Anna, Mr. Loengard is survived by another daughter, Jenna Loengard; his son, Charles; three grandchildren; and two step-grandchildren. His marriage to Eleanor Sturgis ended in divorce.
One of Mr. Loengard’s photographic heroes was Mr. Cartier-Bresson, the master of street photography, who had done his best for many years to avoid having anyone photograph him.
When Mr. Loengard asked him to pose for pictures that would accompany a Museum of Modern Art exhibition of his early work, Mr. Cartier-Bresson asked, “Can you take all the pictures from behind?”
No, he said, he could not.
“I felt the most important thing was to nail him down, as quickly as possible — get that face — and then he started taking pictures of me, and he went click-click,” Mr. Loengard said on the PBS show “Charlie Rose” in 2011, “and I had a motor on my camera, so I went ‘zeep-zeep,’ and we sounded like two insects getting interested in each other.
“He thought this was amusing, and he giggled.”