On Ellis Island, Examining Those Who Arrived Before and After 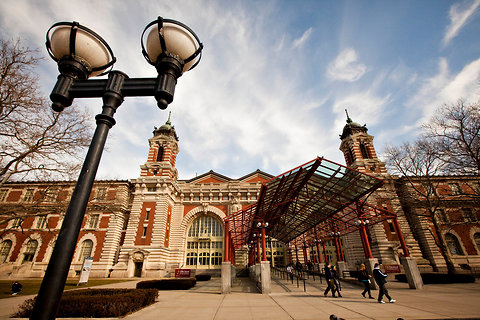 Michael Nagle for The New York Times
The Ellis Island Immigration Museum is expanding its scope to include all immigrants,
not just who arrived on the island.
Officials of Ellis Island estimate that as many as one in three Americans can trace their ancestry to immigrants who landed there from overseas.

Now, the officials are focusing on the other roughly 200 million newcomers who arrived in the United States before Ellis Island opened its doors or after it stopped becoming a portal for immigrants. The national historic site in New York Harbor is halfway through a transformation into a more inclusive National Museum of Immigration.

â€œThe Ellis story is a finite story; American immigration is continuing,â€ said David Luchsinger, the National Park Service superintendent who oversees the island and the Statue of Liberty.
And Stephen A. Briganti, president of the Statue of Liberty-Ellis Island Foundation, said, â€œIf we didnâ€™t tell the current story we would be obsolete in 25 years.â€

As part of a $20 million project privately financed by the foundation, 20,000 square feet, comprised of a former railroad ticket office and offices for Park Service staff, are being converted into a new museum that encompasses the story of immigration from the 16th century through today. The first phase, which covers 1550 to 1892, when Ellis Island began operating as an immigration station, opened informally last fall. The second phase, which focuses on the period after 1924â€”, when strict quotas on foreigners were imposed and the island was used primarily as a detention centerâ€”, and especially on the influx following World War II, is scheduled to open about a year from now with a formal ceremony to celebrate the new museum.