Martin Luther King Jr. at the March on Washington for Jobs and Freedom
Bob Adelman (born 1930)

Via The National Portrait Gallery

 We must forever conduct our struggle on the high plane of dignity and discipline. . . .
Again and again we must rise to the majestic heights of meeting physical force with soul force.


Under the inspired leadership of Martin Luther King Jr. (1929â€“1968), nonviolent protest became the defining feature of the modern civil rights movement in America. A brilliant strategist, King first demonstrated the efficacy of passive resistance in 1955â€“56, while helping to lead the prolonged bus boycott in Montgomery, Alabama, that succeeded in dismantling bus segregation laws. Fresh from the victory that brought him national recognition, the charismatic King cofounded the Southern Christian Leadership Conference and took the lead in directing its civil rights initiatives. In a carefully orchestrated campaign of peaceful protest to expose and defeat racial injustice, King awakened the nationâ€™s conscience and galvanized support for the landmark civil rights legislation of the 1960s. Honored with the Nobel Peace Prize in 1964, he took a public stand against American involvement in the Vietnam War and also became a vocal advocate for those living in poverty. Kingâ€™s words were as powerful as his deeds, and his moving and eloquent addresses, which gave hope to millions, continue to inspire people throughout the world.

Unless otherwise noted, all images are from the National Portrait Gallery, Smithsonian Institution. King proved to be the ideal choice to orchestrate and sustain the Montgomery bus boycott. As a relative newcomer to Montgomery, he was able to bring together all factions of the black community without regard to past rivalries. Through inspirational addresses delivered at mass meetings in Montgomeryâ€™s black churches, King galvanized support for the boycott and clearly articulated the case for nonviolent action, declaring, â€œWe must meet the forces of hate with the power of love; we must meet physical force with soul force.â€ He found a strong ally in fellow Montgomery minister Ralph Abernathy, and during the course of the boycott the two men forged a strong working relationship and a deep friendship. Continuing for an unprecedented 381 days, the bus boycott ended only after the United States Supreme Court ruled bus segregation unconstitutional. When the first integrated bus rolled through Montgomery on December 21, 1956, King and Abernathy sat side by side.  (Via National Portriat Gallery)

As we mark the fiftieth anniversary of the 1963 March on Washington for Jobs and Freedom and Martin Luther King Jr.â€™s iconic â€œI Have a Dreamâ€ speech, I believe it is important to remember King not merely as a dreamer but as a doer. In his thirteen years of public life as an advocate for civil rights, economic opportunity, and world peace, King motivated others not only by communicating his vision for a brighter future but by acting boldly to challenge injustice. Despite enormous odds and the ever-present risk of failure, King led by example, exhibiting courage and character as he maintained his steadfast commitment to nonviolent resistance and direct action. Anyone can dream of a better and more just world. Martin Luther King Jr. dedicated his life to making that dream a reality.

This exhibition has been funded by the Guenther and Siewchin Yong Sommer Endowment Fund and an anonymous donor. 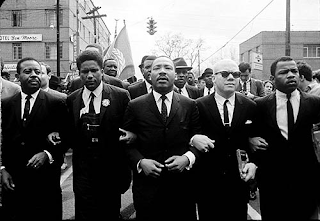