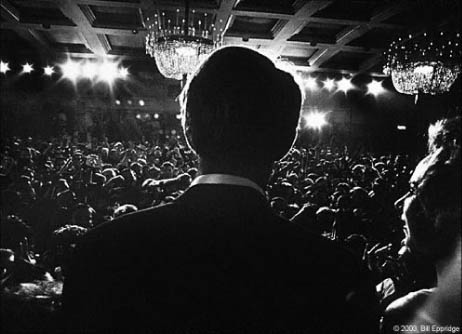 The Westport News
Out of the Woods
Woody Klein

I saw Bobby Kennedy -- again -- last weekend. The stunning collection of vivid black and white photos by famed photographer Bill Eppridge at the Fairfield Museum brought the late Democratic senator back to life for me.


The photos, which I never saw before, were published in Life magazine shortly after Kennedy was shot to death in Los Angeles on June 6, 1968, at the age of 42. It is not an exaggeration to share with you the fact that these moving images reignited mixed feelings about this complex man.

There is no better way to explain my feelings than to repeat here the words of Eppridge on a placard as you enter the museum. Eppridge wrote:

"Over 40 years ago, in 1968, I photographed for LIFE a great tragedy, and a vision of it has stayed with me for all of this time. Our country was going off course with a war overseas, racial inequality and far too much poverty in relation to the amount of wealth that existed. A man emerged to lead us out of this: Robert F. Kennedy. For the short amount of time that he existed on earth he inspired a generation who to this day remember the excitement and hopes that he brought. He died too young, too tragically."

Just after midnight on June 5, 1968, Bobby Kennedy was shot in the kitchen of the Ambassador Hotel in Los Angeles following his victory in the California presidential primary that clinched his Democratic nomination for president. He died 26 hours later.

My thoughts always turn to Bobby Kennedy at this time every year. His death, which will be commemorated on Monday, June 6, became a memorable part of my life as a reporter in October of 1965 when I was working as a TV journalist for WCBS. I managed to get an exclusive interview with him on a visit to what was then called "the worst slum building" in New York City -- 311 East 100th Street.

Kennedy's staff arranged for the interview specifically because of the reputation of this one building which, I pointed out, deserved symbolic attention from a man who had spent the latter part of his political life focusing on the poor. Prior to that time, I had never met him.

He picked me up in his two-door car at WCBS on West 57th Street. He was sitting in the passenger seat up front. I got in the back directly behind him. He greeted me with barely a smile, then turned has head towards me as we made our way up the East Side Drive.

"What's in this for me?" he asked, staring directly at me.

"A story and photo of you showing you care about the poor," I answered directly.

"And what's in this for you?" he continued.

"An exclusive TV story for tonight's news with Bobby Kennedy," I replied.

"Fine," he said in his clipped tone. That seemed to satisfy him.

When we arrived at East 100th Street, we got out of his car and I pointed the building out to him. Before going in, however, he immediately reached for a football inside his car and began to toss it around to some of the Puerto Rican kids on the street. There was a lot of excitement.

Obviously, they knew who he was. When I told him I'd like to interview him, he dropped the football and climbed atop his car, extending his hand for me to follow. I made it up there, microphone in hand while my crew waited patiently nearby.

I turned to him and asked him a question. Before answering, however, he grabbed the mike and pointed it towards his face rather than mine. "This is the way you do it, Woody," he told me, knowing that I had left the New York World Telegram & Sun after a decade and was just starting as an on-air TV reporter.

Momentarily embarrassed, I conducted our interview on the roof of his car for a few minutes. Without warning, he jumped to the ground and told me to follow him up the stairs of the run-down tenement. No sooner had he arrived at the front step when he saw a little boy with the strings to both of his shoes untied. Kennedy got down on one knee and carefully tied bows on each shoe, knowing the cameras were rolling. This guy is a real pro and a showman, I thought to myself. Our interview aired that evening and I got a few "atta-boys" at the WCBS studios.

Segue now, if you will, to a few months later in January 1966. I was playing a new role as press secretary to New York Mayor John V. Lindsay. The Transport Workers Union, led by the fiery Mike Quill, had gone on strike at midnight New Year's Eve. The first weeks were chaotic as New Yorkers tried to find ways to get to work. On January 12, Lindsay called me on our intercom and told me: "Bobby Kennedy's secretary called me and said he may be coming in sometime this afternoon to try and help solve the strike. Let's clear the decks for him."

Less than a half hour later, Kennedy made his way through the swarming press crowd and into the mayor's outer office. I walked in and sat down next to him.

"Hello, Senator, it's good to see you again," I said shaking his hand. After several awkward minutes, I found myself saying something quite personal to him: "I just want to tell you, Senator, in case I never get another opportunity, that I had a great deal of admiration and respect for your brother." He replied, turning to me: "Thank you," in a barely audible voice.

After we had waited for about 10 minutes, Kennedy said, matter-of-factly: `Tell your boss that I am not going to cool my heels out here much longer. Either we go in now or I leave." I quickly got up and delivered that ultimatum to Lindsay, who was sitting behind his desk deliberately, I thought, keeping Kennedy waiting.

When I delivered Kennedy's message Lindsay told me to usher him in. We entered Lindsay's office, Lindsay extended his hand and smiled to Kennedy: "Hello, Bob, it's good to see you again." That was exactly the opposite of how Lindsay felt, I knew, because the media already had speculated that the two politicians would be running for president against each other someday. (Kennedy ran in 1968, Lindsay, as a Democrat, unsuccessfully, in 1972.)

Kennedy spoke first. --"Well, tell me what it is all about, John. How has it been going?"

Lindsay then recited all the reasons why the strike occurred and paced the floor of his office as Kennedy sat motionless, firing questions at him. He told the senator that he thought the strike would last for another day or two.

In fact, there was an agreement with the union the very next day. The ensuing press conference was brief, not especially informative, and cold.

That was the last time I saw or talked with Bobby Kennedy.