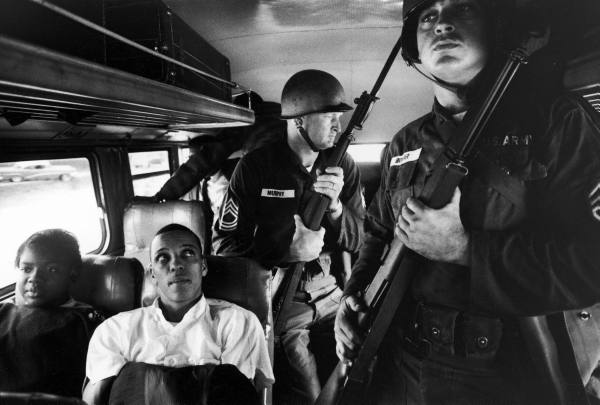 ﻿Paul Schutzer: Freedom Riders Julia Aaron & David Dennis sitting on board interstate bus as they and 25 others are escorted by 2 National Guardsmen holding bayonets, on way from Montgomery, AL to Jackson, MS, May, 1961


With a thriller’s pace and the emotional heft of a battlefield journal, PBS’s remarkable new documentary “Freedom Riders” recounts the bloody anti- segregation bus rides of 1961 that helped kill Jim Crow in the Deep South.

Combining new interviews with the aging riders with harrowing footage of their brave, battered younger selves, “Freedom Riders” brings to vivid life a wrenching moment in American history. Fifty years on and with the movement’s successes long charted, this installment of PBS’s “American Experience” reconstructs those tense weeks with edgy momentum.

In May 1961, civil rights activists, both black and white, boarded several Greyhound and Trailways buses in Washington D.C., en route to New Orleans. At various points, including Birmingham, Alabama, and Jackson, Mississippi, the nonviolent participants would challenge state laws by ignoring signs separating “whites” and “coloreds” at bus-station waiting areas and diners.

Though hardly naive, the riders (and, quickly enough, the nation) were stunned by the savage response. In Anniston, Alabama, a full bus was torched and the riders attacked with baseball bats as they disembarked. Birmingham police, led by the defiantly racist Bull Connor, looked away as the local Ku Klux Klan beat male and female civil-rights activists senseless.

President John Kennedy and his brother, Attorney General Robert Kennedy, consumed and distracted by Cold War politics, were drawn inexorably into the headline-making Southern chaos. Martin Luther King, at first opposed to the dangerous campaign, soon became a symbol of the movement, even as younger activists questioned his relevance.

With a thorough roster of interviewees, writer and director Stanley Nelson weaves together various strands and perspectives into propulsive storytelling. Among the participants: John Patterson, the governor of Alabama who refused a telephone plea for help from the Kennedys, and John Seigenthaler, an administrative assistant to Robert Kennedy sent to quell the violence.

But the story belongs to the riders: Charles Person, a Morehouse College student and youngest member of the first wave of activists; Diane Nash, a student leader in Nashville, Tennessee, who organized replacements when the initial riders were beaten and arrested; and Jim Zwerg, a white student from Wisconsin attacked by Klansmen.

Those three are just a few of the more than 400 people who eventually boarded the nation’s buses that summer in the name of civil rights. Nelson does them all justice.

(Greg Evans is a critic for Muse, the arts and leisure section of Bloomberg News. Opinions expressed are his own.)

To contact the writer on the story: Greg Evans at gregeaevans@yahoo.com