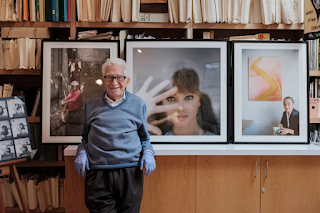 What began as a childhood pastime in Italy turned into a career that took Tony Vaccaro around the world Photo credit  Manolo Salas
Tony Vaccaro took his first picture when he was 10 years old and living in Italy. He soon started toting a camera everywhere — to school, on camping trips, a visit to the Vatican, and eventually to the frontlines of World War II, where, as an American soldier, he documented the Battle of the Bulge, the Liberation of France and the tragic deaths of his comrades.

After that, Vaccaro vowed he would devote himself not to the brutality of war, but to "beauty."

"I said to myself, 'You must photograph those people who give mankind something,'" the 99-year-old photographer, who lives in Long Island City, told The Post. "And I went after them — all of them."

He sure did: Vaccaro has snapped everyone from Jackson Pollock to John F. Kennedy, Jr., Sophia Loren, Lee Krasner, Frank Lloyd Wright — who gave Vaccaro one of his canes, which the shutterbug still uses today — and countless other luminaries, who often became his friends.

Vaccaro turns 100 on Dec. 20, and a new exhibit celebrates his extraordinary life and career. "Tony Vaccaro: The Centennial Exhibition" runs Dec. 13 to 18 at the Monroe Gallery of Photography pop-up at 21 Spring St., Nolita. It features some two dozen images from a deep body of work, from harrowing war photos to whimsical fashion shoots to portraits of celebrities and artists, including Eartha Kitt and Georgia O'Keeffe.

"In the process of doing that, I hope I gave mankind something back," Vaccaro said. 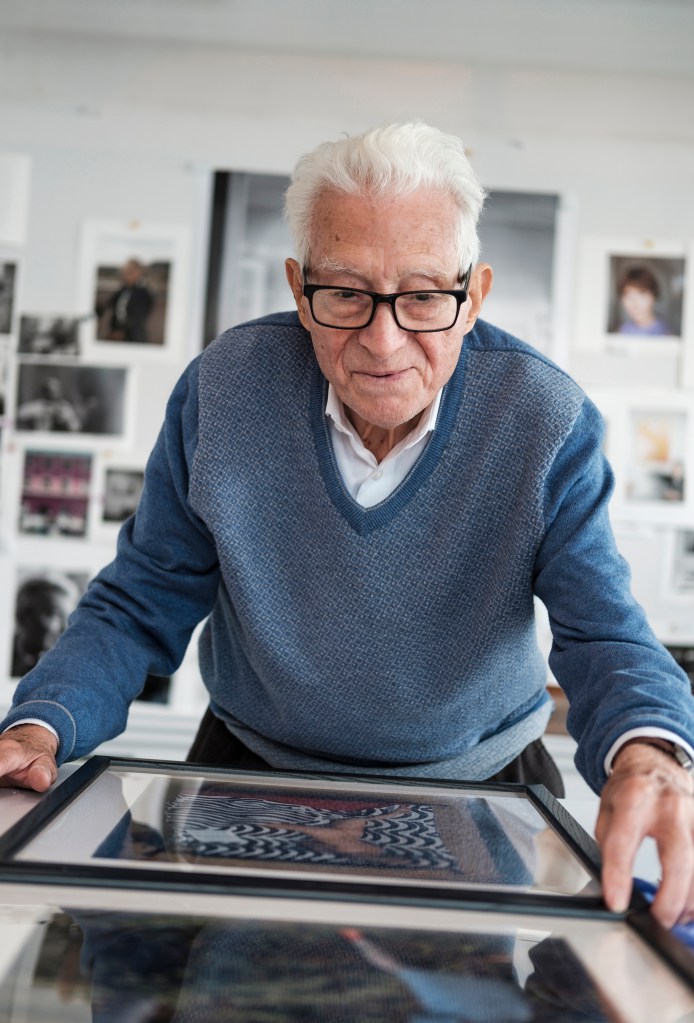 Vaccaro likes to joke that he has survived the Battle of Normandy and two bouts of COVID, but his entire life story is one of remarkable resilience. Born in Greensburg, Penn., on December 20, 1922, he spent his early childhood in Italy after his family had to flee the States under threat of the Mafia. By the age of 5, both of his parents were dead.

"I was raised by my uncle, who physically abused me," Vaccaro said. "But he did give me my father's box camera, and my love for photography was born."

As fascism swept through Italy, a teenaged Vaccaro went back to the States, reuniting with his two sisters in Westchester County. As an immigrant who didn't speak English, carrying his camera, which he used to document his classmates and their adventures, made him feel accepted. 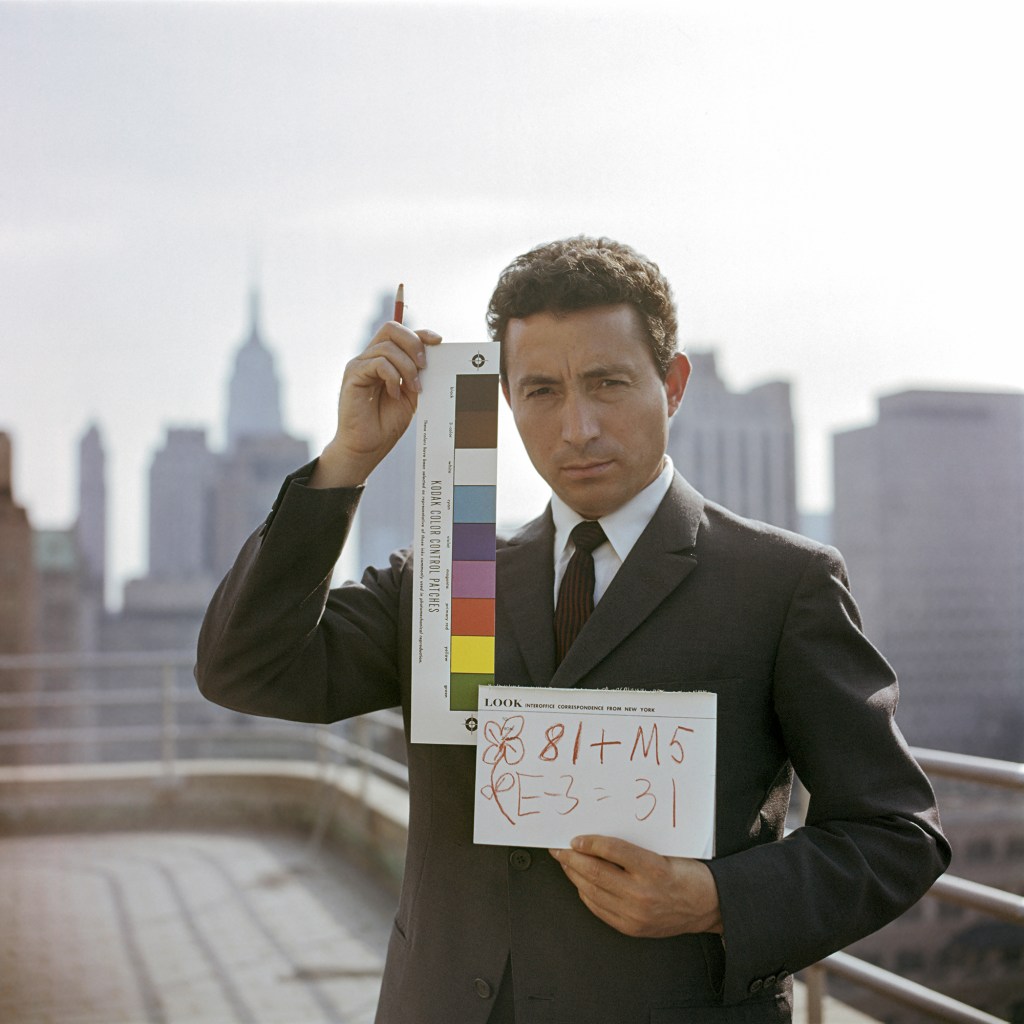 As a young immigrant who didn't speak English, Vaccaro found that his camera helped him feel accepted.  Tony Vaccaro with test strip, NY, 1960
Courtesy Monroe Gallery of Photography
At 21, he was drafted into the US Army. He carried his 35 mm Argus C3, along with his gun, to the frontlines. He used army helmets to develop his film at night and hung the prints on tree branches to dry. He was shot and injured twice and got a purple heart. Afterward, he used his experience shooting on the front lines to bring life and spontaneity to the staid world of fashion shoots, much like Richard Avedon and Gordon Parks.

Vaccaro retired in the 1980s, but he still takes pictures of his 8-year-old twin grandchildren, Luke and Liam (who live in the apartment across the hall from him in Queens), and even photographed the New York City Marathon in November. He also shares an incredible array of vintage snaps on Instagram — @tonyvaccarophotographer — with the help of his daughter-in-law, Maria.

Two weeks ago, he went to the hospital with a burst stomach ulcer, and was still recovering from surgery when he spoke with The Post last week. (His son, Frank, helped Vaccaro form his responses, jogging his memory.)

Still, he has not lost his boundless zest for life. 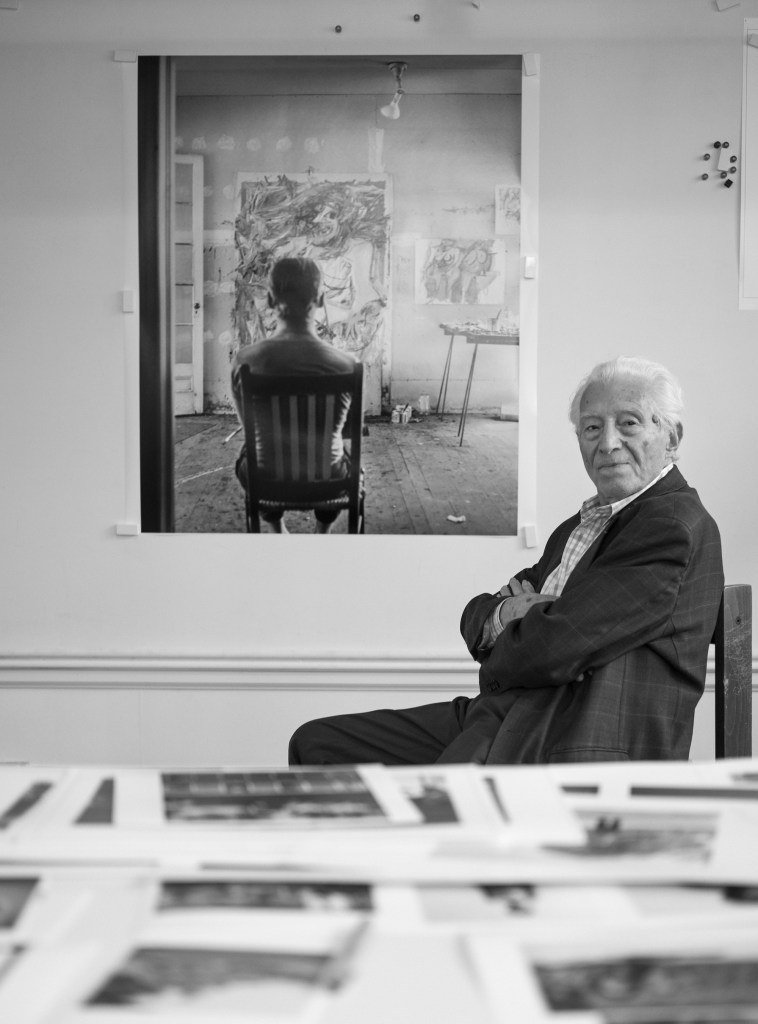 Vaccaro with a photo of Willem de Kooning — the abstract expressionist artist was one of many 20th century boldface names to befriend the photographer over the years.Manolo Salas

"I feel super," he said over the phone from his hospital bed, adding that he credits "chocolate, red wine and determination" for his longevity.

"I have been lucky," he said. "I want the world to know the beauty of life." 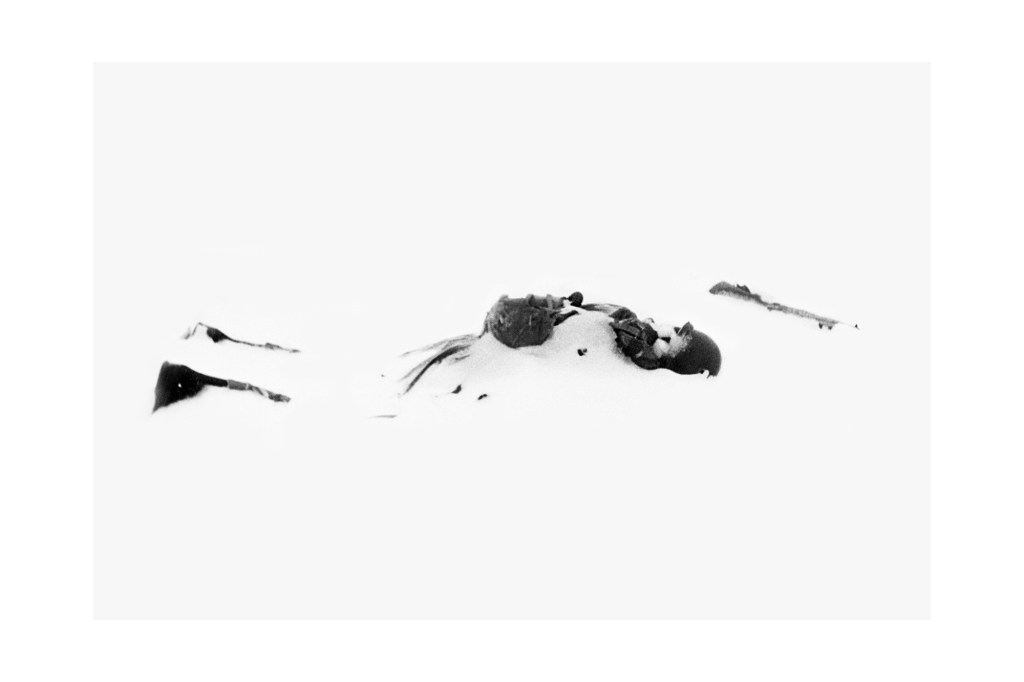 Tony Vaccaro's "White Death"   Tony Vaccaro, courtesy of Monroe Gallery
Vaccaro snapped this stark photo of a fallen soldier lying face down in the snow before he realized the body belonged to his friend, Pvt. Henry Irving Tannenbaum. More than 50 years later, Tannenbaum's son Sam contacted Vaccaro to ask about his father, and the two ended up going to the field where he had been killed. "I was confused to find that the field had transformed into a forest — pine trees everywhere," Vaccaro recalled. "The land owner told us that it wasn't actually a forest, but that the field is used for growing Christmas trees to be sold in Spain. Can you imagine — tannenbaum means Christmas tree in German!" 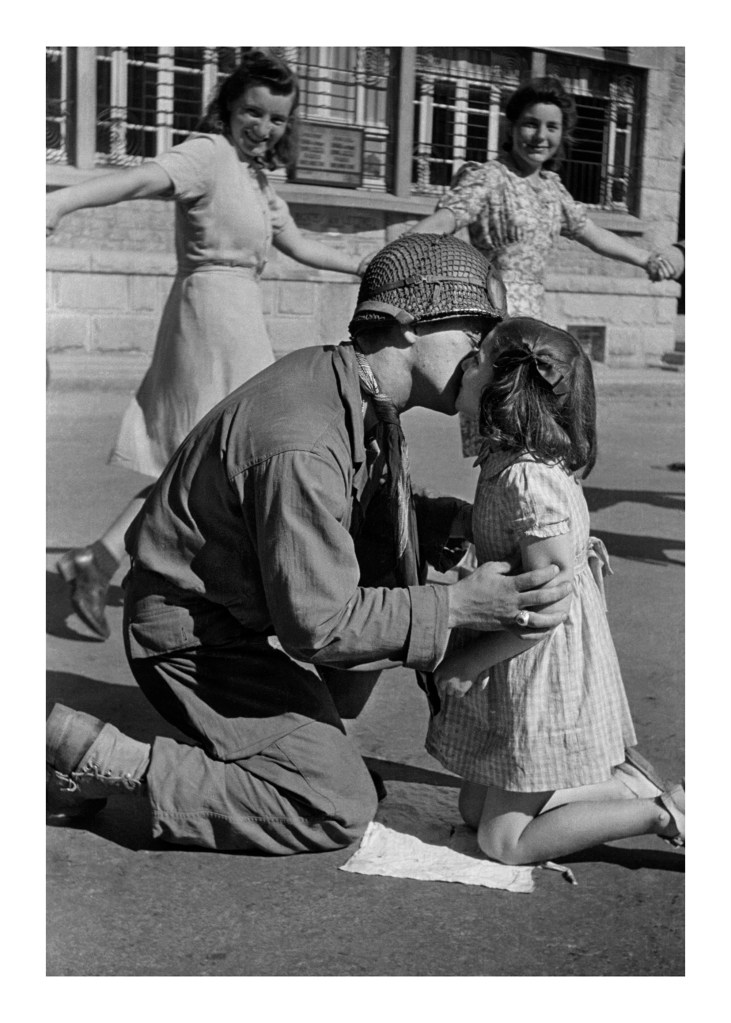 Vaccaro often credits this photo of American soldier Gene Costanzo kissing a small French girl in St. Briac, Brittany at the end of the war as his favorite picture. "The day we liberated this small town in France I will never forget," he wrote in an Instagram post. It was an early summer morning and when news of the liberation broke, women and children flooded the streets. "I was lucky that the French kiss three times [instead of one]. Otherwise I may have missed this warm moment between the soldier and this little girl." 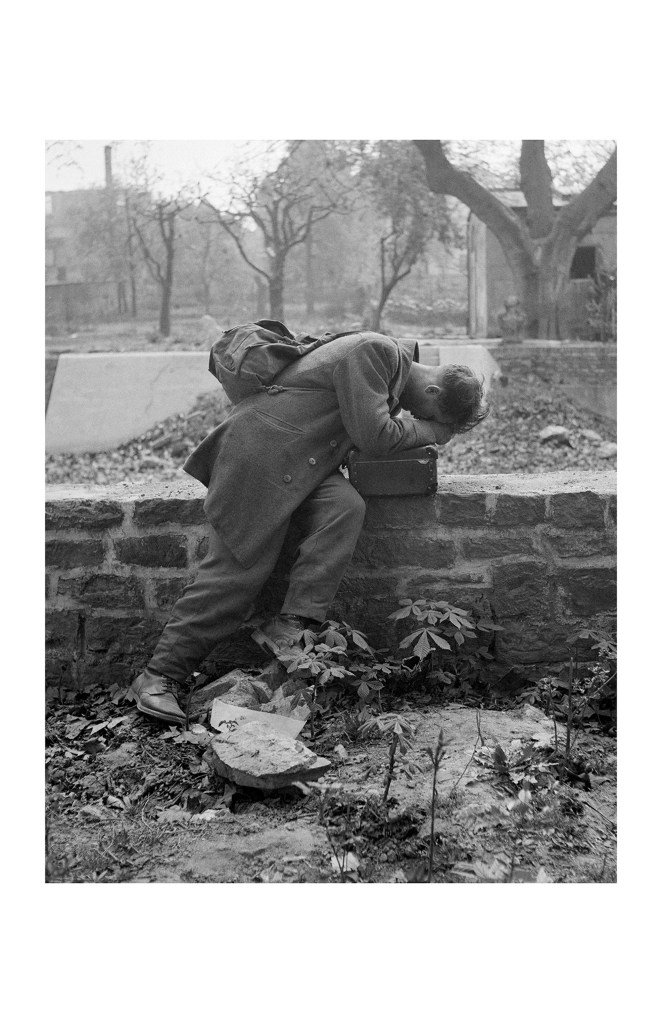 Tony Vaccaro's "Defeated Soldier," 1947.Tony Vaccaro, courtesy of Monroe Gallery
After the war, Stars and Stripes magazine asked Vaccaro to stay in Europe to document the rebuilding of Germany. As he was leaving the US embassy in Frankfurt to pick up his passport, he stumbled upon a German soldier crying outside what was once his home. "He had lost his wife and children," Vaccaro said. "He had apparently been released from a prisoner camp in Texas or Oklahoma." The experience of getting to know the enemy made him realize "we all bleed the same blood." "When we got to know each other we were not much different," he said. 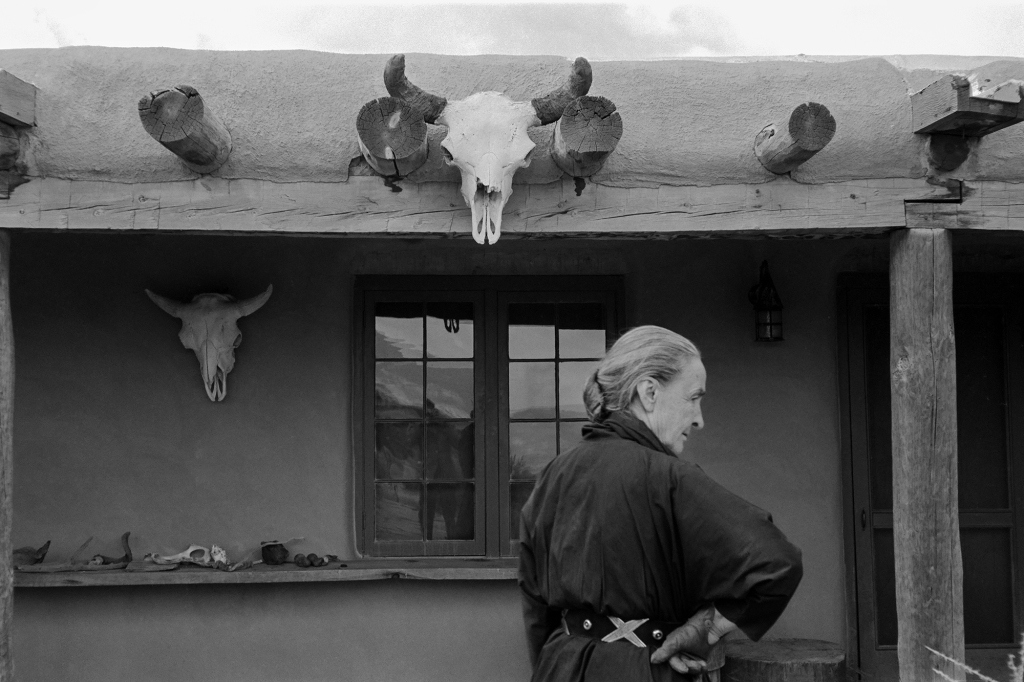 Vaccaro was assigned to photograph then 72-year-old artist O'Keeffe at her home in New Mexico for Look magazine in 1960. But when he arrived, she refused to look at him. "She was expecting a different photographer," Vaccaro said. After five days of ignoring him, she mentioned something about Manolette, considered the greatest bullfighter of all time. "I told her that I had photographed Manolette and that I could send her a photograph," Vaccaro recalled. "So she turned towards me, and for the next two days, never looked, nor talked, to the writer [who had accompanied Vaccaro for the story], Charlotte Willard." Willard left "in a huff," and Vaccaro stayed nearly two weeks, snagging scores of intimate portraits. 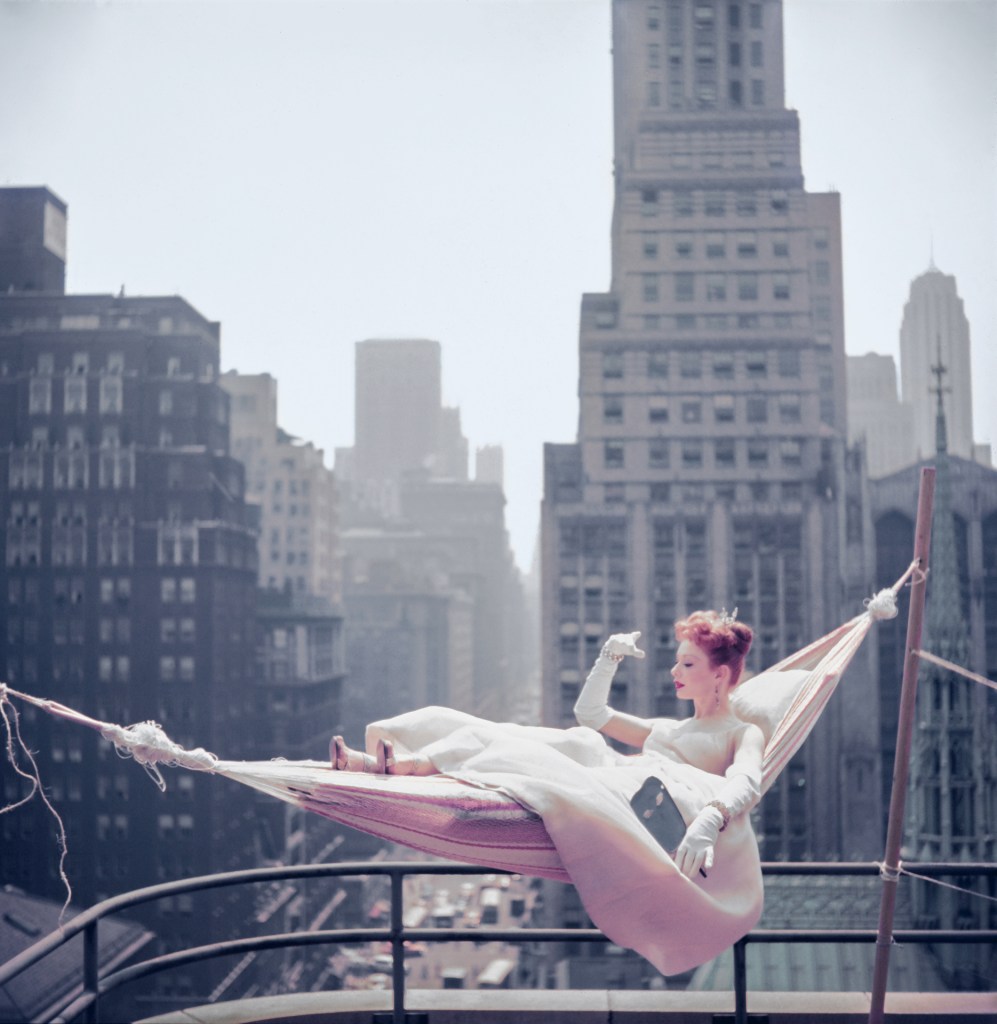 The Tony Award-winning actress, dancer and choreographer Gwen Verdon was one of Vaccaro's favorite fashion subjects. "She was a sensation," he recalled. "She did anything and tried everything." The photographer was shooting Verdon for a quickie fashion shoot and had to improvise something on the outside balcony of the 12th floor of LOOK magazine, so he tied a hammock and instructed Verdon to lounge on it. "I also had a basket of apples at the studio that day, and we ended up rolling them all on the floor of the photoshoot." 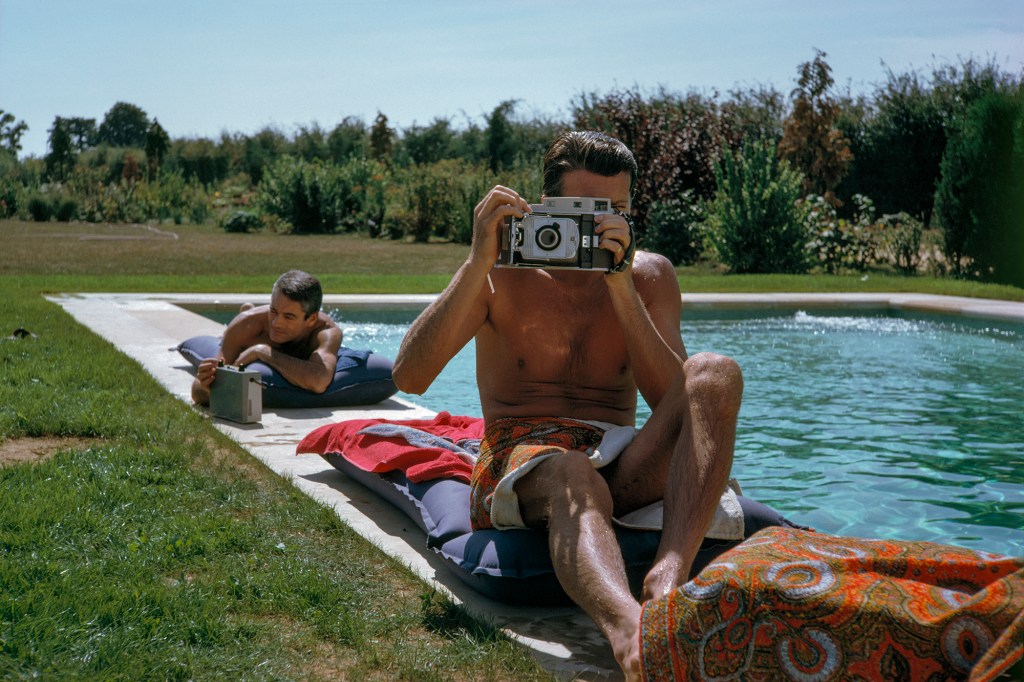 Vaccaro struck up a friendship with the French couturier Hubert de Givenchy after photographing him and his designs for various magazines. After one shoot, Vaccaro joined Givenchy and his partner Philip by their pool and taught the designer how to use a camera, which Vaccaro of course documented with his own point-and-shoot. 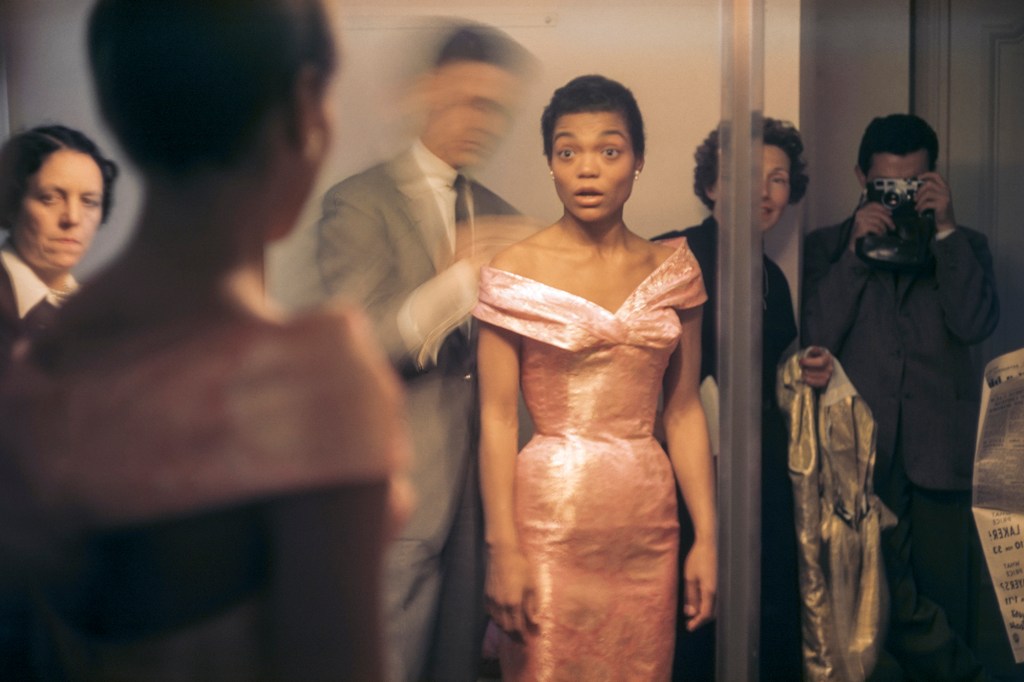 Vaccaro caught the frenzy chaos of a fitting with superstar Eartha Kitt at Givenchy's Paris showroom. To the right, you can spot the shutterbug holding his camera, "just having fun."
The Fashion Train, New York, 1960 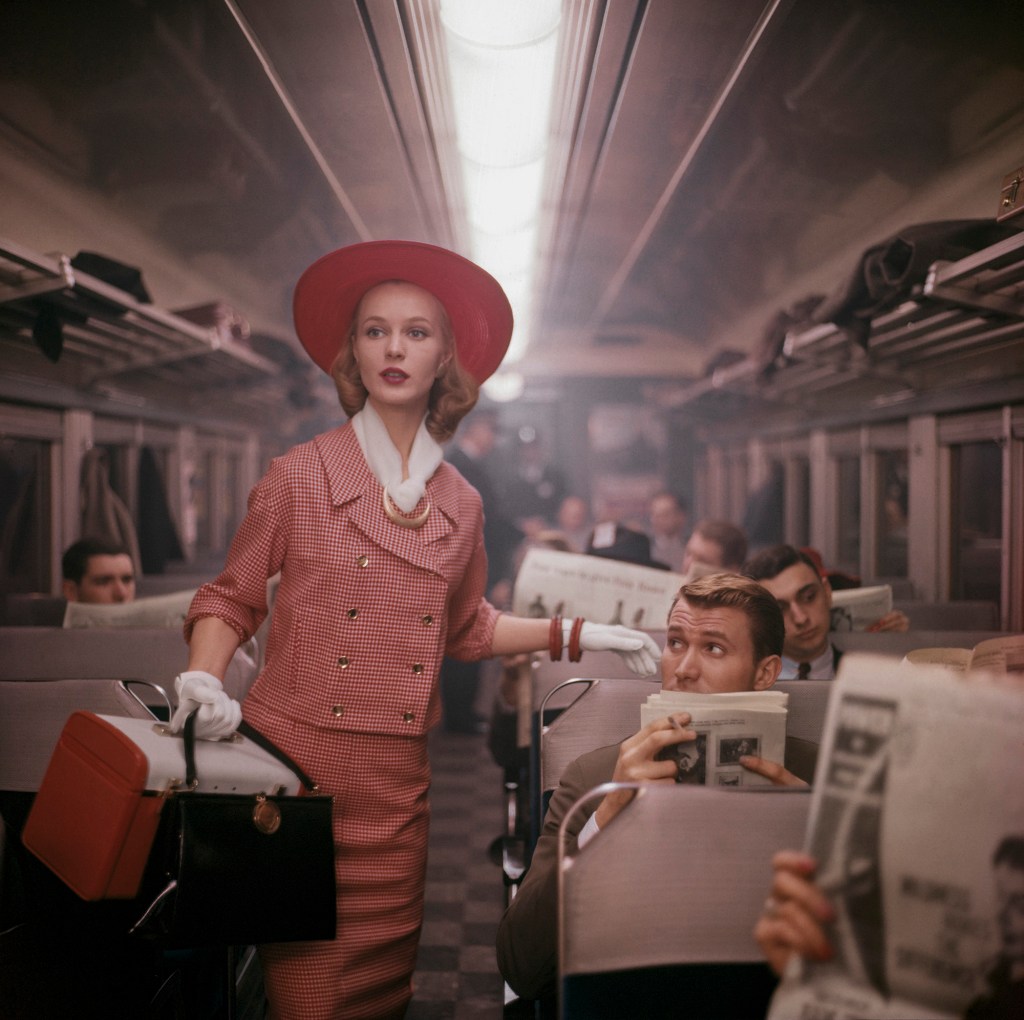 Vaccaro took this picture in 1960 for Good Housekeeping of a fashion model walking through a smoke-filled train. He strove for naturalism in his fashion shoots. "Over time I was able to remove anything artificial - even poses," he said. "I put my subjects in an environment — their favorite environment — and then I took photos." 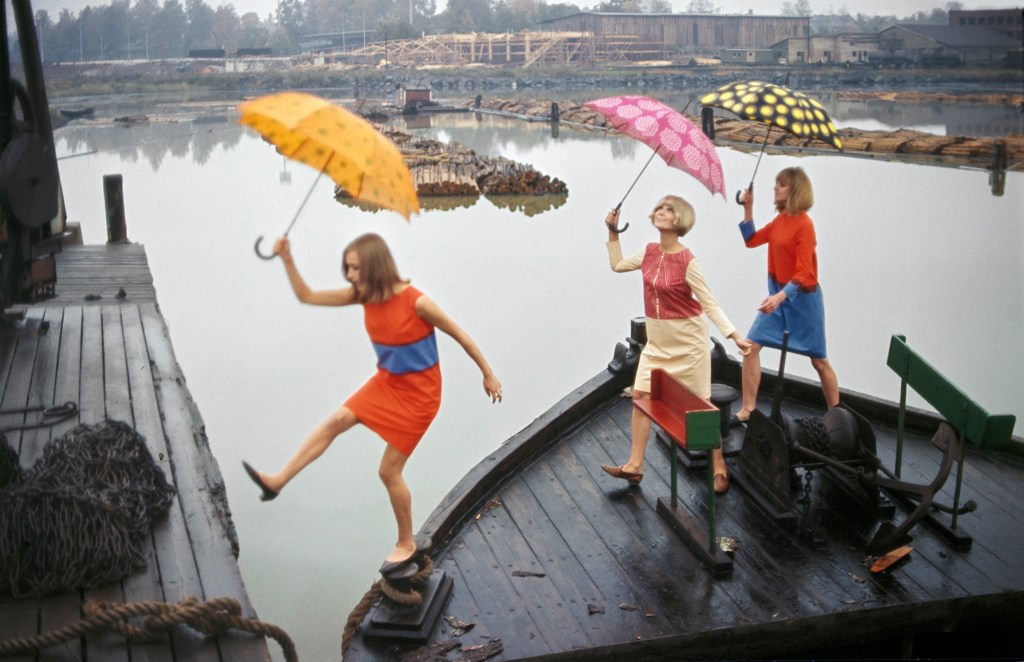 Tony Vaccaro's "Fun in Finland" 1965. The model on the left, Anja Lehto, would later become his wife.Tony Vaccaro  Courtesy Monroe Gallery of Photography

Vaccaro shot many campaigns for the Finnish brand, Marimekko, mainly because he was in love with one of the company's models, Anja Lehto, shown here on the left. "I met her in 1961, when LIFE magazine sent me to 57th Street, between Park and Madison, to photograph [the brand]," he recalled. "Girl number one came in, did her walk, girl number three, girl number four — I looked at her and said, 'That's my wife.'" It took a couple years and photoshoots — Lehto was married to Finnish royalty at the time — but the two got hitched in 1963 and had two children. (She died in 2013.)
38 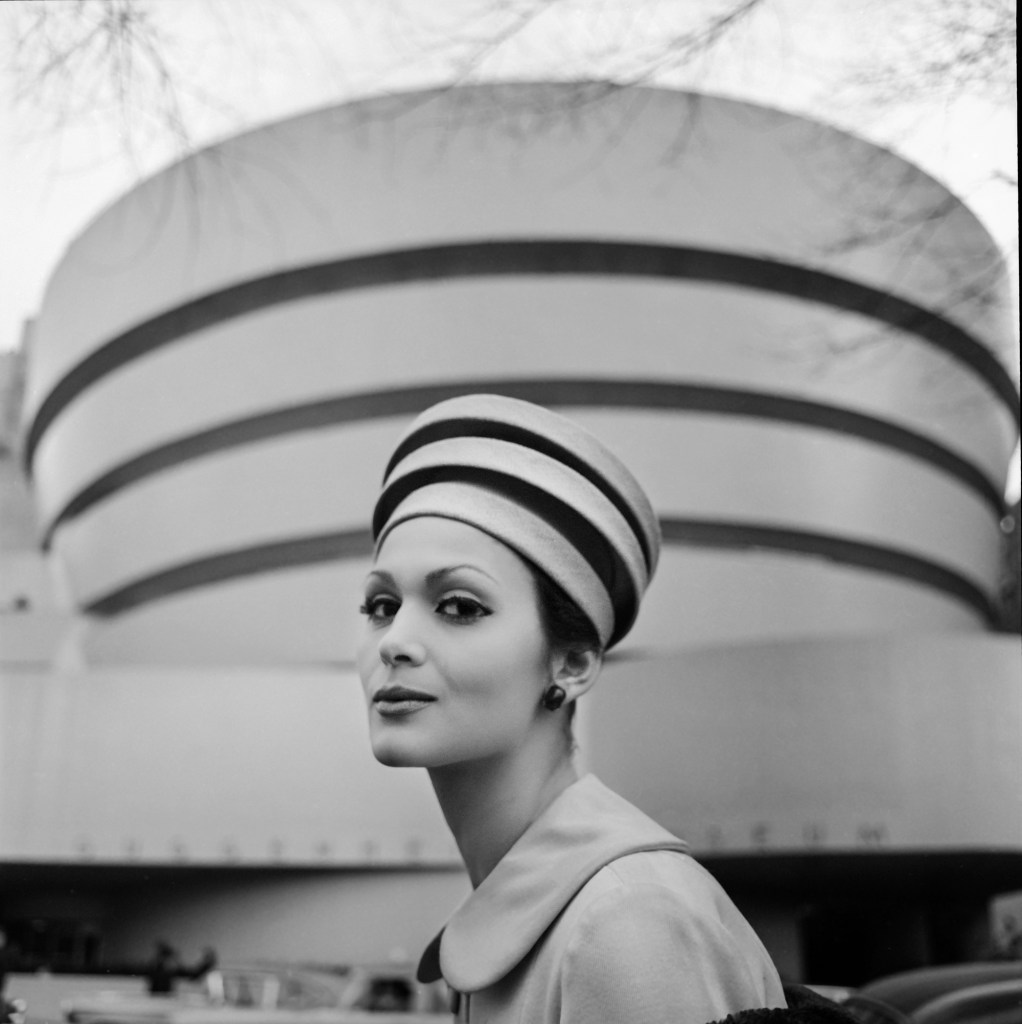 Vaccaro had incredible freedom in his photo shoots, and when LOOK magazine sent him this sculptural hat to shoot for a story, he immediately knew he wanted to photograph the model Isabella wearing it in front of his favorite museum, the Guggenheim in New York City.
Tony Vaccaro The Centennial Exhibition New York Pop Up December 13-18, 2022
21 Spring Street, NY
Tony Vaccaro The Centennial Exhibition Santa Fe ongoing through January 15, 2023
112 Don Gaspar Avenue, Santa Fe, NM