Photographing the Great Depression, then and now 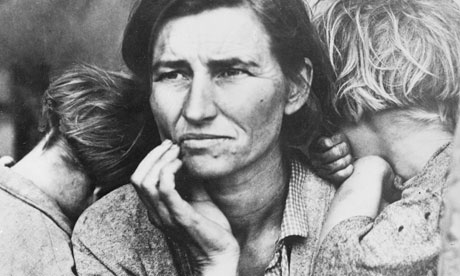 Friday 16 September 2011 09.00 EDT
Via the Guardian
Faces from the Great Crash of 1929 and its aftermath are haunting the 21st century. Wall Street brokers fleeing the trading floor in panic, or putting their cars on sale because they are suddenly broke, appear in old black-and-white photographs beside analyses of the current state of the markets composed by sombre authorities. Not only the collapse of confidence that shattered investors 82 years ago but the long years of misery that followed now seem to call out to us, to warn us, to show us a truth that is urgent and immediate. Can this really be so? Can that nightmare history be repeating itself?
This week an American paper, the Los Angeles Times, republished one of the most renowned of all depression photographs. Dorothea Lange was working in 1936 for an American government agency called the Resettlement Administration, documenting the journeys of desperate farm labourers in search of work. In Nipomo, California she met Florence Owens Thompson and her children. Lange's picture of the road-weary family has endured because it is an intimate human portrait, that cuts through statistics and abstractions to show us real life in the Depression. The weather-beaten, stoical, dignified face of Thompson, her children burying themselves in her for protection, speaks of poverty that is not destined, or deserved, or inevitable, of people whose suffering is random, cruel and, surely, preventable.
Out of the Great Depression in 1930s America and Europe came a broad acceptance that society needed to do better, that markets could not guarantee universal wealth or even survival by themselves, that governments needed to do two things as a matter or course: manage the economy, and ensure the welfare of citizens. At least the western democracies reached this consensus by 1945, after 16 years of chaos, during which far more dangerous alternatives to capitalism took the world by storm. Lange's photograph was shocking in 1936 because it revealed that extreme poverty now existed on a frightening scale in the United States, the country where wealth was freest, industry most advanced, whose business was business. If capitalism was failing in America, did that mean it was finished?

In 1936, when this picture was taken, many believed Karl Marx right in his prediction that capitalism would be broken by its contradictions. They looked admiringly to Russia or even joined communist parties. Meanwhile, Hitler's Germany blamed the troubles on Jewish financiers and created work through massive public schemes. Liberal, capitalist democracy would only regain strength with the new consensus for welfare and planning that emerged from the second world war.

The face of Florence Owens Thompson in Lange's photograph is hemmed in by shadows of this dark period in history. So why did she make her appearance on the LA Times the other day, on the breakfast tables of film producers and television executives? The article was asking why today's artists have not risen to the challenge of depicting what it claimed is already a new depression â€“ where is our Dorothea Lange? Yet the real question seems to be why we suddenly find images of the 1930s pertinent and recognisable and â€¦ contemporary.

The stark images of the 1929 crash and the 1930s depression that currently haunt us are forebodings, night terrors, nervous jitters. They express something essential about the state of the world in 2011: fear.

Nothing is scarier than the thought that we might be repeating the history of the 1930s. There is no more terrifying period in human history. The economic travails of that time tore apart societies. Americans suffered catastrophic poverty, as shown in Lange's photograph. Germans succumbed to the politics of hate, Spain became a battleground, soon Europe would be one. All that is evoked in chilling photographs of the depression era.

This is a moment of sweat and nerves. Over the summer, financial news got eerie. As it happens, the nightmare scenarios have not yet come to pass â€“ some were predicting a collapse of the euro in August. The threat of Washington failing to raise the American debt ceiling was another panic averted at the last moment. But the fears continue.

Fear is a historical force. At the beginning of the French Revolution in 1789 peasants were driven to violence by a "great fear", a panic that swept the countryside. It was, of course, during the Great Depression that president Franklin D Roosevelt made his famous speech denouncing the irrationality of fear. He used his inaugural address in 1933 to urge "that the only thing we have to fear is fear itself â€“ nameless, unreasoning, unjustified terror which paralyses needed efforts to convert retreat into advance".
Here is something truly eerie â€“ the thing we have in common with the people of the Great Depression is a mood of deepening fear, "nameless, unreasoning â€¦"

In America in 1933, Roosevelt faced down fear and insisted that rational measures could defy the forces of destruction. Meanwhile, that same year Hitler took power with a politics of pure unreason that feasted on terror.

Today it is avowedly democratic politicians who seem ready to exacerbate terror. Deficits are talked up as ghoulish menaces, social ills blamed on moral decay. In America, government itself, as any kind of rational agent for reform, is widely portrayed as a monster.

When Lange took her photograph, times were terrible. But there were powerful voices of optimism and rationality, from Roosevelt to John Maynard Keynes, and these voices would win through in the end. In 2011 American politics seems headed in the opposite direction to the forward-looking road it took in the 1930s, while everywhere primitive gloom is in the ascendant. In this sense the situation does not resemble the 1930s. It is potentially far worse.