Iconic symbols of the New York skyline, the World Trade Center gleamed like golden towers in the sunset, then smoked and fell with the devastation of 9/11.

Such was the cycle of life for what had been once the tallest buildings in the world.

Santa Fe’s Monroe Gallery of Photography is commemorating the 20th anniversary of that fateful day with “9/11 In Remembrance,” an exhibit of more than 20 images. The photographs document the design and building of the World Trade Center, its reign over the city skyline and its fall on that crisp September day.

World War II and lifestyle photographer Tony Vaccaro captured the towers during a 1979 sunset, as well as their architect, Minoru Yamasaki, in 1969.

Yamasaki’s preference for “aesthetic thinness” surfaced in the narrow spacing of the buildings’ windows and the vertical patterning created by aluminum alloy sheathing. When construction ended in 1976, it garnered scant praise, but the skyscrapers became symbolic of the Manhattan skyline.

When terrorists struck 25 years later, freelance photographer Eric O’Connell had just moved to New York from San Francisco. He saw the burning towers, heard a rumble and grabbed his cameras and ran toward the flames. He got to the St. Nicholas Greek Orthodox Church as everything exploded around him. When the pounding stopped, he didn’t know if he was dead or alive.

O’Connell’s print shows both the towers and the church being swallowed by smoke and flames.

“He heard people yelling, ‘It’s coming down!’ and he dove into a lobby,” gallery co-owner Michelle Monroe said. “He couldn’t tell what was inside and what was outside. It looks like a horror movie.”

O’Connell also captured the chaos and confusion of people engulfed in ash and dust in “The group in dust, West Street, September 11, 2001.”

“There were 8 million faces that looked like that for weeks afterward,” Sidney said. 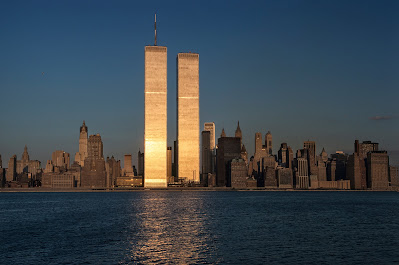 Twin Towers in sunset, New York,” by Tony Vaccaro, 1979.
“They shut down all the traffic in Manhattan,” Michelle Monroe added. “They designated streets as one-way for emergency responders. New Yorkers would line the streets as the shifts changed.”

The crowd applauded, waved signs of support and gave out water bottles and flowers, echoing the pandemic’s spontaneous salutes to first responders. Black bunting draped every firehouse, honoring the firefighters who died.

“Every firehouse was a shrine,” Sidney Monroe said.

New Mexico’s Eric Draper photographed President George W. Bush on the phone in a Florida classroom when he learned of the attack. Draper was the president’s personal photographer. 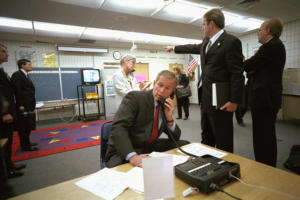 “He was reading books to a kindergarten class,” Sidney Monroe said. “They set up an office in one of the school rooms, then they whisked him out on Air Force One and flew around until they figured out what was going on.”

In their own words
As former New Yorkers, 20 years later Sidney and Michelle Monroe still struggle with the anniversary of Sept. 11, 2001.

Their gallery stood nine blocks north of what became Ground Zero. The National Guard cut off the neighborhood, closing their business. Their daughter was 9 years old.

“Our daughter was in school,” Sidney Monroe said. “They had a recess period before the school started. They saw the plane flying over their playground.”

“Our daughter will never, never be the same,” Michelle Monroe said.

The fires were still burning when the gallery reopened.

“You’d look out the window and there would be ash falling,” Sidney Monroe said. “It was surreal.”

The couple decided to move to Santa Fe because of its status as either the second or third most active art market in the country, depending on the source.

“It’s a dreadful, dreadful anniversary, but there were so many people who ran into the mouth of hell,” Michelle Monroe said. “We don’t do anything that day. We just say, ‘Let’s get it over with.’ I don’t think anyone stopped crying for a couple of weeks.” 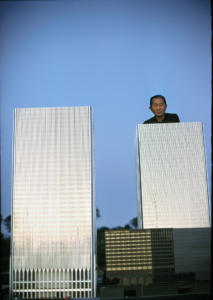