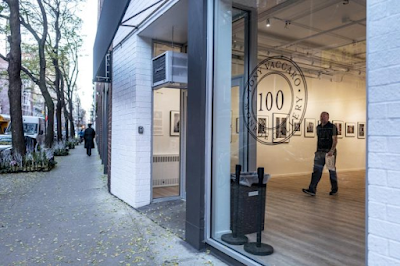 T
Tony Vaccaro: the centennial exhibit
Around the corner, on Spring Street, there was the pop-up show of the Monroe Gallery dedicated to Tony Vaccaro: the exhibition in the temporary room with large windows has just ended, but the same exhibition continues until February 5 in Santa Fe.
Michelantonio Celestino Onofrio Vaccaro was born in Greensburg, Pennsylvania, on December 20, 1922, to Italian immigrant parents. His father Giuseppe Antonio Vaccaro (born October 14, 1874) was from Bonefro, Molise. In 1926, during the family's move to Italy, both parents died. With the outbreak of World War II, Vaccaro returned to the United States to avoid military service in Italy, but then fought in Normandy, Belgium, Luxembourg and Germany. Until 1949, Vaccaro photographed throughout Germany and Europe, documenting post-war life. After returning to the United States in 1949, he worked for Flair and Look before joining Life magazine. Between 1950 and 1973 Vaccaro worked extensively as a fashion photographer. Settled in the West Village in 1951 and then in Central Park West in 1955, since 1979 he has been in Long Island City both as a residence and for his studio, with his archive of hundreds of thousands of images. We had met him a few months ago at the AIPAD photo fair where, always with the gallery owners Sidney and Michelle Monroe and surrounded by his grandchildren and son, he welcomed visitors toasting with a glass of red.
Full article here