REVIEW: " For anyone interested in the history of this mixed bag of a nation, "American Edge" the museum-quality Steve Schapiro photography exhibition at Monroe Gallery is not to be missed."

HISTORY THROUGH THE LENS


By Malin Wilson-Powell
For the Journal

For anyone interested in the history of this mixed bag of a nation, "American Edge" the museum-quality Steve Schapiro photography exhibition at Monroe Gallery through June 27 is not to be missed. The majority of 57 potent black-and-white images are from the tumultuous '60s, the beginning decade of Schapiro's lifetime in photojournalism. Born in New York City in 1944, Schapiro shot his earliest self-initiated documentary essays "Narcotics Addiction in East Harlem" and "Arkansas Migrant Workers" in 1960.

These independent projects brought him assignments from the big picture magazines of the day, including LIFE, Look and Rolling Stone. Schapiro was one of those meddling northerners who went south in 1965 to join the Selma to Montgomery marchers who were seeking the right to register to vote. The photographer heeded local advice to cut his hair and not to wear his leather jacket. Over the five days it took to complete the 54-mile march, the crowd grew from 4,000 to more than 25,000. Armed with his handheld 35 mm camera, Schapiro found the courage in those he documented (and in himself) to join a campaign that was met with overwhelming violence and that resulted in the deaths of two men — the Rev. James Reeb, a white pastor who was beaten to death, and Jimmy Lee Jackson, a black activist who was shot by a police officer.

While there are many differences that divide America's epochal 1960s from today, the similarities are deep enough to lay claim to the current American moment, where "edges" seem to have proliferated and feel ever more vertiginous. Although the '60s was an era when Barack Obama's election to president was an impossible dream, it was a time when many Americans believed they were making inevitable progress toward equality. A "post-racial" society with the end of racism and xenophobia seemed to be in site. More than 40 years later, tolerance seems the impossible dream. Despite our being globalized and electronically linked now, Schapiro's 1964 image of follow-the-leader white men in Florida carrying their "Segregation Forever" sign resonates with up-to-the minute virulence of anti-immigration hysteria, as well as the incendiary and rampant hate speech against our black president.

This exhibition appropriates the title of Schapiro's first and very deluxe monograph published in 2000 by Arena Editions (a now defunct press founded in Santa Fe). More than half of the silver prints in the gallery were first published as art in this book, including the two iconic images chosen for the end papers. On view (and used as the book's front end papers) is the ominous "Robert Kennedy in Berkeley, Calif., 1966," with Kennedy's dark silhouette looming over a sea of faces turned toward him and the sunshine. It is a prescient image of Kennedy's assassination two years later, when his demise left a huge black hole in the American political landscape and psyche. 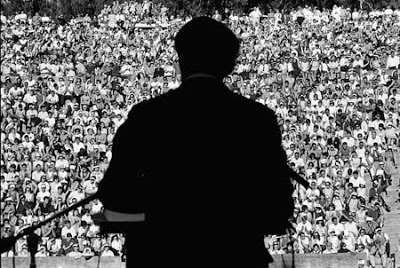 Robert Kennedy at Berkeley, California, 1966
Also on view (and used as the book's back end papers) is the achingly resonant "Jerome Smith, Mississippi, 1965." No one could ask for a more perfect composition. Smith, a young Civil Rights worker in overalls, is framed in profile by his church doorway in the "thinker's pose," precisely echoing the pose of a pondering Christ in the Garden of Gethsemane as depicted in the church's stained glass window.

Schapiro has always acknowledged his debt to the renowned W. Eugene Smith, the photographer he tried to emulate, as he did Henri Cartier-Bresson. His monograph is dedicated simply to "Smith." Yet, for all his predecessors' greatness, Schapiro's work is not as sentimental as Smith's or as distant as Cartier-Bresson's. Schapiro's work is more self-conscious and feels more embedded in his generation's disorienting times. In light of earlier photojournalists, the tone of Schapiro's work is closer to WPA-era Dorothea Lange and Hungarian-born André Kertész. 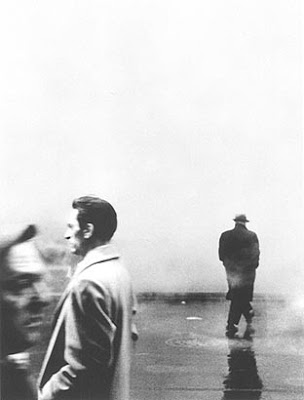 In addition to multiple images of Martin Luther King and Robert F. Kennedy, Schapiro captured many anonymous players who had their moment on the stage of the '60s, such as a bloody student at the Columbia University riots, lonely supermarket parking lot picketers, stoned flower children in Haight Ashbury, and frenzied go-go dancers. These unnamed actors are shot with the same involvement as his celebrity images, including Warhol's factory, the Kennedys' Camelot, James Baldwin, Rosa Parks, Janis Joplin, Ike and Tina Turner, Alan Ginsberg, and Samuel Becket. After popular magazine assignments started to wane, Schapiro began working for both the music and movie industries shooting Hollywood stars on the set, and his celebrity images retain the on-the-road grit of his photo journal essays. 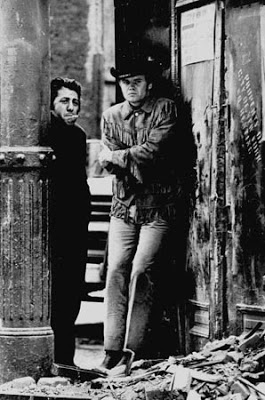 Midnight Cowboy, New York,1969
Schapiro photographs are black-and-white silver prints (in limited editions of 25) and the magical emergence of images from negatives with wet chemicals darkroom, before transition to the now-dominant flat-screen digital technology. The tremendous power of his work reminded me of a very recent symposium (April 22) organized by the San Francisco Museum of Modern Art. Thirteen leading American artists, curators and critics were invited to address the rather silly question "Is Photography Over," a variation on the old straw dog "Is Painting Dead?" Of course, this is an ever-ready topic raised by institutions and academics that need issues to discuss. But, just as with every other medium an artist chooses to use, yes, the medium is dead. Every medium is dead. It becomes art precisely when the artist breathes new life into it. Fortunately, for those of us who like looking at art, the medium is a tool of the artist and not a ghetto.

Also, if you like Steven Schapiro's photographs, keep your eyes open for the traveling exhibition "The High Road to Freedom: Photographs from the Civil Rights Movement, 1956-1968," organized by the High Museum of Art in 2008. Currently on view at the Bronx Museum of Art in New York City, review here.) The exhibition prominently features Schapiro's images documenting the legal end to American apartheid and it is currently "on the road," and, hopefully, like America, a work still in progress.