Review: The Long Road: From Selma To Ferguson

â€œThere is no scientific or anthropological basis for race.â€
â€“Maya Angelou 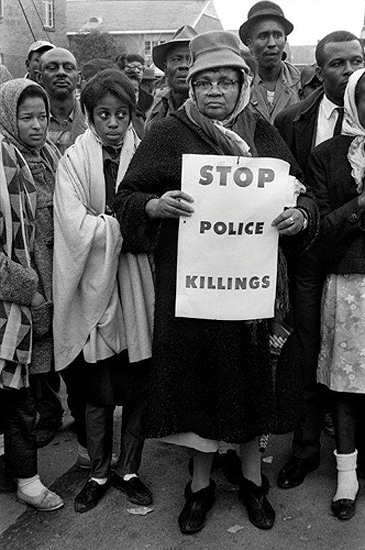 Steve Schapiro: "Stop Police Killings", Selma March, 1965
The is only one race: human. Being a bigot based on any other concept of so-called â€œraceâ€ is similar to being a climate change denier. Both are premised on what could be called belief-desires on the part of the willfully ignorant, rather than on any sort of scientifically, empirically, or reality based truth.
The Long Road: From Selma to Fergusonâ€”an elegant exhibition of fifty-five photographs documenting the faces and places of Americaâ€™s Civil Rights era alongside todayâ€™s rising BLACK LIVES MATTER movement is a timely contribution to the local cultural scene by the Monroe Gallery. The curation of the prints is thoughtful, and rich in response to the face-toÂ­face with the ethnically biased police brutality that is confronting the nation. Whitney Curtisâ€™ image of a twenty-three-year-old African-American activist backing away from three heavily armored St. Louis County cops with large weapons drawn, makes an iconic, Leon GolubÂ­like, presentation of the point. A 1961 LIFE magazine image by Paul Schutzer of Freedom Riders on an interstate bus escorted by National Guardsmen with rifles and bayonets carries the tension of violent possibility held at bay, and echoes of the future found in the sign of one protester on the 1965 Selma March preserved by legendary LIFE photographer Steve Schapiro, that reads simply â€œStop Police Killings.â€
Relevant today, because the domestic terrorism of African-Americans hasnâ€™t ceased since they were forcibly enslaved and brought in chains to this continent by Euro-American colonizers. A uniquely American ethnic hate and systematized terrorism campaign has been carried out ever since. For centuries now, law enforcement, judges, the Klu Klux Klan, skinheads, and Nazi-wannabes have conducted a long brutal pogrom of slavery, lynchings, scape-goating, church burnings, and institutionalized hatred against African-Americans. This was tragically capped most recently by the nine murders of Reverend Clementa C. Pinckney and eight parishioners at the African Methodist Episcopal Church in Charleston, South Carolina by a twenty-one-year-old white supremacist espousing the belief-desires of a â€œblack and white racesâ€ ideology of â€œracial hierarchyâ€ woven into a hate and anger fueled action based on nothing but differences in skin tones. Children, when your ideology drives you to kill, the first thing to kill is your ideology.

The point of color in painting or people is visual pleasure and UV protection. The late, satirical Klan paintings of Phillip Guston are more relevant than ever today. Women of the Klan Bow Their Heads in Prayer, taken in South Carolina by Charles Moore and Segregationists, (again by Steve Schapiro) from a 1964 gathering in St. Augustine, Florida have a similar sense of the bleak stupidity of bigots on the wrong side of history. The exhibition does a great job of branching out to include images connecting the Selma March with anti-war, gay rights, labor, and feminist actions, making it clear that the crux of the matter is not the distraction of an erroneous race concept, but rather the still unattained dream of a reality based upon the self-evident and scientific truth that all people are created equally and are endowed with certain inalienable human rights and liberties that they must not be denied. Images of Reverend Martin Luther King Jr. and his courageous entourage figure prominently. Pinckney joins him, now. Photographer Bill Eppridgeâ€™s moving image of activist James Chaneyâ€™s mother and younger brother at Chaneyâ€™s funeral is a study of dignity in grief that hits a universal human note far beyond any individual ancestry.
As King knew, no people holds a monopoly on evil or good. There are no fine hierarchical lines to be drawn between races because there is no place to draw them. Our homeland is the planet. We are all relatives in one species, and our major differences across ethnicities are simply cultural. Ancient tribalism is real, for sure, in fanaticsâ€™ belief-desire systems, but is based on nothing actual. Worldwide, it is supported most evilly by cultural ideologues and used in contemporary times, along with poverty and terrorism by a multi-ethnic cabal of nationalists and other politicians in collusion with banksters and financiers to divide and conquer various populations, and to enforce strict differences in access to wealth, resources, and territory. Economic differences (and growing disparity) are what theyâ€™re trying to hide.
Itâ€™s as ugly a situation as the eight shots to the back at short range that an unarmed Walter Scott took as he fled a now-indicted police officer, or the scenes of the crazed cracker cop in McKinney, Texas tackling an unarmed fourteen-year-old African-American girl to the ground at a pool party, and pointing his gun at her unarmed friends. Or Mike Brownâ€™s body lying dead on the ground in the middle of the street for hours, or Freddie Grayâ€™s severed spine. Nina Bermanâ€™s chilling Will I Be Next glimpses a black-haired boy looking out of the doorway next to the title text on a placard placed at the site of the Eric Garner strangulation in 2014. Itâ€™s a good question, unfortunately. â€”Jon Carver