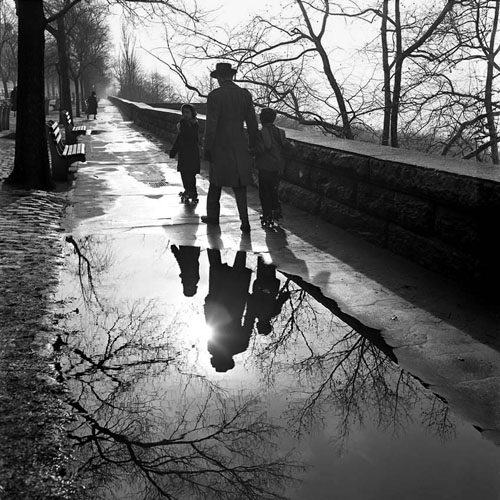 Itâ€™s not likely that Vivian Maier ever read pragmatist philosopher John Deweyâ€™s classic 1934 text on art and aesthetics. It is certain that John Dewey never saw a photograph by Maier, whose work was virtually unknown until 2007. Yet the street photography of Vivian Maier could be a contemporary case study for Deweyâ€™s grounding of artâ€™s genesis in ordinary experience.

Deweyâ€™s Art as Experience is slow going, weighed down after seven decades by its now-archaic style and language. Well worth the read, though: Its lasting contribution to discourse about art are Deweyâ€™s fundamental insights about the nature of experience and the location of the art object within culture rooted inoncrete experience. Heâ€™s at his bestâ€”and most relevant for todayâ€”in Chapter 3, â€œHaving an Experience.â€

Deweyâ€™s notion of an experienceâ€”most often a common interactionâ€”is key to artâ€™s critical role in our lives: It constantly redirects our focus to the vital import of â€œordinaryâ€ experience. Arguably, it is the most salient function of photography. Case in point: Vivian Maier, whose gelatin silver prints are featured at Monroe Gallery through April 22. Vivian Maier (1926-2009), born in the Bronx, worked as a nanny in Chicago in the 1950s and 1960s. Returning to New York City, she would pass her whole life as a caregiver, supported in the poverty of her old age by three of the children she had nannied in her early years. All she left behind was a storage locker stuffed with memorabilia. Unclaimed and delinquent in payment, the locker contentsâ€”placed in a Chicago auction house in 2007â€”were found to contain some 100,000 negatives, mostly in undeveloped rolls, taken by Maier over five decades. The negatives developed thus far reveal powerfully understated work by a major urban photographer of the last half of the twentieth century.

A first, cursory look reveals the consistent depth of her work and the unerring eye with which she imbued formal and narrative import across a wide range of subjects. Maierâ€™s sense of place is especially evident in her shots of New York Cityâ€”for example, in scenes that evoke paintings by the Ash Can School: the street faÃ§ade in September 28, 1959, 108th St. East, New York recalling Edward Hopperâ€™s 1930 Early Sunday Morning, or the John Sloan rooftop view of the dining couple framed in the window of the second-floor Chop Suey restaurant (Untitled, 1953). The latter photoâ€™s choice of an unusual vantage to underscore human exchange occurs again in New York, NY, April 1953, another restaurant shot, taken from a railing directly above a young woman and a man in army uniform holding hands across a tableâ€”a private moment whose intimacy is breached innocently by the cameraâ€™s lens and ominously by the date of the print, taken some three months before the end of the Korean War.

Maierâ€™s shots of human encounters are more than matched by her views of urban locales, where an epic sense of place vies with their sheer artistry as formal studies. An aerial view of a steel pylon dwarfing two pedestrians nearby (Untitled, no date); a wormâ€™s eye view of a huge warehouse whose towering wall is stenciled with an â€œXâ€ formed by the crossed shadows of two adjacent steel girders from an elevated train line (Unknown, September 1956); in Undated, Chicago, the dramatic recession to a distant vanishing point, beyond its pinhole portal at the far side, of a skyscraperâ€™s colossal portico whose soaring Promethean columns are mocked by their incorporeal shadows strewn across its retreating marble corridor; in Untitled, 1955, a promenade high above the East River overlooking a massive Romanesque building enveloped in mist hosts a family of sightseers menaced by the looming bulk of a sharply foreshortened lifeboat suspended overhead, pointing far beyond and below them to a fog-laden inlet between the docksâ€”a brilliant, blade-runner composition in black and white.

Finally, there are the crowd shots like 1954 New York in which Maierâ€™s extraordinary eye for the ordinary mediates a benign balance between the monumental and the intimate, achieved in each instance by her attention to that rare, fleeting composition where the human subject exerts a dual role as formal agent and narrative device.