We are very pleased that our forthcoming exhibition is featured in the February/March issue of The Santa Fean magazine, just out this week.
ART
openings  reviews  people
﻿ 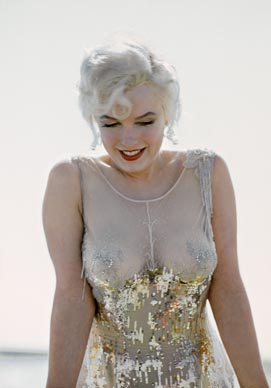 The Monroe Gallery of Photography (112 Don Gaspar, 505-992-0800, monroegallery.com﻿), where this Richard C. Miller picture of a relaxed-in-her-gorgeousness Marilyn Monroe (from the set of the 1959 Bill Wilder classic Some Like It Hot) can be found, specializes in iconic imagery: Ellis Island in its neglected beauty, the Civil Rights movement, the famous, the infamous. But as with this color image of Marilyn, the photographer(s) at Monroe's rarely if ever seek to capitalize or promote celebrityhood or nostalgia, they're after those ineffable Garry Winogrand-type moments of the unexpected, the off-guard, the interstitial, which reveal far more about time, place, and people than anything posed or staged, such as this very human, very lovely side of a woman whose fans and handlers rarely allowed to be human or lovely. -- Devon Jackson
RICHARD C. MILLER: 1912 - 2010
A RETROSPECTIVE
Fenruary 11 - April 24
View the exhibition here.