Rise and Fall of Apartheid 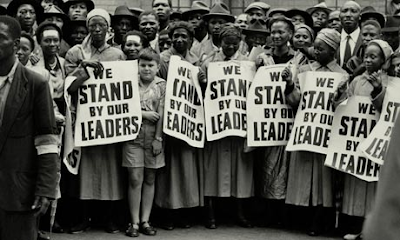 An anonymous photograph of the crowd at the opening day of the 1956 'Treason Trial', in which 156 anti-apartheid leaders were accused of treason. Photograph: Times Media Collection/Museum Africa, Johannesburg

Via The Guardian
Jason Farago
Friday 14 September 2012
An ambitious exhibition at New York's International Center of Photography documents the cruelties and absurdities of life in apartheid-era South Africa
South Africa has given the art world a good number of famous photographers â€“ David Goldblatt, Santu Mofokeng, Roger Ballen â€“ but the wider photographic history of the country remains almost unknown. That would be enough to make Rise and Fall of Apartheid, the extensive and strikingly ambitious exhibition now open at the International Center of Photography in New York, into an important event.

What makes this show unmissable is something else: the forceful argument of its Nigerian-born curator, Okwui Enwezor, that apartheid-era South Africa was "essentially a neofascist culture", and photography, more than any other artistic medium, offered a means to reinforce it or to contest it.
It's a broadly chronological show, and its opening galleries show the speed with which South African photography was transformed from an ethnographic practice to an engaged, politicised one.

Photographic output exploded after the institution of apartheid in 1948, especially in the contested spaces of South Africa's cities. In one shot we see a bench marked Whites Only, where a young fair-haired girl sits while her black nanny hovers behind her. In another, an older white woman in pearls is sitting on a bench with the same repugnant text on it â€“ but she's wearing a black sash, the symbol of the non-violent women's anti-apartheid organisation. 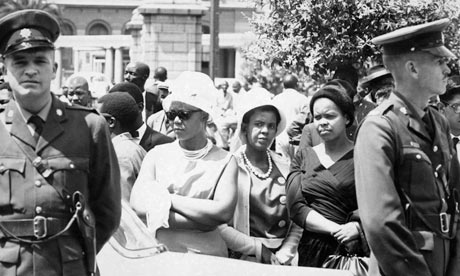 Photography was never just a documentary tool in South Africa. It was also, especially for the black majority, a means of self-fashioning. Drum Magazine, founded in Johannesburg in 1951, modernised the image of the black South African from rural native to urban habituÃ©. Photographers of all races contributed, and the magazine mixed reportage with fashion and arts photography: there's a killer shot by JÃ¼rgen Schadeberg of Miriam Makeba in a strapless dress, singing with her eyes closed. Elsewhere in the show there are grimly fascinating photographs by Billy Monk, a bouncer at a Cape Town nightclub in the 1960s, whose snaps of drunk white revellers necking liquor and groping each other are a far cry from National Party propaganda, or the arid fashion magazines Enwezor displays beneath them.

But as the apartheid regime grew more severe â€“ with the banning of the ANC and the imprisonment of Nelson Mandela â€“ the character of the photos changed. The photographers of this era were rarely on assignment: they were actors in the struggle. During the Soweto Uprising of 1976, Sam Nzima photographed a 12-year-old boy shot by police â€“ and then bundled him into a car to take him to a clinic, where the boy was pronounced dead.

Funerals, in particular, frequently served as a key vehicle for black visibility and political action. Mourners gathered by the thousands after the Sharpeville massacre, Steve Biko lying in his open casket, Winnie Mandela alongside the mothers of assassinated activists: these images came to symbolise the apartheid struggle itself, and made racial separation into a matter of life and death. 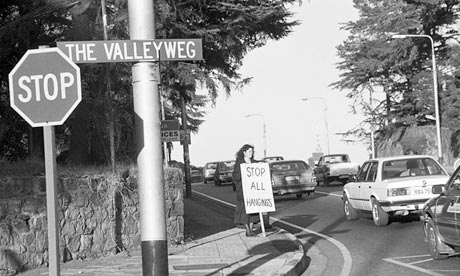 Harriet Gavshon in Jan Smuts Ave, Johannesburg, by Gille de Vlieg. The image records part of a Black Sash protest stand on 19 July 1985 in which protesters had to stand alone, or be arrested as an illegal gathering. Photograph: Gille de Vlieg

By the 1980s, the anti-apartheid movement had gone global, and the art world took notice. Hans Haacke created fake advertisements for Alcan, the erstwhile Canadian mining giant with large holdings in South Africa, that featured Biko beaten to death. Adrian Piper defaced pages of the New York Times which featured reports on apartheid with grotesque charcoal drawings. And in turn South African artists, from William Kentridge to Zwelethu Mthethwa, gained international attention for work that exposed the cruelties and absurdities of life under the apartheid regime.

In the final gallery we see the famous photograph, shot by Graeme Williams, of Nelson Mandela emerging from prison, his fist raised in the air. But Enwezor refuses to sound a falsely triumphant note at the end of this commanding exhibition. There are no images of happily queuing black South Africans voting in the 1994 election â€“ but bodies dead in the street, or graves being dug for the victims of political violence that continued even after apartheid's end. And the young photographer Thabiso Sekgala shows us a scene from one of the former bantustans: scorched grass, stunted trees, barbed wire, a rusting car, a shack made of plywood and corrugated iron. There is little sign that anyone will ever live here again. The photograph is called "Inheritance."

More on this story