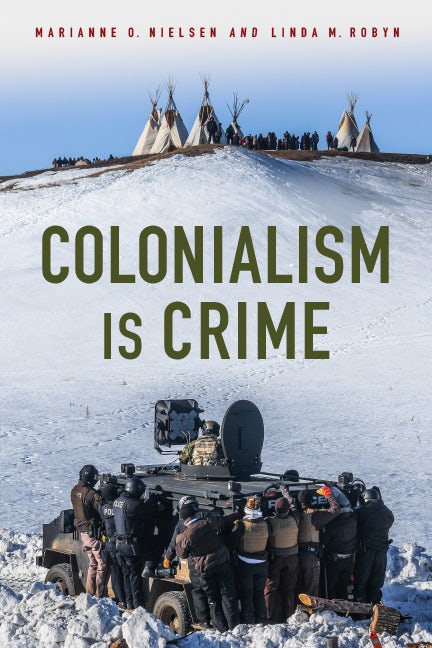 
About the book:
There is powerful evidence that the colonization of Indigenous people was and is a crime, and that that crime is on-going. Achieving historical colonial goals often meant committing acts that were criminal even at the time. The consequences of this oppression and criminal victimization is perhaps the critical factor explaining why Indigenous people today are overrepresented as victims and offenders in the settler colonist criminal justice systems. This book presents an analysis of the relationship between these colonial crimes and their continuing criminal and social consequences that exist today. The authors focus primarily on countries colonized by Britain, especially the United States. Social harm theory, human rights covenants, and law are used to explain the criminal aspects of the historical laws and their continued effects. The final chapter looks at the responsibilities of settler-colonists in ameliorating these harms and the actions currently being taken by Indigenous people themselves.


About the cover:
Between April of 2016 and March of 2017 one of the largest social justice movements in American history took place in the plains of North Dakota on the Standing Rock reservation. With an oil pipeline threatening the drinking water of the Standing Rock Sioux and 17 million people downstream on the Missouri River, thousands of people ascended upon the resistance camps to stand in solidarity with the Lakota Sioux and oppose the construction of the pipeline. From early spring of 2016 to late winter of 2017, over 15,000 people camped in tipis, army tents and vehicles without the use of electricity in an attempt to raise awareness and prevent the possible contamination of Lake Oahe, the source of drinking water for the reservation. Over 300 tribes and indigenous communities traveled to the camps, as well as nearly 4000 veterans and 500 clergy, to stand in solidarity with the NODAPL movement.

In September of 2016, Ryan Vizzions traveled from Atlanta, Georgia to stand in solidarity with the movement. Bringing his camera with him, but not intending to be a media source, Vizzions soon found himself using social media to reach over half a billion people with his photographic documentation of events unfolding over the months. With viral reach of one photograph in particular, "Defend The Sacred", Vizzions’ photography helped bring awareness around the world to the movement. Vizzions documentation of his 6 months at Oceti Sakowin camp was selected for the "Photos of the Year" by People Magazine, ABC News, The Guardian, Artsy.net; and as well his work has been featured in the Nobel Peace Prize forums, Adbusters, Huffington Post, Mother Jones, Amnesty International and many more publications as well as books such as "The Militarization of Indian Country" by Winona LaDuke & "An Indigenous Peoples History of The United States" by Roxanne Dunbar-Ortiz.