Photographer follows resurgent career back to Santa Fe with exhibit 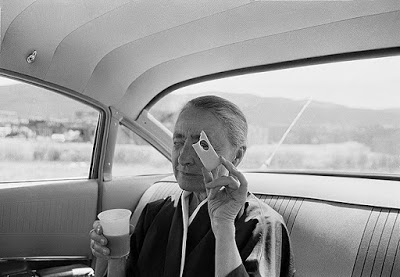 On assignment from LOOK magazine, Vaccaro had traveled to New Mexico by train with art editor Charlotte Willard.

O’Keeffe had been expecting a different photographer, one of her favorites, such as Ansel Adams, Todd Webb or Richard Avedon.

Trying his best to charm her, Vaccaro cooked O’Keeffe a steak and fixed her broken washing machine, to no avail.

Suddenly, the topic turned to bullfighting. Vaccaro mentioned he had met the great Spanish matador Manolette.

The artist pivoted in her seat to face him. She never looked at Willard again.
“When O’Keeffe found out, she kind of embraced me and that’s when we became the greatest friends,” the 95-year-old Vaccaro said in a telephone interview from his home in Long Island City, N.Y. 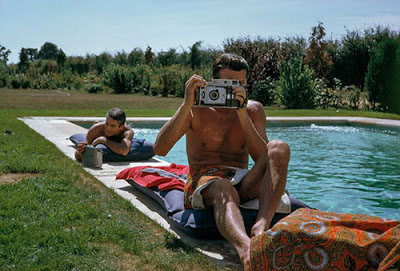 Givenchy by the Pool, South of Paris, France, 1961
©Tony Vaccaro
Santa Fe’s Monroe Gallery of Photography is exhibiting more than 50 photographs by the acclaimed photographer in “Tony Vaccaro: Renaissance,” opening Friday, Nov. 23. The gallery will offer a free screening of the 2016 HBO documentary “Under Fire: The Private Untold Story of Private First Class Tony Vaccaro” at 2:30 p.m. Saturday, Nov. 24, followed by a question-and-answer session with the photographer. The show will hang through Jan. 27, 2019.

After that initially frosty meeting, Vaccaro spent a month in Abiquiú photographing O’Keeffe, producing some of her most iconic portraits.

The photographer captured “Georgia O’Keeffe with cheese” while they were traveling. The artist looks playfully at the camera through a hole in a piece of Swiss cheese.

“We had decided to go to the desert for a picnic,” Vaccaro said. “The desert she liked was White Sands. I arranged the catering, the salad, everything, but it began to rain, so we moved into the car. So we had the picnic sitting in the car. I was driving; I looked back and I saw her looking at me through a hole in the cheese.”

Vaccaro kept in touch with O’Keeffe over the years.
“She had an opening in 1971 at the Whitney Museum,” he said. “We were talking. She pulled me away and said, ‘Tony, let’s go see our picture,’ which is the famous one where she holds a famous painting she had made.” 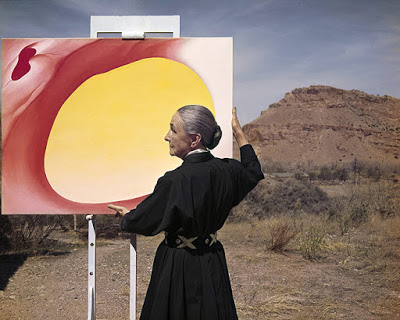 ne fashion assignment featured a collection of hats. Vaccaro spotted a spiral-shaped hat resembling a certain building. He asked the slinky model Isabella Albonico to pose in the chapeau in front of the Guggenheim Museum.

He said Albonico sported the longest neck he had ever seen.

“You look at Isabella’s face and you know she thinks it’s funny,” he added.

“I saw Frank Lloyd Wright design the Guggenheim from scratch,” Vaccaro continued. “I photographed it as it went along.” 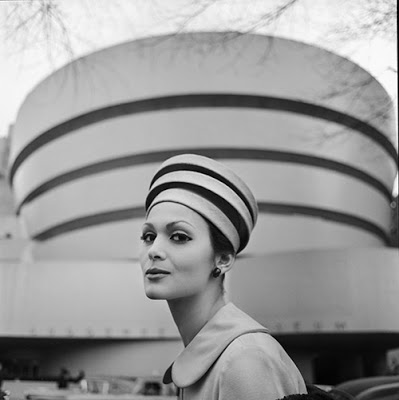 The HBO documentary about Vaccaro’s war photography has kindled a career resurgence. He will turn 96 on Dec. 20.

Vaccaro was drafted into World War II at the age of 21. By the summer of 1944 he was on a boat heading toward Omaha Beach six days after the first landings at Normandy. Vaccaro was determined to photograph the war and brought his portable 35mm Argus C-3. He fought on the front lines, developing his photos in combat helmets at night and hanging the negatives from tree branches.

The result was “White Death, Pvt. Henry Irving Tannebaum, Ottre, Belgium,” 1945, one of the most famous photographs of the war.

“I took that picture and at that time this man had a son who was 1 year old,” Vaccaro said. “Fifty years later I got a phone call saying, ‘I am the son of Mr. Tannebaum.’ He said, ‘Would you take me where you took the picture of my father dead in the snow?'”

He did, only to find the spot had disappeared.