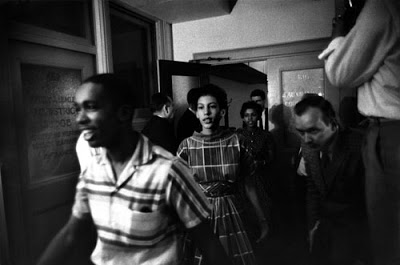 On September 2, 1957, the night before school was to start for the year, Arkansas Governor Orval Faubus called out the state's National Guard to surround Little Rock Central High School and prevent any black students from entering in order to protect "citizens and property from possible violence by protesters" he claimed were headed in caravans toward Little Rock.


A federal judge granted an injunction against the Governor's use of National Guard troops to prevent integration and they were withdrawn on September 20.

When school resumed on Monday, September 23, Central High was surrounded by Little Rock policemen. About 1,000 people gathered in front of the school. The police escorted the nine black students to a side door where they quietly entered the building as classes were to begin. When the mob learned the blacks were inside, they began to challenge the police and surge toward the school with shouts and threats. Fearful the police would be unable to control the crowd, the school administration moved the black students out a side door before noon.

U.S. Congressman Brooks Hays and Little Rock Mayor Woodrow Mann asked the federal government for help, first in the form of U.S. marshals. Finally, on September 24, Mann sent a telegram to President Eisenhower requesting troops. They were dispatched that day and the President also federalized the entire Arkansas National Guard, taking it away from the Governor.

On September 25, 1957, nine black students entered the school under the protection of 1,000 members of the "Screaming Eagles" of the 101st Airborne Division of the United States Army.

The Little Rock Nine, as they nine students came to be known, were a group of African-American students who were enrolled in Little Rock Central High School in 1957. The ensuing Little Rock Crisis, in which the students were initially prevented from entering the racially segregated school by Arkansas Governor Orval Faubus, and then attended after the intervention of President Eisenhower, is considered to be one of the most important events in the African-American Civil Rights Movement.

Little Rock Central High School still functions as part of the Little Rock School District, and is now a National Historic Site that houses a Civil Rights Museum, administered in partnership with the National Park Service, to commemorate the events of 1957.