On September 4, 1957, the "Little Rock Nine" attempted to enter Little Rock Central High School but were turned away by Arkansas National Guard troops called out by the governor. When Elizabeth Eckford arrived at the campus at the intersection of 14th and Park Streets, she was confronted by an angry mob of segregationist protestors. She attempted to enter at the front of the school but was directed back out to the street by the guardsmen. Walking alone, surrounded by the crowd, she eventually reached the south end of Park Street and sat down on a bench to wait for a city bus to take her to her motherâ€™s workplace. Of her experience, Eckford

They moved closer and closer. ... Somebody started yelling. ... I tried to see a friendly face somewhere in the crowdâ€”someone who maybe could help. I looked into the face of an old woman and it seemed a kind face, but when I looked at her again, she spat on me. 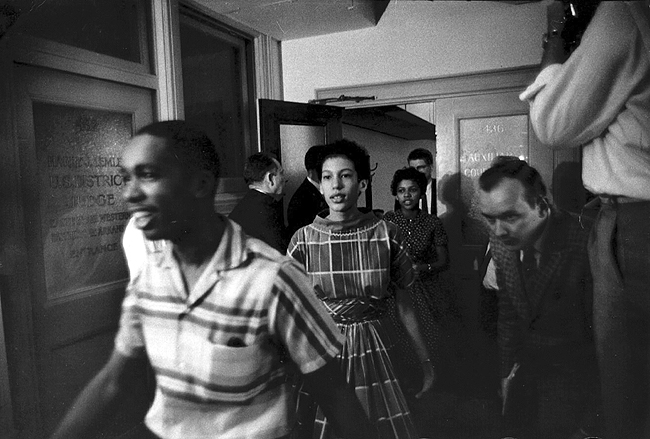 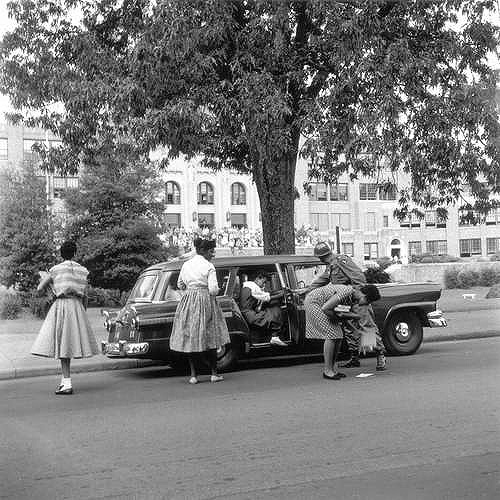 Ernest C. Withers
Desegregation of Central High School by The "Little Rock Nine", Little Rock, 1957
September 25, 1957, became a historic day in the Nation when nine courageous children risked their lives to attend Central High School in Little Rock, Arkansas. Confronted by a hostile crowd and escorted by the Screaming Eagles of the 101st Airborne, they shouldered the burden of integrating a then segregated public school system. Although the Supreme Courtâ€™s Landmark 1954 decision in Brown v. Board of Education struck down racial segregation in public schools, it was the courageous actions of these nine young champions of school integration that tested the strength of that decision. Their actions not only mobilized a Nation to insure that access to a quality education was granted to all Americans, but they helped to define the civil rights movement. They became known as the Little Rock Nine. via LittleRock9.com