Discovery, the world's most traveled spaceship, thundered into orbit for the final time Thursday, heading toward the International Space Station on a journey that marks the beginning of the end of the shuttle era. Discovery is the oldest of NASA's three surviving space shuttles and the first to be decommissioned this year. Two missions remain, first by Atlantis and then Endeavour, to end the 30-year program.


It was Discovery's 39th launch and the 133rd shuttle mission overall. Discovery already has 143 million miles to its credit, beginning with its first flight in 1984. By the time this mission ends, the shuttle will have tacked on another 4.5 million miles. And it will have spent 363 days in space and circled Earth 5,800 times when it returns March 7. No other spacecraft has been launched so many times.


49 years ago, President John F. Kennedy laid out the ambitions for the United States Space Program. 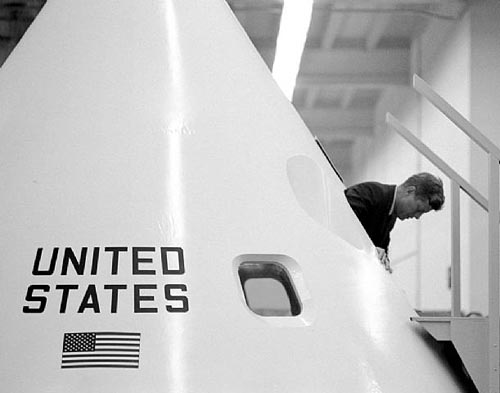 On a very hot late summer's day, September 12, 1962, President Kennedy visited the Manned Spacecraft Center, Houston. After a brief tour, he delivered brief remarks about the rapid achievements made by the country's space exploration program in recent years and its plans for future projects.

President Kennedy then travelled to Rice University in Houston, Texas, and gave this speech outdoors in the football stadium. The President spoke in philosophical terms about the need to solve the mysteries of space, reaffirmed America's commitment to landing a man on the moon before the end of the 1960s and also defended the enormous expense of the space program.


It is for these reasons that I regard the decision last year to shift our efforts in space from low to high gear as among the most important decisions that will be made during my incumbency in the office of the Presidency."