Simone Leluault, one of the heroines of Tony Vaccaro's iconic Kiss of Liberation, has died 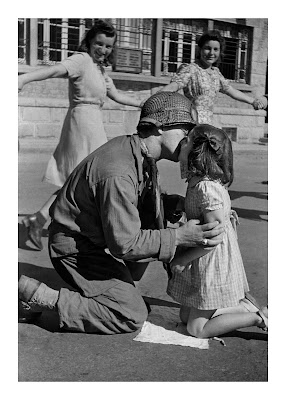 Tony Vaccaro’s famous “Kiss of Liberation”. The young woman seen in the background on the left is Simone Leluault, who died Wednesday, November 24, 2021 © Tony Vaccaro

She embodied Freedom and rediscovered joy. France saved by the Allies and delivered from the Nazis. Simone Leluault passed away on Wednesday November 24, 2021, at the age of 95.

She was one of the dancers of the famous Kiss of Liberation. An image taken by the American war photographer Tony Vaccaro, on August 15, 1944, during the liberation of the small village of Saint-Briac, located near Dinard, in Brittany.

The photo was selected by General Eisenhower as a symbol of American action in Europe during World War II. It was printed in five million copies and distributed throughout the world.

“This photo is almost an accident”

“Oh, you know, this photo is almost an accident,” Tony Vaccaro told us during one of his trips to France 70 years later.

A happy accident dated August 15, 1944. That day, Saint-Briac, liberated by General Patton’s 83rd Infantry Division, was won over by popular jubilation. On the Place du Center, we take out the accordion, a party is improvised. A circle is formed. A man has to go get a woman and the two people have to kiss each other on a mat in the center of the circle. Then it’s the woman’s turn to choose a man and take him to the center mat.

I was in the square, across the street. And there, I recognize this American soldier, my friend Gene Constanzo, crouching and kissing a little girl in the middle of a group of young girls dancing around him

The power of an image

The GI's crosses the square at full stride. He guessed the strength of the scene. The tenderness and joy carried by this image. The Kiss of Liberation is in the box. Forever.

The next day, I went by jeep to the surroundings of Rennes. I needed a studio and chemicals to develop my photos. The negatives were perfect!

We never knew who the kissed little girl was at the heart of the photo. Tony Vaccaro, on the other hand, has kept in touch all his life with the two young women, in the background. Sisters Marie-Thérèse and Simone Crochu.

70 years later, in front of the famous enlarged photo on the pediment of the town hall of Saint-Briac, the former American war reporter and Simone Leluault faced the crowd, in the presence of John Kerry, then head of American diplomacy, during the inauguration of the “Tony Vaccaro Square”.

Wounded by a shard

Simone had publicly remembered the summer of 1944 when she almost lost her life. She was on a train that had been targeted by an English plane. Wounded by a shard, the 18-year-old young woman had been miraculously saved by a bundle of artichokes that she held against her. “And it wasn’t a leg injury that was going to stop him dancing a few weeks later,” John Kerry had teased from the podium. Simone had answered him with a big smile. That same smile forever imprinted in the history books.