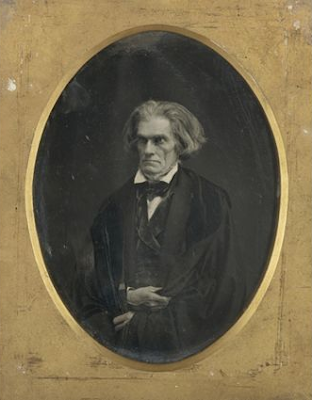 John C. Calhoun by Mathew Brady, 1849
ï»¿
I don't get to do much breaking news here, but this morning I attended the morning session of Sotheby's spring photography auction in New York, where a 1849 daguerreotype of the great American politician John C. Calhoun sold for $338,000.


If you believe--as I sort of do--that art sales results reflect the overall state of the economy, then the morning session today indicates that we are well underway with recovery from the financial perils of 2008. Buyers seem to be sticking with the classics, though, just in case the rug gets pulled out again: A circa-1960s print of Ansel Adams's "Mount Williamson, Sierra Nevada, From Manzanar, California," sold for $182,500, and Edward Weston's "Dunes, Oceano," shot in 1936 and printed in the 1940s, went for $158,500. 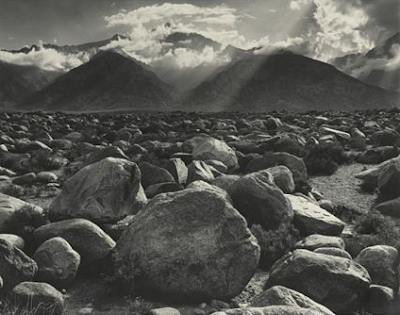 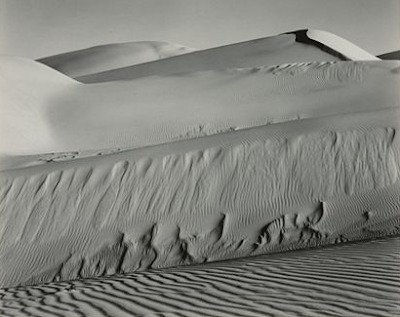 "Dunes, Oceano," by Edward Weston
As is typical these days, the auction gallery at Sotheby's was sparsely populated--perhaps 50 to 75 bidders on hand. (My friend Stephen Perloff, who edits The Photograph Collector newsletter, likens auctions these days to a Mets game in September.) But there was plenty--plenty--of auction action phone bidders. Denise Bethel, head of Sotheby's photography department, handled it all with aplomb from her podium, her voice sometimes sounding like one of those police dispatchers in old movies (Lot 41...Timothy O'Sullivan...Canyon de Chelle...thank you...over and out...").

The big dag of the day was made by Mathew Brady in 1849. The image became one of his most famous portraits, noted for the way it captured Calhoun's penetrating gaze (or as my son Henry would say, his "crazy-ass eyes.") It was widely printed and was used as the basis of a painting by Henry Darby that is now owned by the U.S. Senate. The actual object for sale here--the daguerreotype--was only recently rediscovered, according to Sotheby's.

High prices at auction often simply reflect the competition between two motivated bidders, and that seemed to be the case with this lot. But objects like this, in their rarity, have intrinsic historical value. Calhoun was a giant of American politics, a cngressman, senator, secretary of war under James Madison and vice president under both John Quincy Adams and Adams's archrival Andrew Jackson. He was a great orator in an era of oratorical greatness, parrying with Daniel Webster and Henry Clay. He was a champion for his state, South Carolina, which at the time was pushing the idea of nullification--whereby states could ignore federal laws they didn't like. Jackson killed that effort, saving the union for another 30 or so years.

All in all, an interesting morning.