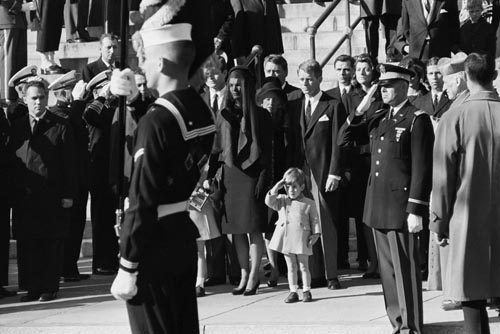 It’s so iconic the rights to publish and use it have been resold twice for millions of dollars.“Stan wound up with $25."

“One exposure on a roll of 36 exposures,” Stan Stearns marveled decades later. The young news photographer, in one instinctive click, captured one of the most poignant and reproduced images of the past half-century: little John F. Kennedy Jr., grief-stricken, saluting his father’s coffin as it rolled by on a caisson.

Mr. Stearns died of cancer March 2 at the Mandrin care facility in Harwood, said his niece, Karla Bowles. He was 76 and had spent the past four decades running a photography studio in his native Annapolis.

His most enduring contribution to photography indisputably came on the chilly morning of Nov. 25, 1963, when he covered the funeral procession of the President John F. Kennedy.

Mr. Stearns was working in Washington for the United Press International wire service when Kennedy was killed in Dallas. Outside Washington’s Cathedral of St. Matthew the Apostle, where the president was celebrated and mourned a few days later, Mr. Stearns was jammed with 70 other photojournalists into a roped-off space meant for perhaps half as many.

As Kennedy’s caisson rolled by, Mr. Stearns trained his telephoto lens on first lady Jacqueline Kennedy, who was veiled in black. When she bent down to whisper in her son’s ear, Mr. Stearns clicked as 3-year-old John Jr.’s right hand snapped into a salute. The boy was dressed in a blue dress coat and short pants. It was also his birthday.

“As the caisson was rolling out to Arlington Cemetery,” Mr. Stearns later recalled, “I asked every photographer I could if they had the salute. Duh! Nobody saw it. Everyone I talked to had been concentrating on Jackie and the caisson.”

He returned to the office, satisfied that he had the best picture of the day.

“The bureau chief almost had a hemorrhage,” Mr. Stearns told the Annapolis Capital in 2009. “I never saw a man turn as white as he did because I was not with the entourage going to Arlington. Then the big boss from New York overheard that and he said, ‘You better have it or you’re fired on the spot.’ ”

The picture made the front pages of newspapers worldwide and was printed in mass-circulation magazines such as Life. The image came to define the emotion of the event in a way words may not have had the power to convey.

Just the mention of the salute can still revive memories for those who lived through that day. It remains one of perhaps a handful of pictures that evoke the span of the mid-20th century: Joe Rosenthal’s image of the flag-raising on Iwo Jima during World War II, Eddie Adams’s photo of a South Vietnamese general’s street-side execution of a suspected Viet Cong, Nick Ut’s picture of a naked Vietnamese girl fleeing a napalm attack.

Mr. Stearns’s picture still resonates so completely because it speaks to the “trope of the brave little soldier that existed in American visual culture,” said Alison Nordstrom, a senior photography curator at the George Eastman House, a photography museum in Rochester, N.Y.

Nordstrom said the Kennedys so fascinated the public because they were a young, photogenic family and so vibrant in the wake of the Eisenhower years. Familiar images of the Kennedy children — John Jr. hiding under his father’s desk, the president’s daughter Caroline with a pony — crystallized the way the public knew and identified with the family.

Mr. Stearns’s image of the salute brought it all together, Nordstrom said, “a combination of familiar tropes and familiar sentiments with figures who felt known to us.”

In 1999, John Kennedy Jr. was presumed dead after a small airplane he was piloting went missing. He was 38. Mr. Stearns’s picture was again summoned to remind readers and viewers of what the former first son had once represented.

“I felt a strong connection to him,” Mr. Stearns told the Baltimore Sun in 1999. “Covering the White House during the Kennedy years, I had a son just two years younger than John-John.”

Stanley Frank Stearns was born May 11, 1935, in Annapolis, where his parents owned a jewelry shop. His interest was jazz drumming until a relative gave him a Brownie Flash Six-20 camera for his bar mitzvah. He attended Annapolis High School and, at 16, began working as a photographer for the Capital newspaper.

He was an Air Force photographer from 1954 to 1958, taking pictures for military publications in Japan, and then joined UPI in a position he later described as “one step above floor sweeper.”

Mr. Stearns left the wire service in the early 1970s to start a photography studio in Annapolis. He continued working until his death. His niece described him as “cantankerous and very meticulous.”

His marriage to Maxine Skwersky ended in divorce. Survivors include a son, commercial photographer Jay Stearns of Annapolis; a brother; and four grandchildren.
News and government photographers periodically made claims to the famed image of the salute. All were discredited, but the compensation was entirely in glory, Mr. Stearns wryly noted.

“I got $25 for winning picture of the month” at UPI, he told the Sun. “That and my regular paycheck. It’s frustrating when I think of how much money that picture has made in the last 30 years. Probably $3 million to $5 million.”