After all the tumult of 2020—an extraordinary year that brought a deadly pandemic, political turmoil, racial reckonings, and record-breaking wildfires—it’s fitting that National Geographic is publishing its first-ever Year in Pictures issue 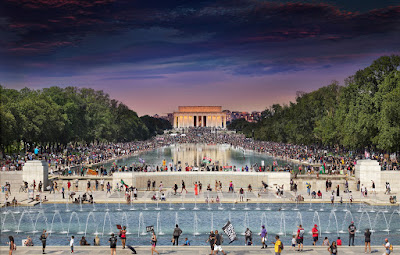 Commitment March: Get Your Knee Off My Neck, Washington, DC, Day to Night, August, 2020
Fifty-seven years to the day after Martin Luther King, Jr., delivered his “I Have a Dream” speech in front of the Lincoln Memorial, another march drew thousands of people to Washington, D.C., to protest police brutality and racial injustice. To capture this scene, Stephen Wilkes photographed from a single fixed camera position on an elevated crane, making images at intervals throughout a 16-hour period. He then edited the best moments and blended them seamlessly into one image.
“This is Stephen bringing his unique way of capturing time to one of the seminal moments of the summer,” Moran says. “The beauty of it as you look through this photograph, not only do you get that sense of movement across that day but on all those different screens you see the main characters, including Rev. Al Sharpton and Martin Luther King’s granddaughter, who were critical to the day’s success.”

Tags: Commitment March Day to Night Photos of the year pictures of 2020 protest