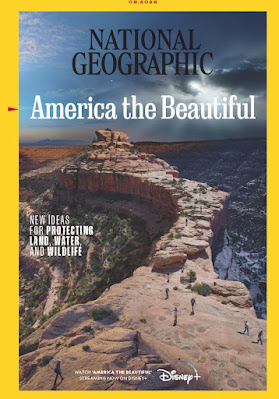 Stephen Wilkes photograph of the Bears Ears National Monument in Utah is the cover of  National Geographic's â€œAmerica the Beautifulâ€ issue. "This photograph of Bears Ears National Monument in Utah is one of four Day to Nightâ€™s I created for the September 2022 issue. The spectacular landscape of Bears Ears Monument is a symbol of the risk to some of the country's unique and irreplaceable places. One president preserved it at the urging of Native Americans who hold it sacred, another tried to open it to drilling and mining.

A national monument rich with archaeological sites, it includes the Citadel, once a fortified cliff dwelling, now a popular hiking spot. I took 2,092 photographs over 36 hours and selected 44 for this image. Beyond the sense of awe and beauty, there's a palpable sense of history with every step you take.

Bears Ears was one of the most challenging Day to Nights I have created. After a long day of traveling my team and I hiked out over an hour with several hundred pounds of gear to our shoot location and set up camp for the next three days. Over the duration of our shoot we photographed while battling steady 45 mph winds, and were blessed to be able to capture the sunrise, a full moon and a rare alignment of the planets, Jupiter, Venus, Mars, and Saturn." --Stephen Wilkes