STEVE SCHAPIRO: Once Upon A Time In America 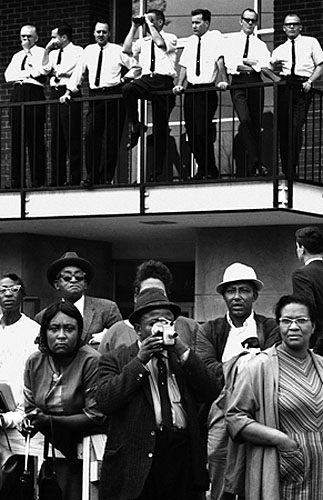 
Join us Saturday, July 5, from 5 - 7 PM for a public reception with Steve Schapiro for the opening of the new exhibition "Once Upon A Time in America".


Steve Schapiro discovered photography at age of nine at a summer camp. Excited by the camera's potential, he would spend the next decades prowling the streets of his native New York trying to emulate the work of the great French photographer Henri Cartier-Bresson. Schapiro was a disciple of the great photographer W. Eugene Smith, and shared Smith's passion for black and white documentary work. From the beginning of Schapiro's career, he had already set a mission for himself: to chronicle the "American Life". His career in photography began in 1960 with personal documentary projects on "Arkansas Migrant Workers" and "Narcotics Addiction in East Harlem". Schapiro became involved in many civil rights stories including the Selma March and covering Martin Luther King; he traveled with Bobby Kennedy on his Senate campaign and Presidential campaign; and did photo essays on Haight Ashbury, the Pine Ridge Sioux Indian Reservation, and Protest in America. He photographed Andy Warhol and the New York art scene, John and Jacqueline Kennedy, poodles, beauty parlors, and performances at the famous Apollo Theater in New York. He also collaborated on projects for record covers and related art. As picture magazines declined in the 1970's and 80's he continued documentary work but also produced advertising material, publicity stills and posters for films, including, The Godfather, Rambo, The Way We Were, Risky Business, Taxi Driver, and Midnight Cowboy.

Tags: Rambo Civil Rights Martin Luther King Jr Risky Business photojournalism Taxi Driver and Midnight Cowboy The Godfather Steve Schapiro The Way We Were Once upon a time in America