Sunday: Dick Stolley tells the story of the Zapruder film

As Jacqueline Kennedy crawls away from her fatally wounded husband, Secret Service Agent Clint Hill jumps onto the back of President Kennedy's limousine, in a frame from Abraham Zapruder's amateur movie of the assassination. (The Sixth Foor Museum: Zapruder (1967); WFAA TV Collection)
(Via CBS News) - "It was the single most dramatic moment of my 70 years of journalism," Dick Stolley, former editor of LIFE magazine, says of his first time watching the film of President John F. Kennedy's assassination.

Sunday on "Face the Nation," we'll talk to Stolley, who helped the magazine purchase the 26 second film, as well as the granddaughter of the man who captured the most famous home movie in American history.

As offers poured in to purchase the film, Alexandra Zapruder says her grandfather feared his footage would be used distastefully. When Zapruder did hand over film to Stolley and his colleagues at LIFE, the contract mandated that the film be used "consonant with good taste and dignity."

We hope you'll join us Sunday for this special interview. Local listings here. 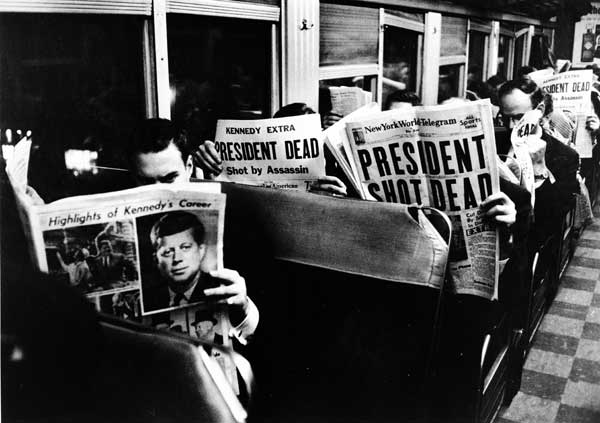 
Monroe Gallery of Photography, 112 Don Gaspar, is pleased to announce "The LIFE Photographers”, an exhibition concurrent with the publication of the new book "LIFE: The Day Kennedy Died, 50 Years Later LIFE Remembers the Man & the Moment". The exhibition opens with a public reception and book signing by renowned LIFE editor Richard Stolley on November 29, and will continue through January 24, 2014. The famous Zapruder film first appeared in LIFE, after being acquired by Richard B. Stolley. At the time, Stolley also interviewed Dallas police, Kennedy administration officials, members of the Oswald family, and workers at Jack Ruby's bar.

LIFE magazine photographers had unparalleled access to John and Jacqueline Kennedy, from even before they were married. Fifty years ago on November 22, 1963, in Dallas's Dealey Plaza, John Fitzgerald Kennedy, the 35th President of the United States, was assassinated while traveling in a motorcade with his wife, Jacqueline. LIFE magazine, the weekly pictorial chronicle of events in America and throughout the world, was quickly on the scene. The exhibition features a special selection of well-known historical Kennedy photographs and several seldom-seen rare images of the now-famous Kennedy mystique that was "Camelot".

LIFE published an astonishing number of the most memorable photographs ever made, and the exhibition also includes many of these photographs from defining moments of the 20th century. The preeminent LIFE photographers set the standard for presenting us with poignant images that seem to lift right off the page and vividly reflect our society’s mindset at the time.
The exhibition of more than 50 photographs also includes iconic images from World War II, and, of course, Alfred Eisenstaedt's sailor kissing the nurse on VJ Day; powerful photographs from the American South during the Civil Rights movement; memorable images of Sophia Loren, Marilyn Monroe, the Beatles and many more indelible photographs.

Related: EXCERPTS FROM AN EVENING OF PHOTOJOURNALISM