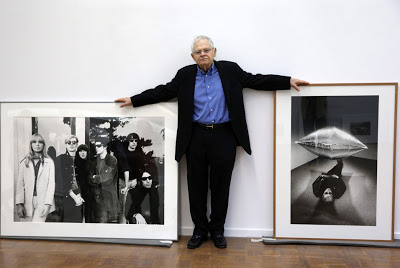 US photographer Steve Schapiro poses next to some of his works during a press conference at the Kunsthalle museum in Rostock, northeastern Germany. From March 23 to May 5, 2013, the museum presents around 150 photographs by Schapiro in the exhibition titled "Steve Schapiro - Then and Now - A Retrospective". AFP PHOTO / BERND WUESTNECK


ROSTOCK.- Steve Schapiro is the photographer behind countless now-classic portraits of rock stars, film stars and politicians from the 1960s and 70s. He is also an accomplished documentary photographer who recorded many of the greatest political and social upheavals of our times. While working as a 'special photographer' for the film studios, he designed several iconic film posters, most notably for Midnight Cowboy, Taxi Driver and The Godfather Part III. His extraordinary access has been the hallmark of an illustrious career.

A retrospective of Schapiro's work opened at the Kunsthalle Rostock, Museum of Modern Art in Germany on March 24, 2013. The show, which is curated by Dr. Ulrick Ptak, presents 150 photographs, many of them recently published for the first time in Schapiro's critically acclaimed retrospective Steve Schapiro: Then and Now (Hatje Cantz). The exhibition and companion book look back at Schapiro's diverse half-century career spanning 1961 to 2011. They portray the celebrities and politicians who shaped a generation, as well as new and unseen documentary work focusing on the marginalized and unidentified people on the street.

Then and Now includes whimsical portraits of the stars: Robert De Niro in full Taxi Driver combat costume, posed in front of his cab with a Mohican and an improbably chirpy smile; Jack Nicholson, nose bandaged, tongue out at the camera on the set of Chinatown; and Marlon Brando, grinning with theatrical devilishness while being made up for The Godfather.

When Schapiro started shooting in the sixties, it was the golden age of photojournalism. Schapiro's extensive work in this genre include his depiction of migrant workers in Arkansas, drug addicts in East Harlem, freedom bus riders, the Selma March to Montgomery, Alabama with Martin Luther King, Jr., and presidential campaigns, most notably that of Robert F. Kennedy. Among his most striking works is a triptych that presents photographs Schapiro took in Memphis in 1968 the day after the assassination of Martin Luther King, Jr. while on assignment for Life. Schapiro was the only photographer to capture the ominous handprint of King's assassin on the wall above the bathtub in the boarding house bathroom from where the fatal shot was fired.

The thread that connects all of Schapiro's photographs is his humanistic approach to his work. Whether shooting a celebrity or an anonymous person he is searching for that iconic moment. In his essay in the book, curator and author Matthias Harder writes that Schapiro's work reflects "the spirit of the times. It is not only his famous individual photos and groups of works from his engagement with Hollywood that ensure him a firm place in the history of photography of the twentieth and twenty first centuries, but also the diversity of his subjects and the sovereign, continuing mastery of them over such a long period of time."

Born and raised in New York City, Steve Schapiro started taking photographs at age ten while at summer camp. He attended Amherst College and graduated from Bard College, and studied photography with the legendary W. Eugene Smith. As a budding photographer, he got an early break: an assignment from Life magazine. He has never stopped working since. His work has been published in prestigious magazines and on numerous covers around the world, including Life, Look, Vanity Fair, Paris Match, People, and Rolling Stone. Schapiro's photographs were included in the Metropolitan Museum of Art's 1968 exhibition Harlem On My Mind. His work can be found in the collections of the Smithsonian, The High Museum of Art, and the National Portrait Gallery. Schapiro's recent solo shows were in Los Angeles, Amsterdam, London and Paris. The Fotografiska Museum in Stockholm, Sweden presented a retrospective of his work in the spring of 2012. An exhibition of his work entitled Schapiro: Living America opened at the Center for Photography Lumiere Brothers, Moscow in the fall of 2012, and included 180 images.

Steve Schapiro's photographs will be on exhibit during the AIPAD Photography Show April 3 - 7, Monroe Gallery of Photography, Booth #419. 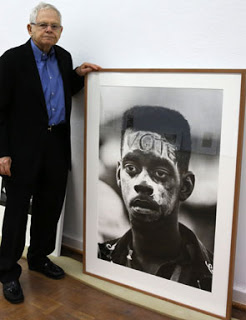