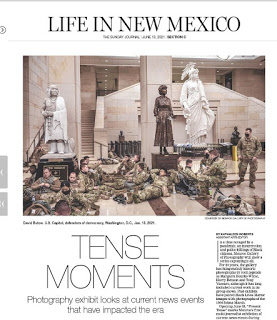 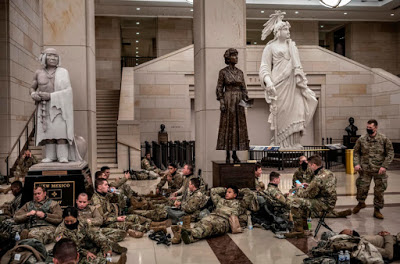 In a time ravaged by a pandemic, an insurrection and police killings of Black citizens, Monroe Gallery of Photography will show a series capturing it all.

For 20 years, the gallery has hung mainly historic photographs by such legends as Margaret Bourke-White, Harry Benson and Tony Vaccaro, although it has long included current work in its group shows. Past exhibits have paired Black Lives Matter images with photographs of the 1964 Selma March. 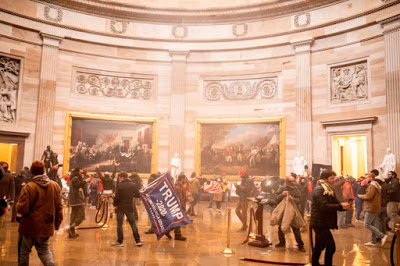 Ashley Gilbertson. A mixture of tear gas discharged by police and fire extinguisher residue discharged by pro-Trump extremists hangs in the air of the Rotunda as the crowd milled about, Jan. 6, 2021. (Courtesy of Monroe Gallery of Photography)

â€œThis is a first,â€ she said. â€œIt seems obvious to us that we are living in a completely unique history. The question of survivability is upon us. We wanted people to stand before this moment and stay with it.â€

David Butowâ€™s print of National Guardsmen sprawled across the U.S. Capitol floor after the Jan. 6 insurrection coincidentally captured the New Mexico statue of Poâ€™Pay, the leader of the 1680 Pueblo Revolt.

During the pandemic, Butow also shot an image of a masked couple walking the Hoboken, New Jersey boardwalk with an ominous Manhattan skyline in the background. 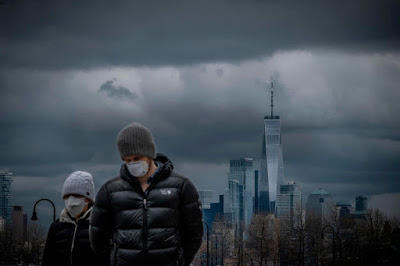 David Butow. With the skyline of lower Manhattan in the background, a couple strolls the boardwalk in Hoboken, New Jersey, during the COVID-19 pandemic, April 18, 2020. (Courtesy of Monroe Gallery of Photography)

The hazy light in Ashley Gilbertsonâ€™s image of the Capitol Rotunda reveals a chilling truth.

â€œAshley said the air inside was filled with teargas, bear spray and the fire extinguishers they had carried in,â€ co-owner Sidney Monroe said.

Gilbertsonâ€™s shot of Capitol Police Officer Eugene Goodman frames him in a doorway beneath the raised hands of insurrectionists.

â€œTo the left of him you can see the stairway that he led them through away from the Senate,â€ Michelle Monroe said. â€œIt recalls the man standing in front of the tanks at Tiananmen Squareâ€ in 1989. 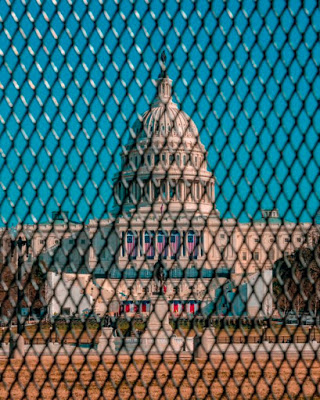 Gilbertson also captured the sense of desperation and despair in his photo of a food line in New Yorkâ€™s Chinatown during the pandemic.

Ryan Vizzionsâ€™ photo of the U.S. Capitol through its new fencing encapsulates the story of the insurrectionâ€™s aftermath. The photographer also shot an image of the late Civil Rights leader Sen. John Lewis marching in Atlanta. 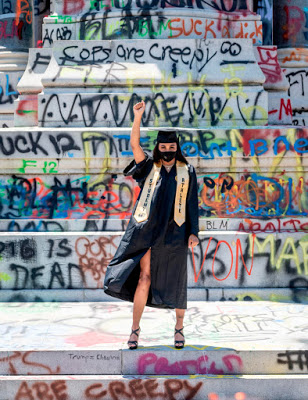 Sanjay Suchakâ€™s eerie photo of Charlottesville marchers at the University of Virginia Rotunda appears almost reverent until you realize they are white supremacists. Suchak also produced a compelling image of a college graduate giving a triumphant Black Power salute in front of a graffiti-scrawled Robert E. Lee statue in Richmond, Virginia. 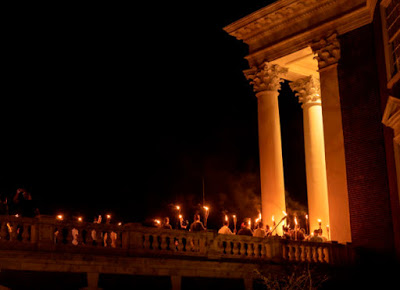 New Mexico photographer Gabriela Campos shot a scene closer to home when she photographed an Ohkay Owingeh dancer atop the empty platform where a statue of Don Juan de OÃ±ate once stood in Rio Arriba County. She also cemented a picture of COVID-19 exhaustion in her portrait of a trio of masked nurses at Santa Feâ€™s St. Vincent Regional Medical Center.

â€œThe impact and urgency of some of these photographs were immediately iconic,â€ Sidney Monroe said. â€œSometimes it takes decades. We donâ€™t need to wait a decade to look back.â€