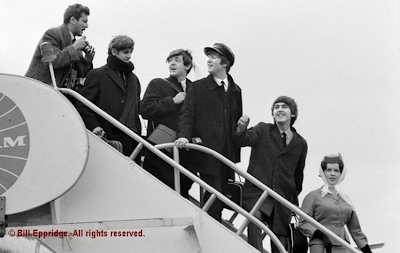 The Beatles exiting Pan Am Flight 101 at John F. Kennedy International Airport in New York on Feb. 7, 1964. The photograph, taken by Bill Eppridge, is included in the exhibit (Photo by Bill Eppridge. All rights reserved.)

The excitement and frenzy of Beatlemania is captured in a photographic exhibit opening Tuesday at the Michele and Donald Dâ€™Amour Museum of Fine Arts in Springfield.

The black and white photographs, taken for CBS television and LIFE magazine, recall the arrival of the Fab Four in New York, their historic appearance on the Ed Sullivan Show and much more.

Bill Eppridge, 75, of New Milford, Conn., a contract photographer for LIFE magazine at the time, is responsible for 33 of the 84 photographs in the exhibit. He was initially assigned to cover The Beatlesâ€™ airport arrival on Feb. 7, 1964. Instead, he photographed and chronicled their first six days in America.

When Eppridge arrived at John F. Kennedy International Airport, he knew that long-haired musicians from England â€œwho have caused a bit of a stirâ€ were about to land.

â€œI thought this would be â€˜four guys getting off a plane,â€™ but it turned out to be so much more,â€ Eppridge recalled. â€œHalf of the New York photographer news corps was out there.â€

Many members of the press expected a surly, possibly drugged out, rockâ€™nâ€™roll quartet to stumble off Pan Am Flight 101, but were instead charmed by The Beatles, he said.

He added, â€œThere was something going on. I could feel it.â€

Unlike today when photographers typically deal with agents and handlers, Eppridge spoke directly with The Beatles.

Ringo Starr asked of him, â€œAll right Mr. LIFE photographer, what can we do for you?â€

â€œI told him, â€˜Mr. Starr, just be yourselves and this will be painless,â€™â€ Eppridge responded.

During those six days, Eppridge shot nearly 100 rolls of 36-exposure film. Four photos were selected for use with LIFEâ€™s Feb. 21, 1964 article "Yeah-Yeah-Yeah!" Eppridgeâ€™s negatives went missing for several years before making their way back to him 1994. He is planning a book of his Beatles photography next year.

â€œAs time goes by, you come away with a greater realization of what you have done,â€ Eppridge said.

While Eppridge never photographed the Fab Four again, he captured other historic moments for LIFE, National Geographic and Sports Illustrated.

He followed Robert F. Kennedy in the months leading up to his assassination on June 5, 1968 in Los Angeles.

Eppridge said he and other journalists viewed Kennedy as â€œtotally recklessâ€ for failing to take stringent security precautions in the wake of his brotherâ€™s assassination nearly five years earlier.

Eppridge said he was standing 12 feet behind Kennedy when the fatal shots rang out.

â€œHaving been in Vietnam, I knew what incoming sounded like. The only thing I was wrong about was that I thought it was .25 caliber and it was .22,â€ Eppridge recalled.

Eppridge photographed the slain presidential candidate on the floor of the Ambassador Hotel.

Bill Eppridge will share reflections on his memorable career at the Dâ€™Amour Museum on April 21 at 2 p.m.

IF YOU GO
Exhibit: â€œThe Beatles! Backstage and Behind the Scenesâ€
When: Tuesday through June 2
Where: Michele and Donald Dâ€™Amour Museum of Fine Arts in Springfield
Cost: Adults, $15; seniors and college students, $10; ages 3 to 17 year, $8; ages 2 and under and museum members, free. Admission includes all four Springfield Museums. Springfield residents receive free general admission with proof of address
For more info: Call (413) 263-6800 or online at springfieldmuseums.org
Bill Eppridge will be in atendance during the AIPAD Photography Show in New York at Monroe Gallery of Photography, Booth #419, April 2 - 7, 2013.