The human condition through the lens 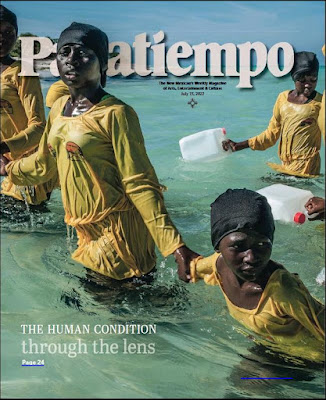 The 44 photos adorning the walls at the Monroe Gallery of Photography offer an unvarnished look at the human condition — tracing an emotional range from tender love to the fallout of hatred.

Many showcase the human spirit’s perseverance through challenges or trauma, while others are provocative reminders of recent history that some people would rather ignore or forget. That’s part of the point of Imagine a World Without Photojournalism, an exhibit that runs through Sept. 18 and includes a selection of art that has been shown throughout the gallery’s 20-year history.

The Monroe Gallery’s exhibit represents about a century of photojournalism. Gallery co-owners and spouses Sid and Michelle Monroe say the exhibit’s photographs were selected based on “individual universal relevance,” with each representing an important subject of social and political history.

In a way, records of historical events were created by painters for hundreds of years, if perhaps with less fidelity to the truth. As a result, accounts of historical events could come years — even centuries — later. The invention of photography in 1826 changed that, opening the door to real-time documentation of events and the work of photographers such as Mathew Brady, who defined our notion of the in-between moments of the Civil War. 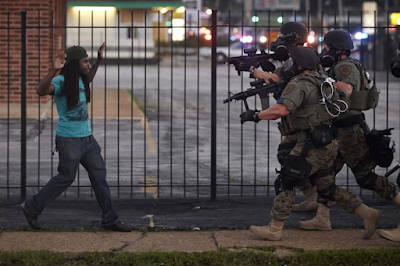 Whitney Curtis, Rashaad Davis, 23, backs away as St. Louis County police officers approach him with guns drawn and eventually arrest him in Ferguson, Missouri, on Aug. 11, 2014; courtesy of Monroe Gallery of Photography

Modern photojournalism, though, began in the mid-1920s with the invention of the Leica, a portable camera using film able to capture movement.

Some photojournalists have gained fame for their work, such as Robert Capa, who documented war and whose photo of chaos on Omaha Beach in France on D-Day is part of the Monroe exhibit. Others are lesser known, despite producing iconic images, such as Eddie Adams. His name might not ring a bell, but his 1968 photo of the street execution of a Viet Cong prisoner in Saigon is an iconic symbol of the brutality of war.

Some of those photos might have been viewed differently had they been taken recently, Sid says. 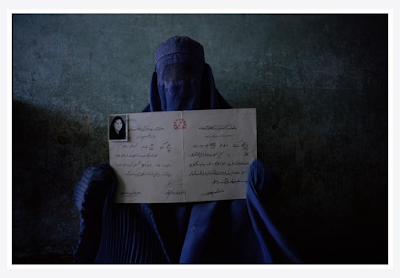 “One of the challenges journalists are facing is just the outright denial of reality,” he says, adding that some visitors get defensive when confronted with uncomfortable truths.

At least one of the images in the exhibit has created a stir elsewhere: A 2019 photo by Grant Baldwin was removed from a public museum in North Carolina in June. It depicts two men kissing at a Pride parade in Charlotte, North Carolina, while people in the background cheer and take pictures.

County Manager Kim Eagle ordered that the photo be removed from the Gaston County Museum, a move backed by at least two county commissioners there. 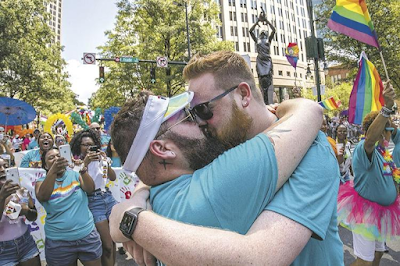 While some images are divisive, Sid says, others are noteworthy for their unifying qualities. He cited as an example the iconic World War II shot of six Marines raising a flag at Iwo Jima, which is included in the Monroe Gallery’s exhibit. Joe Rosenthal captured the image on the Japanese island in 1945.

After the Sept. 11 attacks, “a photographer happened to capture these firefighters who took a flag off a boat that was docked near the towers, and they were putting it up on a column that had survived,” he says. “And then it was immediately seized upon, like, ‘Oh, this is a rally moment for America after 9/11.’ Well, we need [calls to rally]. Because most of these situations require sacrifice. Ukraine requires sacrifice. World War II required sacrifice. And so in order to galvanize the effort, you need that imagery to bring you all together.”

Selecting images for the exhibit wasn’t an easy task.

“You could do an entire museum, like, three floors and 200 pictures, and still not really tell the full story” of photojournalism, Michelle says. 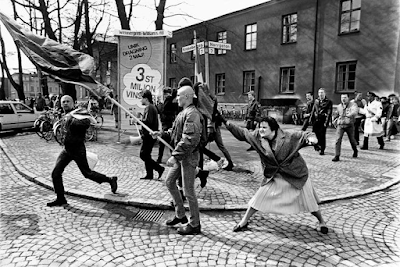 Hans Runesson, A woman hitting a neo-Nazi with her handbag (Vaxjo, Sweden, 1985); courtesy of Monroe Gallery of Photography

Part of that story is simply the power of an image viewed on a white wall, not accompanied by distractions on a computer screen.

“I often ask people in the gallery, ‘I wonder who’s benefiting from us thinking that we can’t be friends even though we think differently?’” she says. “As I like to say to my kids, don’t be an unpaid intern for someone. Because that’s what we’re doing for those people that are benefiting from separating us. We haven’t even examined how we really feel.”

The Monroes don’t aim to influence how others feel, they say.

“There’s never an agenda to the exhibit in terms of a viewpoint,” Sid says. “This is what happened. This is history.” 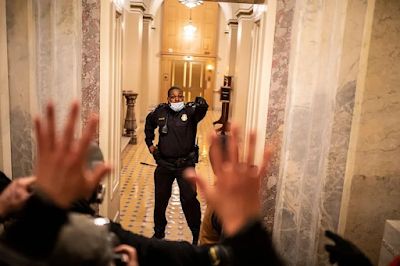 ▼ Imagine a World Without Photojournalism
▼ Through Sept. 18
▼ Monroe Gallery of Photography, 112 Don Gaspar Ave.
▼ 505-992-0800, monroegallery.com
▼ Also, “Threats to Photojournalism,” a panel program with photographers Nina Berman and David Butow, 5:30 p.m. July 22, at the gallery or via Zoom. RSVP required