"THE MAN WHO SHOT THE SEVENTIES" 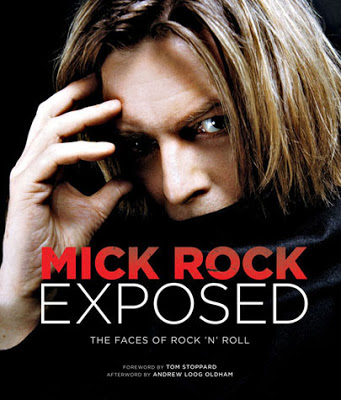 
Mick Rock's photo career began with him sneaking his camera into rock shows; it ignited when he started shooting a practically unknown David Bowie in 1972 and then went on to document the rise and fall of Ziggy Stardust. Since then Mick's become a legend himself, shooting a who's who of rock, punk, and pop icons and capturing the images of stars right as they became part of the pop firmament. Exposed collects 200 of his best photos across nearly 40 years, including unforgettable images of Syd Barrett, Lou Reed, Blondie, Queen, Iggy Pop, the Sex Pistols, the Yeah Yeah Yeahs, the Killers, Lady Gaga, U2, and many more. Featuring a revealing introduction, narrative captions, and an illuminating foreword by playwright Tom Stoppard, Exposed is a gorgeous visual celebration for music fans.

Michael David Rock was born in west London and earned a scholarship to Cambridge where he studied modern languages, graduating in the late sixties. It was the expressive seduction of subversive poets of yore rather than finite imagery that encouraged Rock to explore his own creative expression. "I discovered the lives and works of the great Bohemian poets, like Baudelaire, Rimbaud, and Nerval. They were my heroes".


"London in the late sixties and early seventies was a hotbed of creative interchange. The prevalent hippie philosophy united all manner of artists, musicians, film makers, models, designers, actors, writers, and photographers into a unique and fertile community. My timing was excellent. Curiosity and circumstance drew me into the flame of rock ‘n’ roll." -- Mick Rock

Rock became intensely interested in the artists and performers at the cutting edge of their time who were not afraid to cross the line. This was the atmosphere in which Mick Rock began his collaborations with the artists of the new decade. The first band Rock photographed was the Pretty Things in 1969; soon he was photographing the likes of Syd Barrett, David Bowie, Lou Reed, Queen, Roxy Music and Iggy Pop, emerging artists who would rapidly become international stars. “They were all special people to me. They weren’t “stars” when I first met them. To me, they were free spirited visionaries. I was in the right place at the right time, you can't plan that. That's just something you can't prescribe in life.”

He was soon traveling back and forth between London and New York, on tour with emerging artists such as David Bowie and Iggy Pop and capturing the music scene in all its decadent glory. Rock was instrumental in creating many key rock 'n' roll images of the time, such as Lou Reed's Transformer, Iggy Pop's Raw Power and Queen's Queen II, leading to his being called “The Man Who Shot The Seventies”.

In 1977, Rock moved permanently to New York, and quickly immersed himself in the burgeoning underground new wave scene, capturing the nihilistic spirit of the music of the Ramones, Blondie and the Talking Heads. As rock and roll has evolved, Rock has continued to capture the essence of the fresh and new. Mick Rock has been instrumental in creating many key visual images of the last three decades. His photographs have been called as significant as Andy Warhol’s paintings in constructing the images we hold in our minds of the larger-than-life figures of our popular culture. Rock’s accomplishments extend beyond photography and include art direction, music video production and three Grammy nominations.

In recent years, Rock also has published several books, including A Photographic Record. Recently released is his retrospective of the Glam Rock scene titled Blood & Glitter; a retrospective of Syd Barrett photographs titled Psychedelic Renegades; Moonage Daydream, a co-collaboration with David Bowie of the Ziggy Stardust era; and Killer Queen, with a foreword written by Queen guitarist Brian May.

Mick Rock's photographs have helped define the image of rock 'n' roll, and have been featured on numerous album covers and in solo exhibitions around the world. Monroe Gallery is pleased to represent Mick Rock's iconic photography, and was instrumental in his re-emergence in the late 1990's - organizing his first gallery exhibition in New York in 1997.