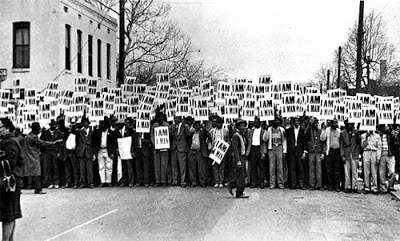 The photographer Ernest C. Withers had the good fortune to find himself at the right place at the right time, if Memphis in the 1950s and ’60s could possibly have been the right place and time for any African American. He must have been sometimes nervous as he navigated the byways of his native city and of the larger American South during that era of racial apartheid. Nonetheless, he showed a canny talent for observing trouble from close up without having it consume him personally. People let him get near, but he kept his photographer’s distance. This essential skill enabled to him to produce an extraordinary portfolio documenting the summit events of the civil-rights era.

On Friday, Oct. 4, an exhibition of his work opens at the Monroe Gallery of Photography, where it remains on display through Nov. 24. Sidney and Michelle Monroe have curated the show, which displays 40 photographs from an archive that runs well into the thousands. “In selecting the prints,” Sidney Monroe said, “we have tried to highlight images of the greatest significance from when Memphis was an epicenter of African-American life. Obviously, that means a number of images relating to civil rights, but Memphis was also a center of music at that time, and baseball was flourishing there. This was all part of the world Withers documented.” 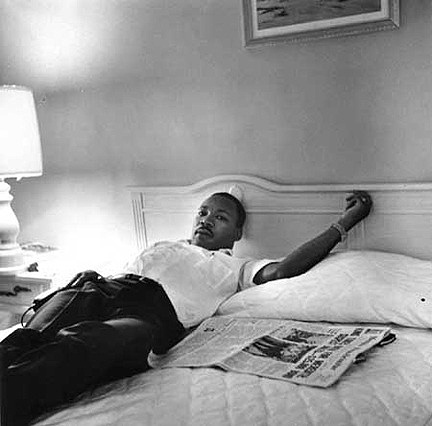 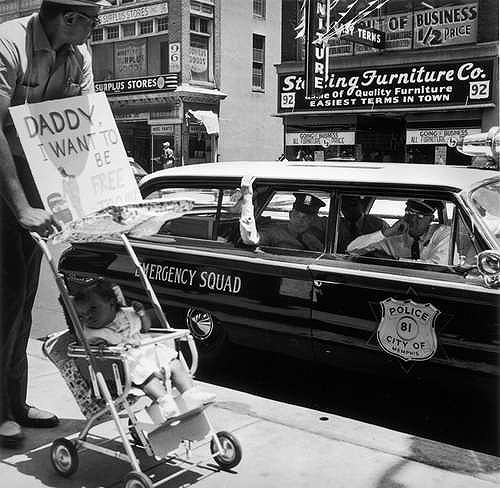 Out for a stroll
The greatest examples of photojournalism document and convey a clear story with striking aesthetic elegance. Many of the photographs in Monroe Gallery’s Ernest C. Withers exhibition are masterly in that regard. From 1961 comes an image of a Memphis man pushing a baby girl in a stroller in the midday sun before the threatening gaze of four officers in a police car marked “Emergency Squad.” Like any responsible photojournalist, Withers does not consign the principals in this image to anonymity — at least not the principals who have his sympathy. The attached caption reads: “William Edwin Jones pushes daughter Renee Andrewnetta Jones (8 months old, who grew up to become a doctor) during protest march on Main St., Memphis, Tennessee, August, 1961.”
The frame is jam-packed with information, yet it is pleasingly structured, two commercial buildings in the background essentially bisecting the image vertically, with the father and daughter inhabiting the left side of the foreground and the policemen the right, even as the cruiser and the sidewalk cut a horizontal-diagonal swath across the frame. The police insignia on the car door identifies the place as Memphis. Around the neck of the man with the baby in a stroller hangs a large sign picturing … a man with a baby in a stroller. Its text proclaims, “Daddy, I Want To Be Free Too!!!!” The father and the four policemen train their eyes on one another. This unfairly stacked balance of power generates terrific tension, but the baby girl is focused elsewhere. She looks away from the scene, directing her eyes out of the frame directly to the camera, practically forcing the viewer to say, “What am I going to do about this?”
Sidney Monroe shared some of his thoughts about this photograph. “Images like this owe much to timing and, to some extent, luck — although it’s not just through luck that the photographer made such a picture. I imagine Withers, like many of the best photojournalists, would have said that you actually envision a picture before it happens. I’m picturing him walking around while people are dispersing after the event, and he notices the police car. I imagine him deciding to hang around the police car; there might be an interesting picture here. He’s having the foresight to wait. He may have already made other pictures, but then here comes this father, with the stroller, the baby, the sign. Withers is ready. It’s not luck so much as that Withers is ready for some interaction, and that is when he takes the picture. The greatest talent a photographer can have is patience. You can’t make a picture happen. You’re prepared for it when it does happen.”
— J.M.K.
Thank you for reading 10 free articles on our site. You can come back at the end of your 30-day period for another 10 free articles, or you can purchase a subscription at this time and continue to enjoy valuable local news and information. If you need help, please contact our office at 505-983-3303.