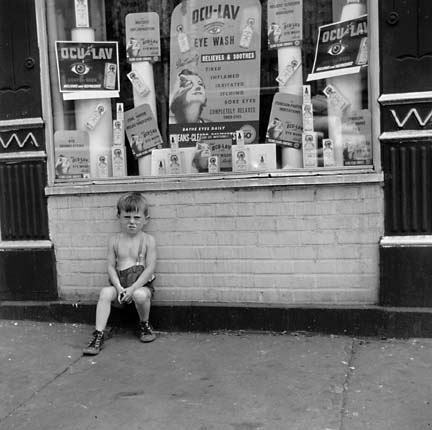 "Ms. Cherry was drawn to the Photo League because the work of its members tended to avoid the soft-focused, painterly style of the day. “I was in a fantasy world when I was a dancer,” she said. “And this was reality. And so much was going on in that period. And I wanted to be part of it.”
She was interested New York’s poorer neighborhoods. “Maybe I identified with them more,” she said. And she wanted to tell a story. She recalls the shock she felt when she came upon the scene of her 1947 photograph “Playing Lynched” (Slide 8). “The interesting thing about it was that this was in East Harlem,” she said. “And it wasn’t only black kids. They interchanged parts.”

Vivian Cherry was born in New York City. While performing as a dancer on Broadway and nightclubs in the early 1940s, she began working as a photographic printer in the darkroom for Underwood & Underwood, a prominent photo service to news organizations. It was here that Cherry became a talented printer. Wanting to further her interest in photography Cherry joined the Photo League, an organization formed by professional photographers in the 1930s to teach and support the art of photography. She studied with Sid Grossman. Soon Cherry was selling her photographic essays to such publications as Life, Look, Popular Photography, Sports Illustrated and Redbook. Then later, she was given assignments by Colliers, Pageant, This Week, Jubilee, Scope, and other magazines. Cherry was one of a handful of women at the time to be given assignments by such major publications. Cherry also made several short films and worked with the photographer Arnold Eagle as a still photographer on a film about Lee Strasberg and the historic drama school, the Actor’s Studio.

Over the years Cherry has traveled and photographed extensively in New York City, West Virginia, Georgia, England and Mexico. Although her photographs cover a wide range of cities, the images are universal. Through her lens she captures everyday life of the children, men and women on the streets of the world. One is hard pressed to distinguish between the old stodgy men on the sidewalks of London and the ones sitting on a bench in Washington Square park. Or to see any differences in the somber and sullied faces of the children in Hell’s Kitchen and the ones in the alleyways of England.

Likewise, the sense of weariness and forlorn gazes are not lost on the viewer when comparing the two images of the elderly woman from the Blue Ridge Mountains in Georgia and the older women riding the Third Avenue El in New York City. It seems that no matter what street corner she is on, Vivian Cherry has the innate ability to look through her camera and produce a portrait that reflects a sense of life that is both timeless and ageless.

In 2000 The Brooklyn Museum of Art presented a major exhibition of Vivian Cherry’s photographs. Vivian Cherry is still actively photographing, and the book “HELLUVA TOWN: Vivian Cherry's New York of the 1940s-1950s”will be published in 2007.

“These photographs are of work done over a half a century by a gifted artist who represents the countless photographers who turned us into a nation of observers who still get most of their information from imagery. This is the personal statement of the impersonal world as viewed by a "Working Street Photographer". -Barbara Head Millstein, Curator of Photographs, Brooklyn Museum of Art