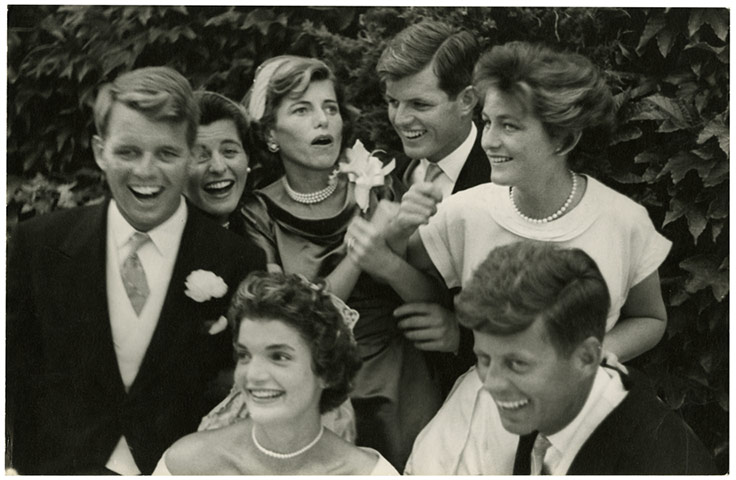 Toni Frissell
Jackie and the Kennedys, Wedding day in Newport
John G Morris: "Toni Frissell, whose work appeared mostly in Vogue, was the family photographer at the wedding of Jack Kennedy and Jacqueline Bouvier – "Jackie." She gave me prints for the Magnum story, which I sold to the Ladies’ Home Journal for $100,000. This is perhaps the most rare, as it shows the three Kennedy daughters, Patricia, Eunice and Jean, with the three then surviving sons, Bobby, Ted and Jack. The eldest son, Joseph P Jr, had died as a pilot in World War II"

The 230 photographic prints for the sale will be exhibited for three days in Paris at Drouot Montaigne, 15 avenue Montaigne on Thursday and Friday 28-29 April from 11:00 to 18:00 and Saturday 30 April from 10:00 to 13:00. The exhibition is open to the public and a fully illustrated paper catalogue will be available for 30 euros.

In our visual age, photo editors have silently written history behind the scenes. John G. Morris has participated in the greatest photographic chapters of the 20th century. Perhaps best known as Robert Capa’s picture editor for Life magazine on D-Day, Morris’s impact on the visual lexicon spans nearly seventy-five years. While at the Ladies’ Home Journal, he conceived of the series, People are People the World Over, changing the way America viewed the world and inspiring Edward Steichen’s influential Family of Man 1955 exhibition. As the first Executive Editor of Magnum Photos, Morris played a key role in establishing many standards of practice in photojournalism, from story boarding to distribution. At The Washington Post, he balanced images inside the White House with coverage of the conflict in Vietnam. As picture editor for The New York Times he chose the first images of the moon landing published in color.

Morris moved to Paris in 1983 where he worked for nearly a decade as correspondent and editor for National Geographic. In May 2010, John G. Morris was honored with a Lifetime Achievement Award by The ICP, International Center of Photography.

The photographs in this memorable auction are both personal gifts from the artists to John and creative working prints completing the visual diary of John G. Morris. The verso of each print in this collection is inscribed by hand to share the stories behind the images and celebrate John’s enduring friendships with the photographers themselves.

Speaking from his home in Paris, where he has lived since the early 1980s, Morris said: "My hope is that this auction will change the outlook on photojournalism in the money markets. I know that's a strange thing to say, but photography auctions in the past have consisted primarily of aesthetically beautiful prints which did not necessarily have much to do with telling the truth about life through the daily newspapers and in magazines. As far as I know, this is the first photojournalism collection to come on to the art market," said Morris. "So in setting minimum prices for the pictures, and estimates, it's been a sort of ballpark thing. We don't know what will sell and what won't." Read more from the Guardian newspaper.


The Guardian newspaper also has an excellent slide show of selected images with commentary from Morris.

"Veteran Life magazine picture editor John G Morris talks us through some of the photographs from his extraordinary personal collection that are to be auctioned in April 2011". 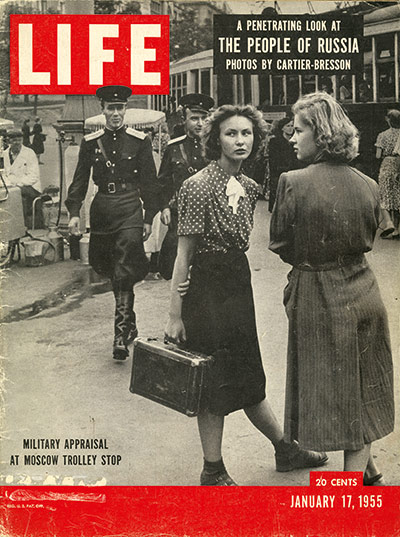 ﻿Henri Cartier-Bresson
Military appraisal at Moscow trolley stop, 1954 (Life cover)
John G Morris: "This is the photo I recommended to managing editor Ed Thompson of Life when he asked me, 'What do you see for a cover?' In December I came back from Paris with hundreds of prints of the USSR, I remember the customs officer asking me how much they were worth (in 1954) I replied: 'That’s what I am here to find out'."