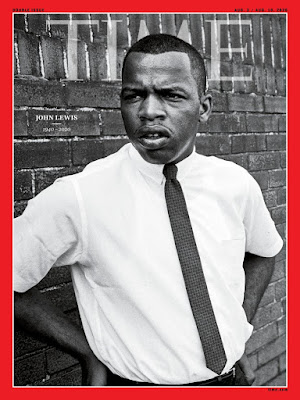 'It's a Picture of Someone Who Knows Who He Is.'
The Story Behind TIME's Commemorative John Lewis Cover


In 1963, Steve Schapiro, then 28, was on assignment for LIFE magazine, photographing prominent civil rights activists, from James Baldwin to Fannie Lou Hamer. One day, while following Jerome Smith, a participant in the Freedom Rides that raised awareness of interstate bus segregation, he went to Clarksdale, Miss., to document one of the many training sessions that were taking place in church basements across the South. In those meetings, volunteers studied how to react to the racism they would encounter in their work. That day in Clarksdale, as Schapiro watched a line of ministers file into the church, he noticed among the group another well-known Freedom Rider, in a tie and button-down shirt: John Lewis. He asked Lewis if he could take his photo, and the young man agreed.

Weeks later, Lewis would become the youngest person on the speakers’ slate at the March on Washington for Jobs and Freedom, addressing some 250,000 people from the Lincoln Memorial as the chairperson of the student arm of the 1960s civil rights movement, the Student Nonviolent Coordinating Committee (SNCC). Lewis, then 23, went on to represent Atlanta in Congress for three decades until July 17, when he died at the age of 80 after a battle with cancer. The picture Schapiro shot more than half a century ago is featured on the cover of the Aug. 3-10 issue of TIME, which dives into Lewis’s life, career and legacy.

“You can feel the determination in him to be who he is,” Schapiro tells TIME, reflecting on the photograph. “In this picture, you see he’s looking forward with an enormous amount of strength, in terms of how he sees the future. It’s a picture of someone who knows who he is, knows what he has to do, and for the rest of his life, after this picture, he did it.”


After that moment, Schapiro kept following the civil rights movement, too. He would go on to cover the March on Washington and voter registration efforts throughout the South. He covered the march from Selma to Montgomery, Ala., photographing Martin Luther King, Jr., Ralph Abernathy, Andrew Young and Rosa Parks. LIFE also sent him to Memphis to cover the aftermath of Martin Luther King Jr.’s assassination on April 4, 1968. In recent years, Schapiro, now 85 and living in Chicago, has covered the Black Lives Matter movement.

Schapiro says Lewis saw the photo in 2014, after the Monroe Gallery exhibited it, and Schapiro sent Lewis a signed copy. Then, in 2015, Schapiro saw the Congressman in person for the first time since 1963. As the nation marked the 50th anniversary of the march from Selma to Montgomery, the two saw each other at different events where veterans of the 1960s civil rights movement gathered. Lewis told Schapiro that 1963 image was one of his favorite photos of himself; Schapiro says that earlier this year, aides to Lewis reached out to him requesting a version of the photo for a belated birthday party for the Congressman.

“This is who he was in his time,” the photographer says. “Let’s see who you are in your time.” 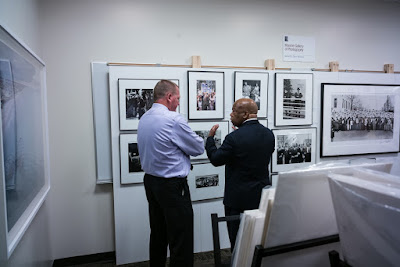