'This is one of the most powerful photographic shows I have ever seen and, certainly, in my opinion, the best Santa Fe has ever had the privilege of hosting.' 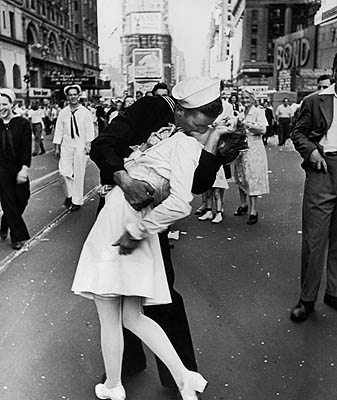 Via SantaFe.com
By Tom McQuire

16 July, 2011
Culture vulture
Historyâ€™s Big Picture
I have always been amazed with, not only the scope of the collection housed at Monroe Gallery of Photography â€“ both in gallery shows and those items that rotate in and out of storage, but also the myriad ways in which owners Sidney and Michelle Monroe have placed these images in relevant shows throughout the ten years that the gallery has graced Don Gaspar, just off the Plaza. Their latest show, History's Big Picture, is by far the most compelling show they have ever mounted. Its appearance in this tenth year after Sid and Michelle moved their gallery to Santa Fe from Manhattan following the  Sept 11th attacks, takes us on a journey through the history of our country and the world, before and after the events of that fateful September day. Having seen the show on July 4th, I will be forever changed by the images on those walls.
With History's Big Picture Sid and Michelle mine the depth and breadth of Monroe Gallery's archives; combined with new, never-before exhibited photojournalism masterpieces, from the early 1920's to the present day.
From Ed Clarkâ€™s poignant image of a Navy CPO Graham Jackson playing in tribute to FDRâ€™s coffin passing on a train, through the somber reality of Carl Mydans photograph of commuters on the 6:25 25 from Grand Central to Stamford, CT, November 22, 1963 reading of John Kennedyâ€™s assassination and the euphoria of the events of Woodstock, 1969 by Amalie R. Rothschild; we arrive at Eric Smithâ€™s haunting and thought-provoking image of an empty auditorium just prior to the funeral for a soldier who died in Iraq in 2006. In this show we see the great arc of our countryâ€™s history. This is one of the most powerful photographic shows I have ever seen and, certainly, in my opinion, the best Santa Fe has ever had the privilege of hosting. Bravo Sid and Michelle!
The show remains up at Monroe through September 25th.