To Do Friday: Sid Avery Exhibit 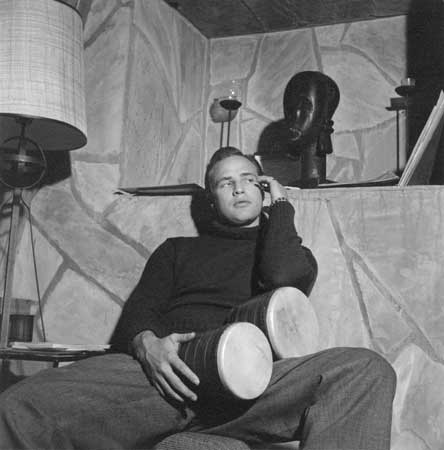 Popular culture can thank the late Sid Avery for some of the most candid and intimate shots of Golden Age Hollywood celebrities.

His were slice-of-life photographs that revealed a different side to the icons of the day: real, non-posed images of Dean Martin hamming it up inside a hotel room; Rock Hudson taking a phone call wearing nothing but a bath towel; Marlon Brando playing an impromptu bongos set; Elizabeth Taylor basking in the Marfa, Texas sun on the set of Giant.

â€œHe had an innate ability to get people to relax and be themselves in front of the camera,â€ Averyâ€™s son Ron tells SFR. â€œHe was also a naturally intuitive, bright guyâ€”not necessarily school smart, but street smart, I think, is what you would call it.â€

Based in Los Angeles, Ron continues his fatherâ€™s legacy at the helm of the Motion Picture and Television Photographic Archive, which handles his dadâ€™s and other celebrated photographersâ€™ bodies of work. Heâ€™s also personally overseeing Monroe Galleryâ€™s upcoming The Art of the Hollywood Snapshot exhibit, concurrent with the publication of an eponymous book.

Legendary as he was, Avery doesnâ€™t think his father would fare too well in todayâ€™s tabloid-driven, crotch-shot-hungry insta-market.

â€œHe wouldnâ€™t print or let a picture be published if the celebrity had an unflattering look on their face, or [if] it just wasnâ€™t showing them in a good light,â€ Avery says. â€œI donâ€™t think he ever really pissed anybody off, either. Today, people are published picking their nose or doing whatever in publicâ€¦or not even in public.â€

Sidâ€™s approach was such, his son recalls, that he managed to win over even the toughest subjects like Humphrey Bogart, who at first was apprehensive, and eventually invited the photog on sailing excursions.

Avery also developed an affinity with other giants of the time, such as Ernest Borgnine and Audrey Hepburn. He was one of the select few outside Frank Sinatraâ€™s circle, his son points out, allowed to refer to the crooner simply by his first name.

â€œYouâ€™ve just got a feeling that, â€˜Wow, this is what it really would have been like to just sit in these peopleâ€™s houses, or ride with them in the car or be with them,â€™â€ Avery says of his progenitorâ€™s style.

The imagemakerâ€”who at one point served in the Army Pictorial Service during WWIIâ€”would later delve into the world of advertising and directing, and was the man responsible for the notorious Ricardo MontalbÃ¡n Chrysler Cordoba campaign.

Along with a slew of memorable pictures, the show also includes â€œfresh and differentâ€ never-before-seen outtakes and contact sheets, Ron adds, allowing attendees to take in the full grasp of Averyâ€™s career.

â€œI think this is a real good compilation of where Dad started, where he wound up and everything in between,â€ Ron says. â€œBecause we pretty much cover him from before the war until [his passing in] 2001.â€