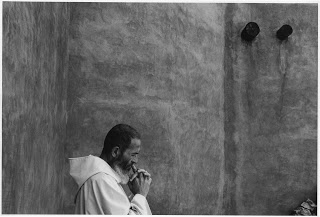 A time to refocus

By Kathaleen Roberts / Journal Staff Writer
The photographs reveal the sacred slant of light slicing across bowed heads, a solitary figure trudging up a snowy hill toward the chapel, loaves of freshly baked bread cooling on a wooden tabletop.

Tony O’Brien photographed Christ in the Desert Monastery for one year and discovered his own personal solace. The photographer’s dramatic black and white series forms the heart of “Contemplative Landscapes,” opening at the New Mexico History Museum Oct. 23.

Imprisoned by the Afghan secret police for six weeks while on assignment for Life magazine in 1989, O’Brien sought refuge and perspective at the Benedictine monastery. He returned to do a story in 1994 and in the process became a member of the community. His year-long spiritual sojourn granted him rare access to daily life in a community living a tradition dating to the Middle Ages. The monastery’s seclusion encouraged focus on St. Benedict’s guiding tenets –– hospitality, humility, acceptance and perseverance. He excavated the canyon deep within himself.

"I probably didn’t realize at the time that it was an opportunity for me to put a little closure to some things in my life that came out of prison and to understand who I was,” said O’Brien, now teaching photography at Santa Fe University of Art and Design.

The photojournalist had worked for both the Albuquerque Journal and the New Mexican and covered the Gulf War, as well as the violence in Northern Ireland, Central America, Pakistan, India and finally Afghanistan. He had visited the monastery and befriended some of the monks.

Before his capture, he had been working in Peshawar covering the war between the Soviets and the Afghan Mujahideen. There was a bounty on western journalists, especially Americans. O’Brien traveled to Kabul to meet with a network of guerrillas in a safe house.

“The commander in charge of my little group sold me out,” he said.

At first he was put in relatively solitary confinement with two Afghans.

“We never saw anyone,” he said. “I came back one day after interrogation and one of my cell mates was gone. You never knew what happened.”

Roughed up, but not beaten, he said most of the abuse he endured was psychological.

“You got shoved around a bit, but once I was in prison, it was the interrogation, never having the lights off, waking you up in the middle of the night.”

“Sometimes I’d be in interrogation for 12 hours,” he continued. “I didn’t exist in the world anymore because nobody knew where I was.”

He began re-examining his life. Hope arrived in the form of his cellmate Nadr Ali, a practicing Shiite Muslim. O’Brien watched Nadr Ali say his prayers five times a day and soon joined him in his own prayers, following the Muslim cycle. The pair even crafted their own prayer beads.

In captivity, O’Brien collided with his own vulnerability.

“When I was captured, one of my first thoughts was ‘Oh my God, I’m never going to see my mother again’,” O’Brien said. “That was shattering.” It was through Nadr Ali’s faith and trust in God that he endured.

“He was just an ordinary guy and he turned out to be one of the strongest individuals I’ve ever met. That doesn’t mean I didn’t sink into the abyss,” O’Brien said. “I give a lot of credit to Nadr and his faith. This was a Muslim –– the bad guys.”

Raised Catholic, but no longer practicing the faith of his childhood, O’Brien had long been fascinated by the Benedictines and monasticism. The similarities between monastic life and prison were not lost on him.

“I always thought it was funny,” he said. “I had a cell in Afghanistan and I had a cell at the monastery.
“It was the quiet and the solitude that drew me,” he continued. “At the same time, there was that sense of community. These monks are on their own individual journeys, but they do it in community.”

At first, O’Brien stayed in the guest house. But he quickly realized the separate quarters would always render him an outsider. The monks agreed to allow him to join them in his own cell. He rose with vigils at 4 a.m., chanted the psalms, celebrated the triumph of life over death, light over darkness in a life defined by prayer. He waited nearly a month and a half before he began taking pictures.

“By the time the project ended, even though I was the photographer, I wasn’t the photographer,” he said. “If I lifted my camera, nobody paid any attention. It was almost like having another family. I feel very blessed for that.”

The project changed the way the deadline-driven photographer worked.

“I came out of the newspaper/magazine business,” he said. “(I learned) it’s OK, slow down. If you miss it, something else will come along. Keep it simple. Watch it evolve. Another gift I got was I learned it was OK to say I don’t know.”

But perhaps most profoundly, the tiny monastery tucked between the canyon walls along the Chama River changed him spiritually.

“It allowed me to become more at peace with who I was and with my beliefs,” he explained. “Part of it all is the struggle and the questions. It’s how you live on your quest for God. Each individual is on their own journey, but you’re in a community and that’s how you get your strength to carry on.”