Trove of John F. Kennedy Photos Sold for Over $150,000 at Auction in New York City President John F. Kennedy being visited by his children Caroline and John Jr., in the Oval Office of the White House in Washington during October 1962. AP Photo/Bonhams, Cecil Stoughton
Via The Art Daily:


NEW YORK (AP).- A trove of John F. Kennedy pictures by White House photographer Cecil Stoughton (STOW'-tuhn) fetched over $150,000 at a New York City auction. It included a rare image of Marilyn Monroe with the president and Robert Kennedy at a Democratic fundraiser.

The collection of 12,000 photographs was estimated to bring in $200,000. It was offered by Stoughton's estate at Bonhams auction house Thursday. 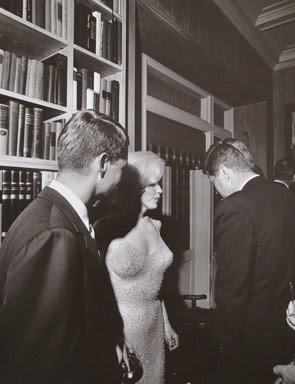 "It's the only image of the three of them together," said Matthew Haley, Bonhams' expert for books, manuscripts and historical photographs. "There are very few prints of this photo." (Please contact Monroe Gallery of Photography for details)

Stoughton was the first official White House photographer. He captured public as well as intimate Kennedy moments. About 60 percent of the images are of public events. The rest are of private moments: the children's birthday parties, family Christmases, and vacations in Hyannis Port, Mass.

One of Stoughton's most famous images shows Lyndon B. Johnson being sworn in aboard Air Force One following Kennedy's assassination Nov. 22, 1963. The photo shows Johnson with his hand raised taking the oath of office surrounded by his wife and Jacqueline Kennedy still wearing her blood-splattered dress.

"It is one of the most iconic images of the 20th century," said Haley.

Johnson signed it: "To Cecil Stoughton, with high regards and appreciation, Lyndon B. Johnson."

In the immediate chaotic aftermath of the assassination, Stoughton learned that Johnson was being sworn in on the aircraft on a Dallas airfield and rushed over in a car, said Haley. As he was running across the tarmac, "the Secret Service thought it was another assassination attempt and almost fired at him," he said.

Haley said Stoughton's camera jammed just as Johnson was about to be sworn in but he gave it a good shake and it starting working again.

The Monroe picture with the two Kennedy brothers was saved from being destroyed by the Secret Service. It was taken at a private Manhattan residence right after the actress infamously sang "Happy Birthday" to the president at Madison Square Garden in a simmering tight dress.

Haley said, "There apparently was a directive to the Secret Service that Monroe not be photographed with the president."

Among the more intimate photos of the Kennedy family is one from 1962 that shows the president sitting in a chair near his desk in the Oval Office while his children, Caroline and John-John, dance before him. It's inscribed by Kennedy: "Captain Stoughton â€” who captured beautifully a happy moment at the White House, John F. Kennedy."